Knowledge About Ignorance New Directions in the Study of Political Information

much about politics for that reason, widespread ignorance is a phenom-

able future. The challenge for democracy is to ﬁnd a way to minimize

the harm that political ignorance can cause.

Assuming that we shud keep a democratic government form, then yes, this is correct. Altho, giving people more power shud, according to this theory, also result in them taking more time to educate themselves. That’s an interesting and optimistic implication.

Here, I want to emphasize a different shortcoming of shortcuts, one

that was partly anticipated in Converse’ s #$%! paper. Both empirical ev-

idence and the theory of rational ignorance suggest that most voters

acquire political knowledge not primarily for the purpose of casting a

more informed vote, but for entertainment purposes or to satisfy other

psychological needs. If this is so, the shortcuts they use might likewise

ballot. Such voters could rationally choose not to evaluate the political

information they have in an objective way: a form of “rational irra-

tionality” (Caplan &””#). Again, such a choice need not involve precise,

conscious calculations about the costs and beneﬁts of evaluating politi-

cal information objectively . As with the decision to vote and the deci-

sion not to spend much time acquiring political information, the

choice not to put much effort into analyzing political information ob-

tle or no beneﬁt to engaging in such analysis.On the other hand, voters

stantial potential costs in terms of time and emotional stress.Thus, a de-

cision not to analyze political information rigorously could be an ex-

rational decisions but do not necessarily engage in rigorous calculation.

Such dynamics might often lead voters to use shortcuts that mislead

rather than inform. For example, the use of party-label and ideological

shortcuts led both voters and even many sophisticated political elites to

#$$!). Nixon presided over an unprecedented expansion of the welfare

insurance, and established closer relations with communist China and

the USSR. But he was still widely perceived as a right-winger. Simi-

rushed to condemn him, despite his endorsement of conservative poli-

issues. Liberals defended Clinton and conservatives attacked him in

dodger” and philanderer, rather than on the basis of his substantive

policies (Posner #$$$). In both the Nixon and Clinton cases, the desire

demn a perceived ideological adversary blinded them to important as-

pects of the president’s policies—despite the fact that information

about these policies was readily available.

Yes, those odd #”¤(“)# symbols seem to be a bug in the OCR’ing of the paper. Apparently, the OCR misinterprets numerals. Odd. Perhaps deliberate?

Recent evidence conﬁrms the possibility that even the most knowl-

mislead more than they inform. A study of experts in politics and in-

ternational relations ﬁnds that their predictions of political events are

usually no more accurate than would be produced by random chance

(Tetlock &””(). Of greater interest for present purposes is the ﬁnding

dictions on the basis of broad generalizations—that is, experts who rely

the most on ideological shortcuts (ibid., chs. *–().7 This result could be

interpreted as an indication that the experts in question are irrational.

However, most social-science experts are rewarded not for the accuracy

phistication of their scholarship. Similarly, pundits and other public in-

tellectuals are rewarded for their popularity with readers and viewers,

logues” can increase either their incomes or their professional standing

by improving the accuracy of the ideological shortcuts they use. As a

result, they , like ordinary voters, often have little incentive to use short-

cuts effectively , and considerable incentive to stick with shortcuts that

Interesting. Also reminds me that i really shud get around to reading the book Wrong: Why experts* keep failing us–and how to know when not to trust them, of which i unfortunately do not have an electronic copy… which means that i likely wont be reading it any time soon. Time has a review of it here.

In addition to arguing for the utility of shortcuts, defenders of the view

that widespread political ignorance is not a serious problem have main-

Wittman #$$(). According to this theory , if ignorant voters’ errors are

randomly distributed, then the “incorrect” ballots cast for candidate A

will be canceled out by similar mistakes in favor of Candidate B, and

the votes of the relatively well informed will determine electoral out-

This argument has a number of flaws, including the fact that the

well-informed minority that determines electoral outcomes in this sce-

ledger, the danger that voters may rationally rely on inaccurate and mis-

leading shortcuts suggests a particularly powerful reason why their er-

rors are unlikely to be random. On many issues, ignorance shows sys-

tematic patterns of bias in one direction or another (see, e.g., Delli

expected if voters, including even many relatively knowledgeable “ide-

ologues, ” are relying on opinion leaders, ideologies, and other shortcuts

that have been selected for reasons other than accuracy.

Recent research suggests that even the most sophisticated and highly

of elections for the presidency of the American Economics Association

powerful predictor of which candidate prevails in the voting (Hamer-

mesh &””(). The AEA electorate consists of academic economists who

are presumably knowledgeable about the functions of the AEA—and

presumably more committed to rational, maximizing behavior than is

the average voter in ordinary elections. If such voters nonetheless rely

on dubious information shortcuts, it is likely that voters in other elec-

tions are at least equally likely to do so.8

Interesting argument. Reminded my of wisdom of the crowds.

As for the influence of fysical attractiveness. Yeah.. I have for a long time been playing with the idea the politicians shud be anonymous for voting purposes. The idea is to get rid of such effects. I dont know how feasible that idea is. However, certainly, some improvements to the current situation can be made. For instance, outlawing election posters. They use the same effect/bias that ads also use, namely, the mere exposure effect. More rational TV-debates are also possible.

An important implication of the rational-ignorance hypothesis is that

available at low cost, rationally ignorant voters have little or no incentive

to spend time learning it and weighing its implications. This inference is

$knowledge levels over the last (” years, despite greatly increased educa-

tion levels and a parallel increase in the availability of information

of ambitious theories of democratic participation cannot expect most

In most modern democracies, government spending accounts for at

least a third of GDP , and the regulatory activities of the state extend to

almost all areas of life. In the United States, federal spending accounts

for &”.) percent of GDP , and state and local governments spend an ad-

ditional #*.’ percent.13 And the growth of government spending over

tiny fraction of all this government activity. Indeed, they probably

would be unable to do so even with considerably greater knowledge

than most of them currently possess.Other things equal, the greater the

size and complexity of government, the greater the likelihood that

many of its activities will escape meaningful democratic control.14 This

result is troubling both for those scholars who regard democratic con-

trol of public policy as an intrinsic good (e.g., Pateman #$'” and Barber

#$)!), and those who value it for purely instrumental reasons such as

the need to curb abuses of power by political elites.

I agree with the last reason mentioned, that is, reason we need some kind of democracy is to avoid abuses of power i.e. nepotism and then like (read the link for many interesting examples).

In a federal system, citizens dissatisﬁed with government policy in their

to address their grievances, or opting for “exit”: leaving for a jurisdic-

tion with more favorable policies (Hirschman #$'”).15 Those who

choose the exit option in effect “vote with their feet. ” Voice and exit

each have their respective strengths and weaknesses (ibid.). But one that

is largely ignored by most analysts is the comparative incentives they

The effectiveness of voice is signiﬁcantly constrained by rational ig-

norance. As we have seen, individual voters have little incentive to ac-

quire and effectively use relevant information about public policy . By

contrast, exit has the tremendous comparative advantage of creating

strong incentives for individuals to acquire the necessary information to

make decisions about where to live.16 A knowledgeable individual or

left behind remain ignorant. Thus, individuals are likely to put much

more effort into acquiring information about the best jurisdiction in

which to live than into acquiring knowledge about the right candidate

information than ballot-box voting, since the former does not entail

knowing which ofﬁcials are responsible for which policies. It also obvi-

ment policies from each other, and from the effects of background so-

information about differences in conditions between jurisdictions and

then make the decision to vote with their feet. For example, in the

early twentieth century , millions of poor African-Americans in the Jim

Crow-era South were able to determine that conditions were relatively

In order for foot voting to be effective, however, political power must

be at least partly decentralized. In a unitary state in which all or most

important policies are set by the central government, there is no exit

Obviously , foot voting is not a panacea for all the shortcomings of

government policy. For example, it cannot protect immobile people and

assets, such as property rights in land. And it is far from the only con-

students of federalism and institutional development.

Very interesting argument. So, we have been moving in the wrong direction in Denmark for some time now, it seems. Very interesting to wonder what wud happen if, for instance, drug laws were a matter of regional law not national. Certainly, this makes experimentation much easier. Experimentation obviously makes it easier to know what works, and what doesnt.

One note about such a form. Some central government is necessary (i suspect, havent done research), and it has the incentitive to try to acquire more power constantly by enacting new laws, precisely as we see it in the US.

One good thing tho. If we can avoid more centralization in the future, especially some kind of world government (basically, expanding the power of FN, EU and the like). Then, becus traveling costs becom progressivly smaller over time, foot voting will becom progressivly less costly. Yay, something to look forward to! When i talk with people living in the US, i often suggest to them that they simply MOVE out of the US. That country is beyond repair (its voting system is locked in a two party system, see various films by CCPGrey), and only a revolution can fix it. 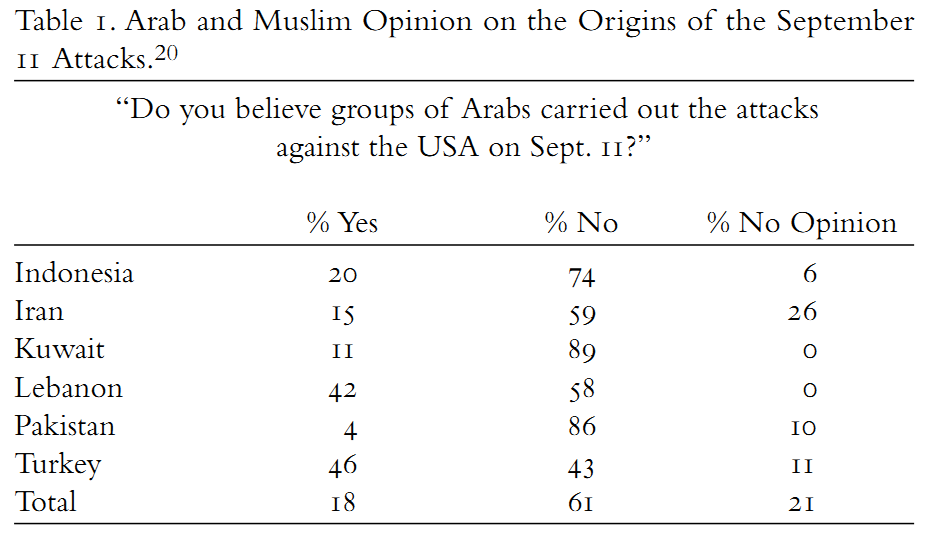 other Muslim countries is largely hostile to the United States. Some an-

alysts attribute this result to speciﬁc U.S. policies, such as support for Is-

value systems (e.g., Huntington #$$)). Either or both of these explana-

tions may be valid. But it is also important to consider the possible con-

As the data in Table # show, a &””& Gallup Survey of public opinion

in Arab and Muslim nations found large majorities denying that the

September ## attacks were carried out by “groups of Arabs. ” For exam-

ple, )$ percent of Kuwaitis, ‘! percent of Indonesians, and )% percent

of Pakistanis were apparently ignorant of this basic fact. A &””& survey

conducted by the Egyptian newspaper Al Ahram (&””&) found that *$

percent of Egyptian respondents blamed the September ## attacks on

“Israeli intelligence/the Mossad, ” while only #$ percent said that “Al-

Qa’eda or other Islamic militants” were responsible.21 Both the Gallup

War, so the responses are not the products of anti-Americanism gener-

ated by that conﬂict.

Recent paper about democracy and self-assessment/Dunning-Kruger