There is a famous paper arguing the case for libertarian paternalism by using organ donation consent rates.

The main result is this: 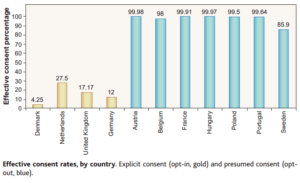 So having opt-out drastically increases consent rates compared with opt-in. These countries have various other differences between them, but the effect size is huge. 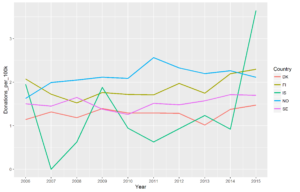 The line varies a lot for Iceland because the population is fairly small (about 300k). We see that the donation dates for Denmark and Sweden are quite comparable despite the huge difference in organ consent rates. So, apparently the bottom line did not change much despite the difference in consent rates. Since people still die on waiting lists (Danish data), there must be some other limiting factor.