Because of clarity, I feel that I should write this review in standard English. (How boring!) The book can be downloaded here: http://www.spellingsociety.org/journals/books/books.php or from my mirror (in one file) here: New Spelling book

First, the book contains an unusual high number of mistakes. From their style, it seems that they are the result not of OCR software, but of the human typer writing it wrongly. Since the book is from the 1940s, it was not written on a computer (well, it is technically possible but unlikely). These errors should be fixed as they can sometimes throw the reader off. This is especially important because this is the kind of material where the spelling is important. (For an example see the two tables from the book, reproduced below).

Second, when the authors present the reformed/nonstandard/proposed new spelling of a word, they often do not write the old spelling which sometimes makes it very hard to guess which word they are referring to. This is pretty annoying.

Third, the book lacks phonetic symbolism making it somewhat harder to know which sounds the authors are referring to, especially given the second problem above. The book contains two summaries of the proposal. I will try to put them in phonetic symbols and with the standard spelling of the respelled words. Here they are first in unaltered form: 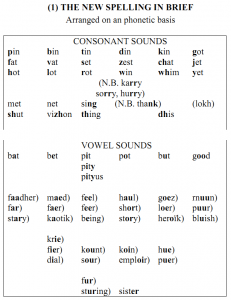 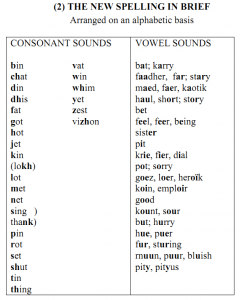 And here is my table:

Table 3 – New Spelling proposal (with extra examples by me)

Some of the proposed changes are strange, perhaps owing to the time gap between when this book was written and English (England-English) pronunciation today. I don’t agree that there is a distinction between the vowel in “short” and in “haul”, and OED agrees with me. Supposing that there is no important difference here, which spelling should be used? I think that it is best to settle on one of the proposed spelling, and simply choose the one that is used the most. From their data on p. 57, it seems one has to choose between -OR-, -AU-, -AW-. Each of them has problems but I think -OR- is by far the most commonest, both in terms of words with it and in terms of words with it used. The very common word “or” has it. Choosing either of the other proposals results in a respelling of that very common word, unless we want to keep its spelling inconsistent with the rest of the system (more on this later). Still, choosing -OR- results in lots of homographs “ore”→”or”, “awe”→”or” (results in things like “stand in or”). Perhaps context will clear it up, I suspect so, but it will be odd, very odd to begin with.

Then there is the deal with -OO- and -UU- and -U-. Some of the simplifications that are made in Cut Spelling cannot be made with this proposed, e.g. “should”→”shud”, “could”→”cud/kud”, “true”→”tru” “would”→”wud”. I’m not so sure it is a good idea to go for this maximalistic phonetic direction when there are some useful and already in use reformed spellings that we would have to discard. Perhaps it is just better to make -U- ambiguous between /ʊ/ and /ʌ/. This gives shorter spellings although less phonetic. Although this also results in things like “book”→”buk”. Perhaps in the future, after a such reform, one could introduce a diacritical sign to distinguish them if they are a problem. We need not go after a perfect system to begin with.

The proposed changes result in three homographs for some very commonly used words. This result seems particularly disturbing when reading and writing text in New Spelling. One gets things like “Dhae see dhe pursons oever dhaer and thaer animals”. I.e., New Spelling results in the same homograph with “there” and “their” as does Cut Spelling, and with “they” coming close as well. Perhaps it is best to adopt a word-sign/logograph for such words? Or just a strange spelling to avoid confusing homographs. Phonetics does not automatically weigh more than other trouble with a language. It is important to be pragmatic when reforming a language. The authors does in fact discuss adopting word-signs/logographs, see page 101 in the appendix.

The authors propose to distinguish in the spelling between these two very common sounds. They choose the least economic decision, i.e. to represent /ð/ with -DH- a completely new digraph. This results, ofc, in a staggering number of changes and especially to very common (the commonest?) word in english: “the”. This gives a very strong reason not to change anything here, or at least choose a more economic solution. The authors note when they note that this is the linguistically most optimal solution (page 29), but it is so staggering uneconomic that it has to be chosen as the last alternative. There are two other options worth considering: 1) Keep the current system. Yes, the spelling -TH- will be ambiguous. But is this really a problem? I seldom if ever come across someone who has chosen the wrong sound here. 2) Adopt the reverse change, i.e., use -DH- for /θ/, and keep -TH- for /ð/. This does not make much sense linguistically (especially not inre. to IPA), but it very economical and still results in a very phonetic system. In light of the above, I think it is best to keep the current system.

-S and -Z in plurals

The authors propose to use add different letters to words in their inflexion so that they fit with the distinction between /s/ and /z/. This seems to me to be completely unnecessary. I rather keep the current -S system no matter if the sound is /s/ or /z/. The preceding consonant will indicate whether the sound is voiced or not anyway.

There is much interesting material to be found in this reform proposal and that, and along with its useful theoretical remarks, and its short length, makes it a must read for any language reformer. It is especially useful to compare it with the Cut Spelling proposal.

A modal fallacy in linguistics

Some Wikipedia links and remarks to them