Since hearing about the five factor model (FFM), i have had an interest in personality psychology. I’m very happy that someone has invented a proper test so that we can finally stop hearing about pseudoscientific tests such as those based on psychoanalytic rubbish, most commonly the Myers-Briggs Type Indicator tests.

I was re-reading the Wikipedia page about the FFM and noticed an interesting paragraf:

Cross-cultural research has shown some patterns of gender differences on responses to the Big Five Inventory. For example, women consistently report higher Neuroticism and Agreeableness, and men often report higher extraversion and conscientiousness. Gender differences in personality traits are largest in prosperous, healthy, and egalitarian cultures in which women have more opportunities that are equal to those of men. Both men and women tend to grow more extraverted and conscientious and less neurotic and agreeable as cultures grow more prosperous and egalitarian, but the effect is stronger for men.[53][54]

Abstract of the first paper:

Secondary analyses of Revised NEO Personality Inventory data from 26 cultures (N = 23,031) suggest
that gender differences are small relative to individual variation within genders; differences are replicated
across cultures for both college-age and adult samples, and differences are broadly consistent with gender
stereotypes: Women reported themselves to be higher in Neuroticism, Agreeableness, Warmth, and
Openness to Feelings, whereas men were higher in Assertiveness and Openness to Ideas. Contrary to
predictions from evolutionary theory, the magnitude of gender differences varied across cultures.
Contrary to predictions from the social role model, gender differences were most pronounced in
European and American cultures in which traditional sex roles are minimized. Possible explanations for
this surprising finding are discussed, including the attribution of masculine and feminine behaviors to
roles rather than traits in traditional cultures.

Table with results from the paper: 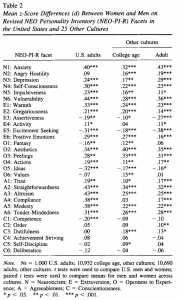 Interestingly, the data fit with what was mentioned about the job market in the norwegian docu series Hjernevask (mentioned in part 1). In that, in the more egalitarian countries, there sex difference in job choice is more not less salient. Quoting from the paper:

Cultural Differences in Gender Differentiation
Of particular interest in the present study was the puzzling
finding that self-reported gender differences are more pronounced
in Western, individualistic countries. These countries tend to have
more progressive sex role ideologies, endorsing such items as “A
women should have exactly the same freedom of action as a man”
and “Swearing by a woman is no more objectionable than swear-
ing by a man” (Williams & Best, 1990, p. 89). The social role
model would have hypothesized that gender differences would be
attenuated in progressive countries, when in fact they are magni-
fied. Evolutionary theory also appears to be unable to account for
this pattern; evolved species-wide characteristics ought to be uni-
form across cultures.
Analyses of cultural variation in gender differences showed that
differentiation is both reliable and general. College-age men and
women from each culture show the same magnitude of gender
differences as do their adult counterparts, and cultures that show
large differences on one variable tend to show large differences on
others.

Abstract of the second paper:

Previous research suggested that sex differences in personality traits are larger in prosperous, healthy, and
egalitarian cultures in which women have more opportunities equal with those of men. In this article, the
authors report cross-cultural findings in which this unintuitive result was replicated across samples from
55 nations (N  17,637). On responses to the Big Five Inventory, women reported higher levels of
neuroticism, extraversion, agreeableness, and conscientiousness than did men across most nations. These
findings converge with previous studies in which different Big Five measures and more limited samples
of nations were used. Overall, higher levels of human development—including long and healthy life,
equal access to knowledge and education, and economic wealth—were the main nation-level predictors
of larger sex differences in personality. Changes in men’s personality traits appeared to be the primary
cause of sex difference variation across cultures. It is proposed that heightened levels of sexual
dimorphism result from personality traits of men and women being less constrained and more able to
naturally diverge in developed nations. In less fortunate social and economic conditions, innate person-
ality differences between men and women may be attenuated.

The most interesting data from the paper is summarized in this picture: 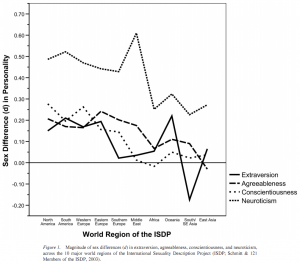 One thing bugs me about both papers, and that is the lack of focus on differences between populations/cultures that are due to genetics of those living there. Human populations are not identical. We know that there are genetic intelligence differences, perhaps there are also genetic personality differences? Is there any data on american whites vs. blacks?