Venice seems to be tired of Italy. It’s a bad economic trade off for them. They want to return to their former glory. Good! We need more power decentralization.

There was a vote:

Last week, in a move overshadowed by the international outcry over Russia’s annexation of Crimea, Plebiscito.eu, an organization representing a coalition of Venetian nationalist groups, held an unofficial referendum on breaking with Rome. Voters were first asked the main question—”Do you want Veneto to become an independent and sovereign federal republic?”—followed by three sub-questions on membership in the European Union, NATO, and the eurozone. The region’s 3.7 million eligible voters used a unique digital ID number to cast ballots online, and organizers estimate that more than 2 million voters ultimately participated in the poll.

On Friday night, people waving red-and-gold flags emblazoned with the Lion of St. Mark filled the square of Treviso, a city in the Veneto region, as the referendum’s organizers announced the results: 2,102,969 votes in favor of independence—a whopping 89 percent of all ballots cast—to 257,266 votes against. Venetians also said yes to joining NATO, the EU, and the eurozone. The overwhelming victory surprised even ardent supporters of the initiative, as most polls before the referendum estimated only about 65 percent of the region’s voters supported independence.

Someone in the comments makes the following argument:

I don’t understand why it’s so surprising that 89% of respondents in an online, unofficial poll organized by Venetian nationalist groups voted that way. As a proportion of all eligible voters, that comes out to 55-60%, much closer to what you’d expect from neutral sampling.
Self-selection bias is a huge problem with online polling, and I expect that given the methodology of the referendum, that would explain a large part of the discrepancy between the predicted and observed outcomes.

You are assuming that the entire set of nonvoting citizens would be against it. While there is likely some self-selection, it is NOT likely to be 100%.

Even given a very strong self-selection effect such that nonvoters are 70% against, the outcome is 67.7% “yes”.

I did the math, and it is here: https://docs.google.com/spreadsheet/ccc?key=0AoYWmgpqFzdsdDZUSWhOOEctRnFhakVLUjFsbFpWUHc#gid=0

Here’s the takeaway. Venice wants to be independent and it is not a narrow decision, even assuming implausible self-selection. 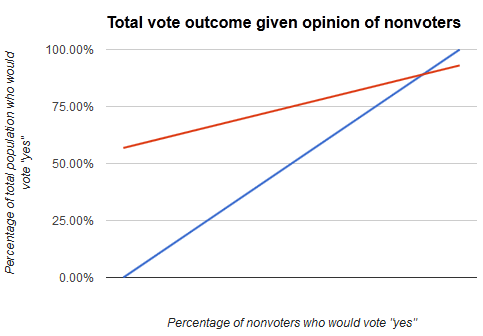