I had seen references to this book in a number of places which got me curious. I am somewhat hesitant to read older books since I know much of what they discuss is dated and has been superseded by newer science. Sometimes, however, science (or the science culture) has gone wrong so one may actually learn more reading an older book than a newer one. Since fewer people read older books, one can sometimes find relevant but forgotten facts in them. Lastly, they can provide much needed historical information about the development of thinking about some idea or of some field. All of these remarks are arguably relevant to the race/population genetics controversy.

Still, I did not read the book immediately altho I had a PDF of it. I ended up starting to read it more or less at random due to a short talk I had with John Fuerst about it (we are writing together on racial admixture, intelligence and socioeconomic outcomes in the Americas and also wrote a paper on immigrant performance in Denmark).

So, the book really is dated. It spends hundreds of pages on arcane fysical anthropology which requires one to master human anatomy. Most readers don’t master this discipline, so these parts of the book are virtually un-understandable. However, they do provide one with the distinct impression of how one did fysical anthropology in old times. Lots of observations of cranium, other bones, noses, eyes+lids, teeth, lips, buttocks, etc., and then try to find clusters in these data manually. No wonder they did not reach that high agreement. The data are too scarce to find clusters and humans not sufficiently good at cluster analysis at the intuitive level. Still, they did notice some patterns that are surely correct, such as the division between various African populations, Ainu vs. Japanese, that Europeans are Asians are closer related, that Afghans etc. belong to the European supercluster etc. Clearly, these pre-genetic ideas were not all totally wrong headed. Here’s the table of Races+Subraces from the end of the book. They seem reasonably in line with modern evidence. 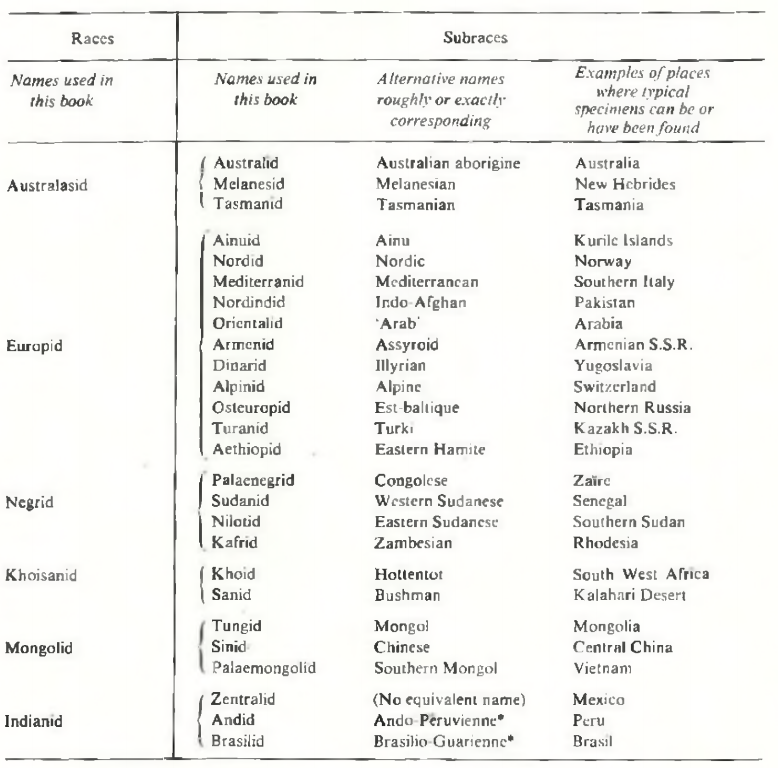 The story of 7 ‘kinds’ of mosquitoes.

[Dobzhansky’s definition = ‘Species in sexual cross-fertilizing organisms can be defined as groups of populations which are reproductively isolated to the extent that the exchange of genes between them is absent or so slow that the genetic differences are not diminished or swamped.’]

Strict application of Dobzhansky’s definition results in certain very similar animals being assigned to different species. The malarial mosquitoes and their relatives provide a remarkable example of this. The facts are not only extreme­ly interesting from the purely scientific point of view, but also of great practical importance in the maintenance of public health in malarious districts. It was discovered in 1920 that one kind of the genus Anopheles, called elutus, could be distinguished from the well-known malarial mosquito, A. maculipennis, by certain minute differences in the adult, and by the fact that its its eggs looked different; but for our detailed knowledge of this subject we are mainly indebted to one Falleroni, a retired inspector of public health in Italy, who began in 1924 to breed Anopheles mosquitoes as a hobby. He noticed that several different kinds of eggs could be distinguished, that the same female always laid eggs having the same appearance, and that adult females derived from those eggs produced eggs of the same type. He realized that although the adults all appeared similar, there were in fact several different kinds, which he could recognize by the markings on their eggs. Falleroni named several different kinds after his friends, and the names he gave are the accepted ones today in scientific nomenclature.

It was not until 1931 that the matter came to the attention of L. W. Hackett, who, with A. Missiroli, did more than anyone else to unravel the details of this curious story.(449,447.448] The facts are these. There are in Europe six different kinds of Anopheles that cannot be distinguished with certainty from one another in the adult state, however carefully they are examined under the microscope by experts; a seventh kind, elutus, can be distinguished by minor differences if its age is known. The larvae of two of the kinds can be distinguished from one another by minute differences (in the type of palmate hair on the second segment, taken in conjunction with the number of branches of hair no. 2 on the fourth and fifth segments). Other supposed differences between the kinds, apart from those in the eggs, have been shown to be unreal.

In nature the seven kinds are not known to interbreed, and it is therefore necessary, under Dobzhansky’s definition, to regard them all as separate species.

The mates of six of the seven species have the habit of ‘swarming’ when ready to copulate. They join in groups of many individuals, humming, high in the air; suddenly the swarm bursts asunder and rejoins. The females recognize the swarms of males of their own species, and are attracted towards them. Each female dashes in, seizes a male, and flies off, copulating.

With the exceptions mentioned, the only visible differences between the species occur at the egg-stage. The eggs of six of the seven species are shown in Fig. 8 (p. 76). 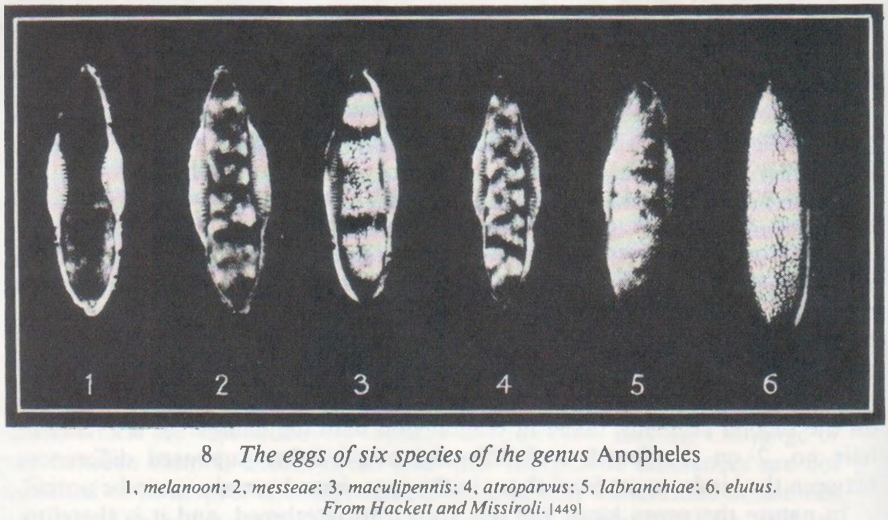 It will be noticed that each egg is roughly sausage-shaped, with an air-filled float at each side, which supports it in the water in which it is laid. The eggs of the different species are seen to differ in the length and position of the floats. The surface of the rest of the egg is covered all over with microscopic finger-shaped papillae, standing up like the pile of a carpet. It is these papillae that are responsible for the distinctive patterns seen on the eggs of the different species. Where the papillae are long and their tips rough, light is reflected to give a whitish appearance; where they are short and smooth, light passes through to reveal the underlying surface of the egg, which is black. The biological significance of these apparently trivial differences is unknown.

From the point of view of the ethnic problem the most interesting fact is this. Although the visible differences between the species are trivial and confined or almost confined to the egg-stage, it is evident that the nervous and sensory systems are different, for each species has its own habits. The males of one species (atroparvus) do not swarm. It has already been mentioned that the females recognize the males of their own species. Some of the species lay their eggs in fresh water, others in brackish. The females of some species suck the blood of cattle, and are harmless to man; those of other species suck the blood of man, and in injecting their saliva transmit malaria to him.

Examples could be quoted of other species that are distinguishable from one another by morphological differences no greater than those that separate the species of Anopheles; but the races of a single species—indeed, the subraces of a single race—are often distinguished from one another, in their typical forms, by obvious differences, affecting many parts of the body. It is not the case that species are necessarily very distinct, and races very similar. [p. 74ff]

Some very strange examples of abnormalities of this sort have been recorded by reputable authorities. Buffon quotes two examples of an ‘amour violent’ between a dog and a sow. In one case the dog was a large spaniel on the property of the Comte de Feuillee, in Burgundy. Many persons witnessed ‘the mutual ardour of these two animals; the dog even made prodigious and oft-repeated efforts to copulate with the sow, but the unsuitability of their reproductive organs prevented their union.’ Another example, still more remarkable, occurred on Buffon’s own property. A miller kept a mare and a bull in the same stable. These two animals developed such a passion for one another that on all occasions when the mare was on heat, over a period of several years, the bull copulated with her three or four times a day, whenever he was free to do so. The act was witnessed by all the inhabitants of the place. [p. 92]

There is, naturally enough, a correlation between the development of the axillary organ and the smelliness of the secretion of this gland (and probably this applies also to the a glands of the genito-anal region). Briefly, the Europids and Negrids are smelly, the Mongolids scarcely or not at all. so far as the axillary secretion is concerned. Adachi. who has devoted more study to this subject than anyone else, has summed up his findings in a single, short sentence: ‘The Mongolids are essentially an odourless or very slightly smelly race with dry ear-wax.’(5] Since most of the Japanese are free or almost free from axillary smell, they are very sensitive to its presence, of which they seem to have a horror. About 10% of Japanese have smelly axillae. This is attributed to remote Ainuid ancestry, since the Ainu are invariably smelly, like most other Europids, and a tendency to smelliness is known to be inherited among the Japanese. 151 The existence of the odour is regarded among Japanese as a disease, osmidrosis axillae which warrants (or used to warrant) exemption from military service. Certain doctors specialize in its treatment, and sufferers are accustomed to enter hospital. [p. 173]

Japan always take these things to a new level.

Measurements of adult stature, made on several thousand pairs of persons, show a rather close correspondence with these figures, namely, 0 507, 0-322, 0-543, and 0-287 respectively.(172) It will be noticed that the correlations are all somewhat higher than one would expect; that is to say, the members of each pair are, on average, rather more nearly of the same height than the simple theory would suggest. This is attributed in the main to the tendency towards assortative mating, the reality of which had already been recognized by Karl Pearson and Miss Lee in their paper published in 1903. [p. 462]

What has been said on p. 496 may now be rewritten in the form of a short definition of intelligence, in the straightforward, everyday sense of that word. It is the ability to perceive, comprehend, and reason, combined with the capacity to choose worth-while subjects for study, eagerness to acquire, use, transmit, and (if possible) add to knowledge and understanding, and the faculty for sustained effort towards these ends (cf. p. 438). One might say briefly that a person is intelligent in so far as his cognitive ability and personality tend towards productiveness through mental activity. [p. 495ff]

And now surely at the end of the book, the evil master-racist privileged white male John Baker tells us what to do with the information we just learned in the book:

Here, on reaching the end of the book, 1 must repeat some words that I wrote years ago when drafting the Introduction (p. 6), for there is nothing in the whole work that would tend to contradict or weaken them:
Every ethnic taxon of man includes many persons capable of living responsible and useful lives in the communities to which they belong, while even in those taxa that are best known for their contributions to the world’s store of intellectual wealth, there are many so mentally deficient that they would be inadequate members of any society. It follows that no one can claim superiority simply because he or she belongs to a particular ethnic taxon. [p. 534]

So, clearly according to our anti-racist heroes, Baker tells us to revel in our (sorry Jayman if you are reading!) European master ancestry, right?

Metrics for quantifying genetic cardinality of a trait

Unfinished paper: An evolutionary theory of the origin of same-sex sexual acts based on social bonding