Nuclear energy often gets bad press. However, journalists are mostly very leftist, scientifically ill-educated women, so perhaps they are not quite the right demographic to tell us about this issue. So far I have not found any published studies about the relationship between attitudes towards nuclear energy and general intelligence, however there is good reason to believe it is positive. The EU is to nice to survey the opinions of EU citizens on nuclear energy every few years, and they include measurement of various variables, but not general intelligence or general science knowledge.

Three surveys of European attitudes towards nuclear power and correlates 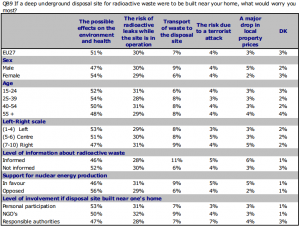 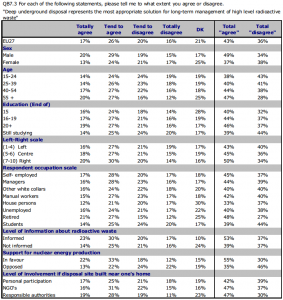 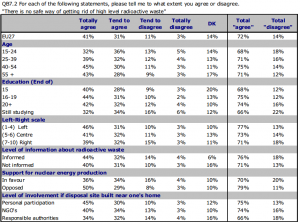 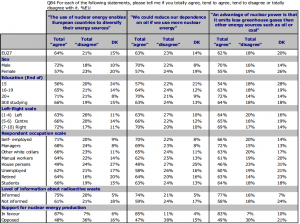 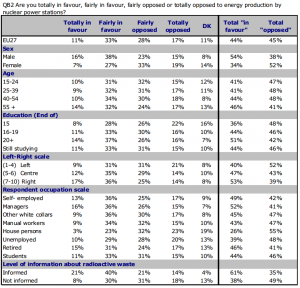 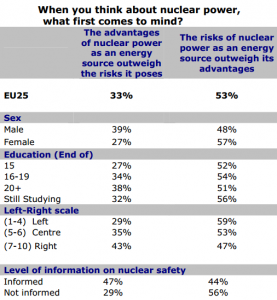 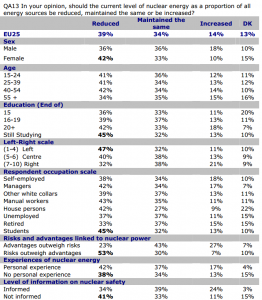 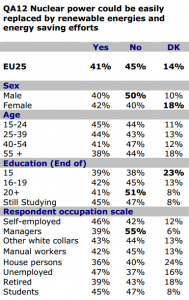 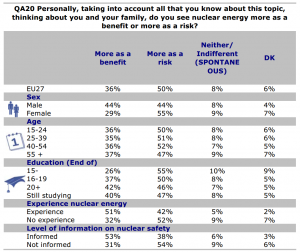 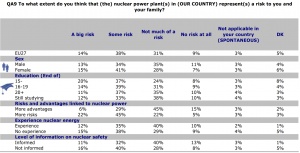 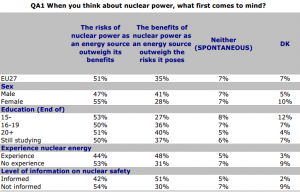 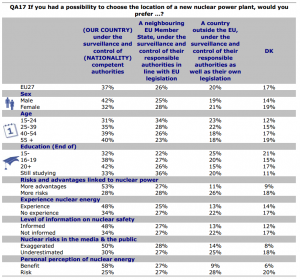 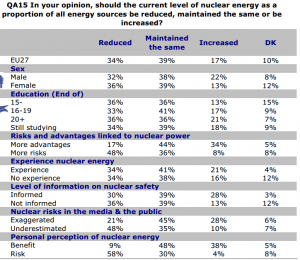 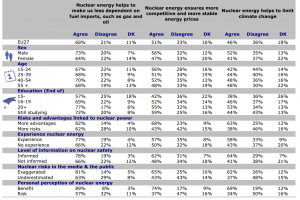 (4) might seem inconsistent with (1-3), but it is not. Usually the questions have three broad categories: positive, negative, don’t know. When the education level increases, negative stays about the same (sometimes increases, sometimes decreases), while don’t know always decreases and positive nearly always increases. Thus, the simplest explanation for this is that higher education move people from the don’t know category to the positive category, while it has no clear effect those who are negative about nuclear power.

Survey in the United Kingdom

Most of the questions were too specific to be of use, however one was useful, is post-Fukushima and still found the usual results:

What do experts think?

In a recent study, a random sample of scientists was asked about nuclear power (62). Of those polled, 53 percent said development should proceed rapidly, 36 percent said development should proceed slowly, and 10 percent would halt development or dismantle plants. When a second group of scientists with particular expertise in energy issues was given the same choices, 70 percent favored proceeding rapidly and 25 percent favored proceeding slowly with the technology. This second sample included approximately equal numbers of scientists from 71 disciplines, ranging from air pollution to energy policy to thermodynamics. About 10 percent of those polled in this group worked in disciplines directly related to nuclear energy, so that the results might be somewhat biased. Support among both groups of scientists was found to result from concern about the energy crisis and the belief that nuclear power can make a major contribution to national energy needs over the next 20 years. Like scientists, a majority of engineers continued to support nuclear power after the accident at Three Mile Island (69).

Of course, not all opinion leaders are in favor of the current U.S. program of nuclear development. Leaders of the environmental movement have played a major role in the debate about reactor safety and prominent scientists are found on both sides of the debate. A few critics of nuclear power have come from the NRC and the nuclear industry, including three nuclear engineers who left General Electric in order to demonstrate their concerns about safety in 1976. However, the majority of those with the greatest expertise in nuclear energy support its further development.

Analysis of public opinion polls indicates that people’s acceptance or rejection of nuclear power is more influenced by their view of reactor safety than by any other issue (57). As discussed above, accidents and events at operating plants have greatly increased public concern about the possibility of a catastrophic accident. Partially in response to that concern, technical experts have conducted a number of studies of the likelihood and consequences of such an accident. However, rather than reassuring the public about nuclear safety, these studies appear to have had the opposite effect. By painting a picture of the possible consequences of an accident, the studies have contributed to people’s view of the technology as exceptionally risky, and the debate within the scientific community about the study methodologies and findings has increased public uncertainty.

And recently, much publicity was given to a study showing the discrepancy between public opinion and scientific opinion on various topics, and it included nuclear power: 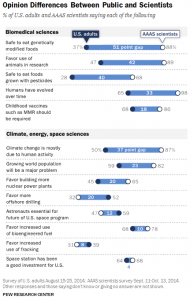 A 20% percent point different is no small matter and is similar to the older studies described above.

The OKCupid dataset contains only one question related to nuclear power among the first 2400 questions or so (those in the dataset). The question is the 2216th most commonly answered question, that is, not very commonly answered at all. Since people who answer >2000 questions on a dating site are a very self-selected group, there is likely to be some heavy range restriction. 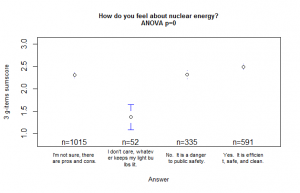 Aside from the “I don’t know”-category, the differences are quite small:

However, samples are quite large. The 99% confidence interval is -0.323 to -0.037, which is getting close to 0, so we need more data to be quite certain, but it’s unlikely to have happened by chance. How large is the difference in some more useful unit? It’s .18 points on a 3-point scale (3 IQ-type questions). The overall SD in the total dataset for this 3-point scale is .96 (mean=2.12, N=28k). However, for this question, it is only .88 due to range restriction (mean=2.34, N=1993). In other words, in SD units it is .18/.88=0.20, which is 3 IQ points, not correcting for anything. Perhaps after corrections this would be something like 5 IQ points between pro and con-nuclear power people in this dataset.

I’d like more data with measures of scientific knowledge, or probability reasoning or some such and various energy policy opinions including nuclear. Of course, there should also be general intelligence data.