I found this one a long time ago and tweeted it, but apparently forgot to blog it.

Abstract
Background Inter-country adoptees run risks of developmental and health-related problems. Cognitive ability is one important indicator of adoptees’ development, both as an outcome measure itself and as a potential mediator between early adversities and ill-health. The aim of this study was to analyse relations between proxies for adoption-related circumstances and cognitive development.
Method Results from global and verbal scores of cognitive tests at military conscription (mandatory for all Swedish men during these years) were compared between three groups (born 1968–1976): 746 adoptees born in South Korea, 1548 adoptees born in other non-Western countries and 330 986 non-adopted comparisons in the same birth cohort. Information about age at adoption and parental education was collected from Swedish national registers.
Results South Korean adoptees had higher global and verbal test scores compared to adoptees from other non-European donor countries. Adoptees adopted after age 4 years had lower test scores if they were not of Korean ethnicity, while age did not influence test scores in South Koreans or those adopted from other non-European countries before the age of 4 years. Parental education had minor effects on the test performance of the adoptees – statistically significant only for non-Korean adoptees’ verbal test scores – but was prominently influential for non-adoptees.
Conclusions Negative pre-adoption circumstances may have persistent influences on cognitive development. The prognosis from a cognitive perspective may still be good regardless of age at adoption if the quality of care before adoption has been ‘good enough’ and the adoption selection mechanisms do not reflect an overrepresentation of risk factors – both requirements probably fulfilled in South Korea.

In total, 2294 inter-country adoptees were born outside the Western countries (Europe, North America and Australia) and adopted before age 10 years. Of these, 746 were born in South Korea [Korean adoptee (KA) group]. The remaining 1548 individuals were born in other countries, Non-Korean adoptee (NKA) group. India was the most common country of origin, followed by Thailand, Chile, Ethiopia, Colombia and Sri Lanka. These were the only donor countries for which the number of adoptees included in this study exceeded 100. The non-adopted population (NAP) group consisted of non-adopted individuals born in Sweden (n=330 896). 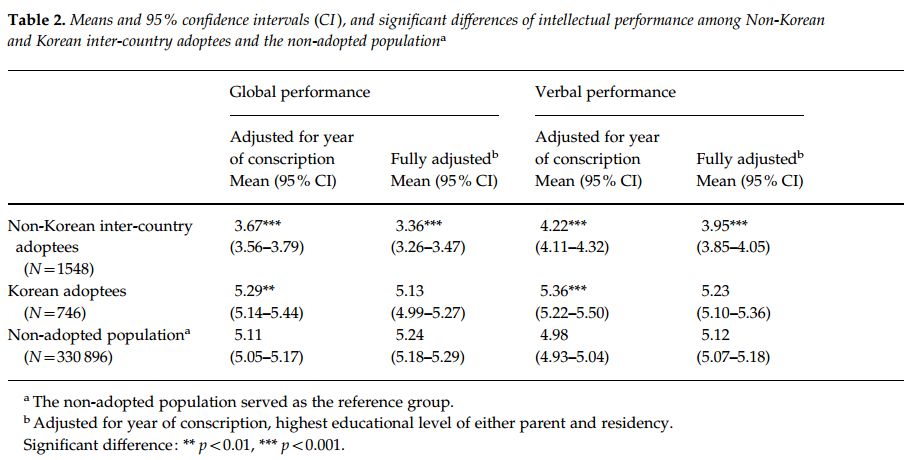 We see that Koreans adoptees do better than Swedes, even on the verbal test. The superiority stops being p<alpha when they control for various things. Notice that the disadvantage for non-Koreans becomes larger after control (their scores decrease and the Swedes’ scores increase).

Age at adoption matters, but apparently only for non-Koreans

This is in line with environmental cumulative disadvantage for non-Koreans. Alternatively, it is due to selection bias in that the less bright children (in the origin countries) are adopted later.

Perhaps the Koreans were placed with the better parents and this made them smarter?

Maybe, but the data shows that it isn’t important, even for transracial adoptives.

Notice the clear relationship between child IQ and parental education for the non-adopted population. Then notice the lack of a clear pattern among the adoptives. There may be a slight upward trend (for Koreans), but it is weak (only .22 between lowest and highest education for Koreans, giving a d≈.10) and not found for non-Koreans (middle education-level had highest scores).

Still, one could claim that in Korean, smarter/normal children are given up for adoption, while in non-Korea non-Western Europe, this isn’t the case or even the opposite is the case. This study cannot address this possibility.

This study is much larger than other studies and also has a comparison group. The main problem with it is that it does not report data for more countries of origin. Only the (superior) Koreans are singled out.