In reply to: Scott Alexander’s Learning To Love Scientific Consensus. Actually, I have planned (in my mind) a somewhat longer post on my take on the ‘correct contrarian cluster’, or how to make up your mind of what to believe on controversial topics. But I certainly don’t have time to write that now, so instead you get this post.

Regarding historical examples, this list collected by The Alternative Hypothesis is much better than the various top 10 lists you can find. Maybe somewhat with more time and knowledge of science history than me should go over it.

In so far as their examples hold up, they make a smarter argument. Instead of doing only “consensus was X, and X was wrong” arguments, which can always be attacked on the grounds that “X wasn’t really wrong”, they do arguments of “consensus was X, then consensus was Y, and now it’s X or Z”. For this argument, one does not need to agree on the truth of the matter, only the expert consensus status. If consensus changed, then no matter what the truth really is, consensus was not always in agreement with it.

A more sophisticated version of the consensus-is-right position is to argue that the consensus may not be the truth, but it follows the evidence base as a whole (slowly and wiggly). Sometimes the evidence base may point towards a falsehood for extended periods of time. Not necessarily due to any particular political or religious bias, but just due to the difficulty of some scientific questions, lack of good quality relevant data, stochastic processes among humans etc. This view is harder to attack, but also harder to positively argue for because it is really hard to show track of what the total evidence base pointed towards in, say, 1955 re., say, plate tectonics theory. Finding out requires doing a lot of reading on old material and painstakingly avoiding anachronisms. This is far beyond what most people are willing and capable of doing, and generally only a few science historians take this route (bless them!).

It is of course often hard to know what the expert consensus is. Aside from controversial topics (evolution, global warming, IQ, GMO etc., see below), scientists don’t routinely conduct large surveys of expert beliefs (they should!). So instead people rely on their general impressions of what experts believe. If they don’t read the scientific literature, what other source to rely on than the media? This gives rise a likely* media bias effect as the media tends to present experts that believe things media people believe in, and not necessarily what the experts generally believe in. So, lots of space to, say, “10,000 hours of training” researchers and lots of space to “the next early intervention will fix inequality, promise!” researchers. And then people get the impression that the consensus is something else than it really is. I wish the media would adopt public high score tables for ‘science pundits’ and give preferential treatment (attention) to those who tend to make correct predictions (an idea proposed by John Pressman here). The media and scientists should team up to make pre-registered experiments and predictions in the hostile collaboration style.

For the record, I don’t think of myself as a revolutionary scientist (or a ‘universal genius’ as a journalist recently made up). To put it in horse terms, my view is that essentially I’m betting on an winning horse early, and that this horse has a bad reputation, but that in 10 years or so, there will be widespread open acknowledgement that this is a good horse nonetheless (yes, I am talking about race and IQ). As the surveys show, experts generally do agree with me on this topic, altho I’m surely more towards the genetic side than the median. (But it does depend on who counts as an expert. Presumably most experts surveyed on this question have not studied it in depth.) Scott does not like my presentation style of these ideas because it makes it harder for nice people like Steven Pinker to work on the public image of the ideas. I understand accept this argument, but I would like to point out that when people with my views don’t speak candidly about them, the media bias effect gets stronger. Personally, I think scientific should discuss their ideas openly and frankly. In general, I think the long-term consequences of suppression of unpopular findings is a net native outcome. I think it also applies in this case, i.e. the harms of ignoring scientific findings about what works with regards to social inequality is likely to have much larger negative consequences than the alternative. Frankly, I don’t think Nazi-style totalitarian governments that target specific races/ethnicities/religions have any large chance of coming back in Western countries (as long as these are run by Europeans).

Since history repeats itself, here’s Jensen in 1969 (How much can we boost IQ and scholastic achievement?):

The question of race differences in intelligence comes up not when we deal with individuals as individuals, but when certain identifiable groups or subcultures within the society are brought into comparison with one another as groups or populations. It is only when the groups are disproportionately represented in what are commonly perceived as the most desirable and the least desirable social and occupational roles in a society that the question arises concerning average differences among groups. Since much of the current thinking behind civil rights, fair employment, and equality of educational opportunity appeals to the fact that there is a disproportionate representation of different racial groups in the various levels of the educational, occupational, and socioeconomic hierarchy, we are forced to examine all the possible reasons for this inequality among racial groups in the attainments and rewards generally valued by all groups within our society.

To what extent can such inequalities be attributed to unfairness in society’s multiple selection processes? (‘Unfair’ meaning that selection is influenced by intrinsically irrelevant criteria, such as skin color, racial or national origin, etc.) And to what extent are these inequalities attributable to really relevant selection criteria which apply equally to all individuals but at the same time select disproportionately between some racial groups because there exist, in fact, real average differences among the groups – differences in the population distributions of those characteristics which are indisputably relevant to educational and occupational performance? This is certainly one of the most important questions confronting our nation today. The answer, which can be found only through unfettered research, has enormous consequences for the welfare of all, particularly of minorities whose plight is now in the foreground of public attention. A preordained, doctrinaire stance with regard to this issue hinders the achievement of a scientific understanding of the problem. To rule out of court, so to speak, any reasonable hypotheses on purely ideological grounds is to argue that static ignorance is preferable to increasing our knowledge of reality. I strongly disagree with those who believe in searching for the truth by scientific means only under certain circumstances and eschew this course in favor of ignorance under other circumstances, or who believe that the results of inquiry on some subjects cannot be entrusted to the public but should be kept the guarded possession of a scientific elite. Such attitudes, in my opinion, represent a danger to free inquiry and, consequently, in the long run, work to the disadvantage of society’s general welfare. ‘No holds barred’ is the formula for scientific inquiry. One does not decree beforehand which phenomena cannot be studied or which questions cannot be answered.

And in 1973 (Educability and group differences):

The scientific task is to get at the facts and properly verifiable explanations. Recommendations for dealing with specific problems in educational practice, and in social action in general, are mainly a social problem. But would anyone argue that educational and social policies should ignore the actual nature of the problems with which they must deal? The real danger is ignorance, and not that further research will result eventually in one or another hypothesis becoming generally accepted by the scientific community. In the sphere of social action, any theory, true or false, can be twisted to serve bad intentions. But good intentions are impotent unless based on reality. Posing and testing alternative hypotheses are necessary stepping stones toward a knowledge of reality in the scientific sense. To liken this process to screaming ‘FIRE . . . I think’ in a crowded theatre (an analogy drawn by Scarr-Salapatek, 1971b, p. 1228) is thus quite mistaken, it seems to me. A much more subtle and complete expression of a similar attitude came to me by way of the comments of one of the several anonymous reviewers whose judgments on the draft of this book were solicited by the publishers. It summarizes so well the feelings of a good number of scientists that it deserves to be quoted at length.

* I’d like to see some more quantitative evidence as ‘general impressions’ are a low form of evidence. There was that study (n=40) of economists (Kardashian’s index) showing that those who received the most media attention has lower research output/citations, which is sorta in the right direction. Another example of this is famed scientific Neil Degrasse Tyson, who seems to have little research output. I did not check to see if there have been more of these studies, but they should be ‘fairly easy’** to conduct using Google Scholar. Maybe we should survey journalists on science topics, see which beliefs they really have, and consequently, which topics we should be attentive to bias about. See also the 2015 survey of AAAS scientists on various issues as compared with the general population. 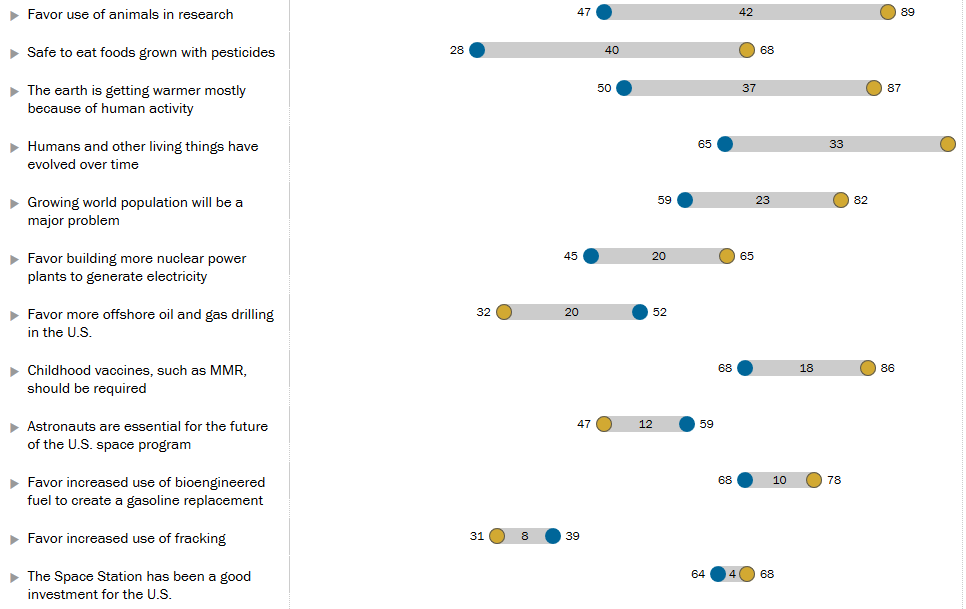 ** Nothing in science is ever as easy or fast to do as it sounds (planning fallacy). I know because I have 100 unfinished projects in my projects folder. Most of these were started on the basis of “Oh, I’ll just do this quick, easy and worthwhile study of X”. Often I do most of the data collection and analysis, but never submit it for publication. I don’t seem to learn, and recently started another 5 or so projects in a similar vein… Oh well!

The performance of African immigrants in Europe: Some Danish and Norwegian data