This is another relatively small international adoption study. 159 children were adopted in homes in the Netherlands from Sri Lanka, Korea and Colombia.

Participants are described as:

The present study examines the development and adjustment of 159 adopted children at age 7 years. The largest group, 129 adopted children, was selected from 2 studies, starting when the child was aged 5 months. In these studies a short-term early intervention was implemented in three sessions at home between 6 and 9 months in an experimental group, and results were compared with a control group. The families for this experiment were randomly recruited through Dutch adoption organizations, and not selected on (future) problems. Also, to avoid selection, the parents were not aware of the intervention when they entered the study. They were requested to participate in a study examining the development of adopted children. The results of the intervention study were reported elsewhere (Juffer, Hoksbergen, Riksen-Walraven, & Kohnstamm, 1997 ; Stams, Juffer, Van IJzendoorn, & Hoksbergen, in press). The intervention was not repeated during the following years. The original studies involved 70 mixed families, i.e., adoptive families with biological children, and 90 all-adoptive families, i.e., adoptive families without biological children. As intervention effects were found at age 7 in a small intervention group of 20 mixed families (Stams et al., in press), we decided to omit this group from the present study. The remaining sample consisted of 55 intervention and 74 control families. An additional group of 30 families, matched on the original criteria, was randomly recruited from one adoption agency at age 7, serving as a post-test-only group. The absence of intervention or testing effects on any of the outcome measures was confirmed in preliminary analyses, contrasting intervention with control groups, and control groups with the post-test-only group recruited at age 7, respectively.

The adoptive parents were Caucasian white, and in all families the mother was the primary caregiver. The families were predominantly from middle-class or upper middle-class backgrounds. The attrition rate was 8 %, that is, 11 of 140 participants from the original studies. The major reasons for declining were disinterest or health problems of family members. Four mothers had died of incurable illnesses. A series of separate Bonferroni-corrected statistical tests confirmed the absence of differential attrition in the total sample with respect to child background variables, such as age at placement, and family background variables, such as socioeconomic status or family type (with or without biological children).

The children, 73 boys and 86 girls, were adopted from Sri Lanka (N=108), South Korea (N=37), and Colombia (N=14). The infants from Sri Lanka were in the care of their biological mother until their adoption placement at a mean age of 7 weeks (SD=3). Korean and Colombian infants stayed in an institution or foster home after separation from their biological mother at birth, until their adoption placement at a mean age of 15 weeks (SD=4). In comparison with adoptions from Romania, for example (O’Connor et al., 2000 ; Rutter et al., 1998), the material conditions in the Korean and Colombian institutions were relatively favorable, as these homes received substantial support from a Dutch adoption agency. However, little is known about the quality of care, whereas one may assume that frequent changes of caretakers and nonoptimal child–caretaker ratios, often found in institutions, resulted in less favorable socioemotional conditions (O’Connor, Bredenkamp, Rutter, & the ERA Study Team, 1999). Little is known about the child-rearing conditions of the Sri Lankian infants after birth. Based on anecdotal evidence from parent reports, pre- and post-natal care for the relinquishing mother and her baby were far from optimal in Sri Lanka, and the health condition of the mother was deplorable in many cases (Juffer, 1993).

The paper is primarily about some socioemotional variables of no particular interest to me. However, they also accessed cognitive ability with the following test:

In the present study, we used the abbreviated RACIT, which consisted of the following subtests : flexibility of closure (α¯ ±84), paired associates (split-half reliability¯±77), perceptual reasoning (split-half reliability¯±73), vocabulary (α¯±74), inductive reasoning (α¯±86), ideational fluency (α¯±81). The reliability of the abbreviated RACIT was .91 (N¯163), and was estimated on the basis of the number of subtests, the reliabilities of the subtests, and the correlations between the subtests (Nunally, 1978). The raw scores were transformed to standardized intelligence scores with a mean of 100 (SD15). The standardized scores were derived from a representative sample of 1415 children between age 4 and 11, drawn from the Dutch general school population in 1982 (Bleichrodt et al., 1987).

The results of the testing at age 7 are: 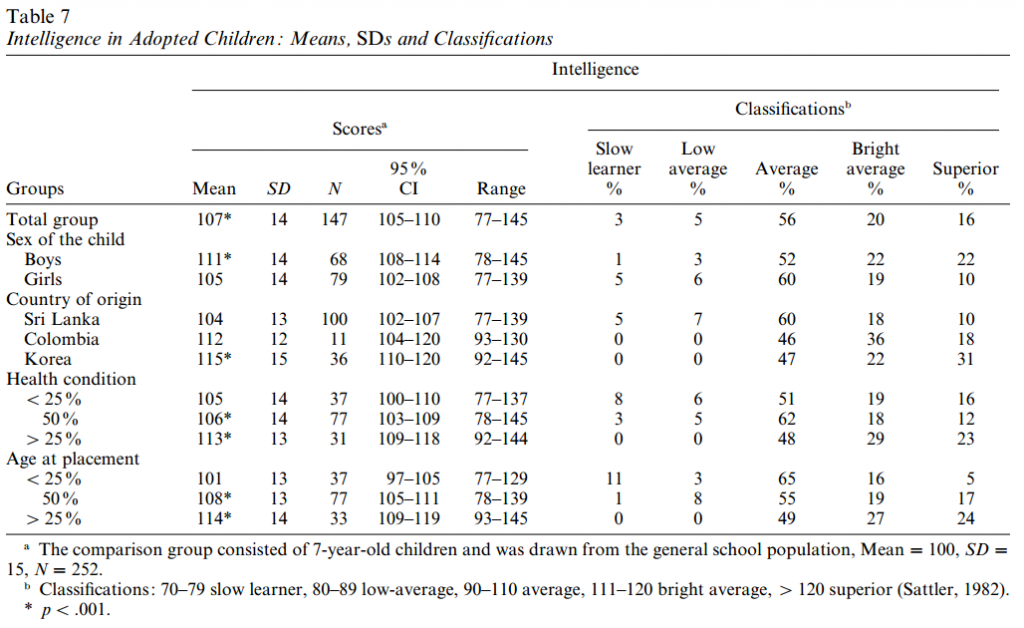 The adoptive families in adoption studies are usually somewhat above average which boosts the IQ of especially younger children. This along with the FLynn effect is probably responsible for the higher than 100 scores. But among the groups, we see Koreans on top as is usually seen in these studies.

How bad is low level lead poisoning? Probably not that bad