As Jason Malloy has mentioned, it is strange that in the race intelligence debates, people usually cite the same few studies over and over:

Shortly after writing that post, I decided that more needed to be written about transracial adoption research as a behavior genetic experiment. Arthur Jensen, Richard Lynn, and J. Philippe Rushton have all cited the Minnesota Transracial Adoption Study, as well as several IQ studies of transracially adopted Asians, in support of the hereditarian position. And Richard Nisbett has referenced several other adoption studies that suggest no racial gaps. However, I suspected there was more data for transracially adopted children than what this small cadre of scientists had already discussed (at the very least for important variables other than intelligence); research that could give us a more complete picture of what these unusual children become, and what this can tell us about the causes of ethnic differences in socially valued outcomes.

One way of finding hard to find studies is going thru articles that cite popular reviews of the topic. Sometimes, this is not possible if the reviews have thousands of citations. However, sometimes, it is. In this case, I used the review: Kim, W. J. (1995). International adoption: A case review of Korean children. Child Psychiatry and Human Development, 25(3), 141-154. Then simply look up the studies that cite it (101 results on Scholar). We are looking for studies that report country or area of origin as well as relevant criteria variables such as IQ scores, GPA, educational attainment/achievement, income, socioeconomic status/s factor, crime rates, use of public benefits and so on.

One such study is: Lindblad, F., Hjern, A., & Vinnerljung, B. (2003). Intercountry Adopted Children as Young Adults—‐A Swedish Cohort Study. American Journal of Orthopsychiatry, 73(2), 190-202. The abstract is promising:

In a national cohort study, the family and labor market situation, health problems, and education of 5,942 Swedish intercountry adoptees born between 1968 and 1975 were examined and compared with those of the general population, immigrants, and a siblings group—all age matched—in national registers from 1997 to 1999. Adoptees more often had psychiatric problems and were longtime recipients of social welfare. Level of education was on par with that of the general population but lower when adjusted for socioeconomic status.

The sample consists of:

So, by the usual standards, this is a very large study. We are interested in the region of birth results. They are in two tables: 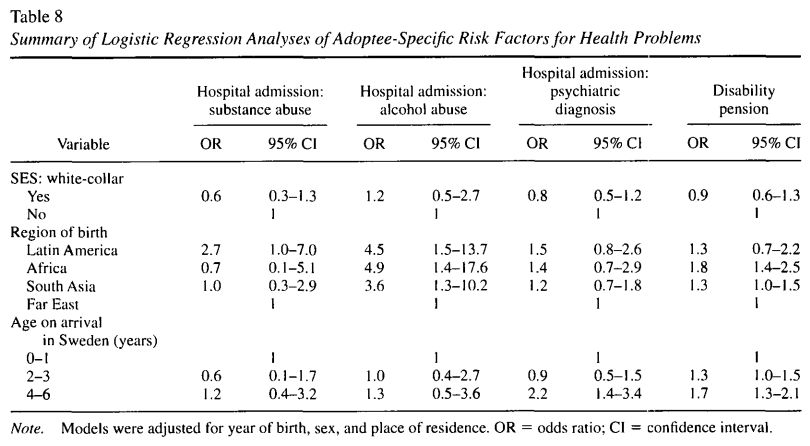 It would probably have been better if one could aggregate the results and look at the general socioeconomic factor instead. It is not possible to do so with the above results, since there are only 4 cases and 11 variables. One could calculate a score by choosing some or all of the variables. Or one could assign them factor loadings manually and then calculate scores. I calculated a unit-weighted score based on all but the first two indicators (married and living with parents since these are not socioeconomically important). Two indicators (uni degree and workforce) were reversed (by 1/OR). I also calculated the median score which is resistant to outliers (e.g. the alcohol abuse indicator). Results:

In their discussion they write:

There were considerable differences between adoptees from different geographical regions with better outcomes in many respects for children from the Far East, in this context mainly South Korea. Sim­ilar positive adjustment results concerning Asian adoptees have been presented previously. For in­ stance, an excellent prognosis concerning adjustment and identity development in Chinese adoptees in Britain was described (Bagley, 1993). A Dutch group recently presented data about academic achievement and intelligence in 7-year-old children adopted in in­ fancy (Stams, Juffer, Rispens, & Hoksbergen, 2000). The South Korean group had high IQs with 31% above a score of 120. Pre- and postnatal care before adoption seems to be particularly well organized in South Korea (Kim, 1995), which may be one important reason for the positive outcome. The differences among the geographic regions may also, however, be due to a large number of other factors such as differ­ences in nutrition, motives behind the adoption, qual­ity of care in the orphanage-foster home before the adoption, genetic dispositions, and Swedish preju­dices against “foreign-looking” people. Another ex­planation may be a larger number of younger infants in the South Korean group. However, that is not pos­sible to verify from our register data.

I have also contacted the Danish statistics office to hear if they have Danish data.

Mining data from OKCupid: using OKC’s questions as an IQ-test