This sort of thing should not be necessary. However, due to long time mentally ill online stalker Oliver D. Smith (see here), and various people who repeat his lies and distortions, writing something like this has become necessary.

At various times, my colleagues are accused of being connected to me, “well-known neo-Nazi” (as one random blog put it). So here’s a blogpost summarizing my various statements on Nazis, Hitler and Jews. 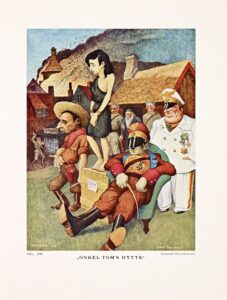 My great grandfather was a somewhat famous Danish artist (Harald Engman) who got into trouble for making fun of Nazis. He had to flee to Sweden. I have posted about it publicly:

Apparently, the anti-authoritarian spirit runs in the family longer than I knew!

My paternal great grandfather was a famous artist who made satirical anti-Nazi drawings. Eventually had to flee to Sweden to hide during the occupation.https://t.co/j21ZNhmwGv pic.twitter.com/L0ow3if8S1

He was married to a partially Jewish women (i.e. my great grandmother, paternal side). I took a genetic test to confirm this, and it shows I have partial Jewish ancestry. Thus, the critics have a rather poor taste in calling someone a Nazi, when the person is both Jewish and has family history of anti-Nazism! Curiously, Helmuth Nyborg, who is the most famous Danish IQ researcher, family was also active in the Danish resistance. Lesson: anti-authoritarians often end up battling totalitarians, whatever uniforms these come in.

I have written in support of Jewish achievement many times, both in published work and on Twitter. It’s somewhat of a big mystery why someone who is allegedly a Nazi would publish research showing Ashkenazi Jews to be smarter than Europeans for genetic reasons. I have published two studies that investigated Jews or mentioned them:

Personally I love the Jewish achievements. I was talking about Nazi/anti-Semitic psychology. @macordero

Furthermore, I have often been critical on Hitler and Nazis publicly:

Most important event that should have happened but didn't? Hitler such a disaster for Western civilization. Never give power to charismatic lunatics, and if you do, then don't give them absolute power. https://t.co/eP2ISyA5mw pic.twitter.com/ZifmdL8ozx

You don't think Hitler was a lunatic? His behavior follows typical personality cult behavior, high paranoia, totalitarianism, extreme belief in own competence despite evidence to the contrary (e.g. Hitler would overrule general's decisions).

Dude, Hitler literally invaded my country. It was a strategic, war-time move for Germany against peaceful northern neighbors (Aryans, by their ideology). Nazi war wasn't mainly a defense against Marxists, it was primarily about German expansionism, lust for empire.

I am no doctor. I haven't studied Nazi philosophy in detail, but what I've seen anyway was rubbish.

I hereby publicly denounce neonazis, old nazis, and whatever other totalitarian regimes. Now, we can put that one to rest. pic.twitter.com/PygQPmSc2v

Thus, by published record, I am obviously not very supportive of Nazism, and fairly pro-Jewish as far as HBDers go. My favorite scientist is Arthur Jensen (I created his memorial site), who was 25% Jewish (and 25% Danish). I have been critical of Kevin MacDonald-type group selection models publicly, for instance in this blogpost.
Tags: Hitler, jews, Nazis

David Stove: What is Wrong with Our Thoughts? A Neo-Positivist Credo

A note about modal collapse

Being a good intellectual