Ben van der Merwe (covered by others here, here), the social justice activist journalist, has been working for some years now to produce various hit pieces on researchers associated with the London Conference on Intelligence (which now has a Wikipedia page thanks to him). His efforts have largely succeeded in that his pieces and the various copies by other journalists resulted in shut down of our yearly conference at University College London (UCL). The impact on the actual conference proceedings were however fairly minimal because we simply moved it to another location the next year. Ben uses the usual journalist method of making things seem outlandish when actually they are quite close to mainstream or expert opinion on the topic (see Woodley et al 2018, Carl and Woodley 2019). Ben is also quite sloppy, in his recent 2019 piece described Ed Dutton as being an “English aristocrat”. On Twitter, he also said he was living in Norway, though the article says Finland (the latter is correct).

Ben is also a rather deceptive person. I have some first hand evidence of this not known to the public, so I shall post it here in case someone will be writing hit pieces on Ben. While digging around for content for his first series of hit pieces (in the Private Eye etc.), he emailed various researchers, including yours truly:

I’m a reporter with Private Eye. I wanted to enquire about a conference referenced on your website, the London Conference on Intelligence 2017. If you have time, I would like to ask you just three questions about the conference.

1. Would I be correct in thinking that the journalist Toby Young attended the 2017 conference?
2. Would it be possible for you to send me a copy of the 2017 conference programme?
3. What role, if any, do the Ulster Institute for Social Research and Mankind Quarterly have in organising and funding the London Conference on Intelligence? Does UCL have knowledge of this association?

Thank you for your time,

So, we have Ben here addressing me as Dr. Curious choice since of course I hold no PhD or other doctorate, a fact no one is trying to hide (rather I take some pleasure in this fact). So is Ben trying to flatter me, or does he genuinely think I have a doctorate? We know which one it is because Ben wrote a colleague an email around the same time:

I am a reporter with the Private Eye, conducting an investigation into the London Conference on Intelligence. I would like to ask you three short questions, if you have the time.

1. Why was Emil Kirkegaard invited to speak at ISIR 2017 in Montreal? Is it not true that his highest qualification is a Bachelors’ degree in Linguistics, and that he has shown himself to have a poor grasp of scientific ethics in his handling of the data from OKCupid?
2. What role, as a board member of the ISIR, did you play in selecting speakers for the Montreal conference?
3. How would you describe your relationship with Richard Lynn?

So we see that Ben was indeed being deceptive above. He maybe tried a different scheme a while before that, where some mysterious student wrote me:

I’m a post-graduate psychology student at UCL, with a particular interest in the intersection of genetics, culture, and intelligence. I have been reading your contributions on OpenPsych for a while, and only just found out about LCI. I wanted to ask if you had one planned for 2018, and if you have any reading material from the 2017 conference.

It features the same use of doctor, and obvious fake name (even incorrect) gave it away. I asked for ID and the person sent this photo, so I guess someone could attempt to find a photo of Ben’s hands and see if these match or not. 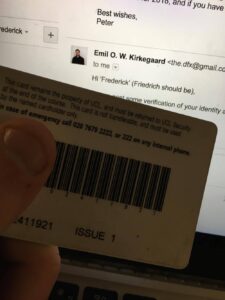 Around the same time, another journalist email of interest:

I am contacting you on behalf of The Daily Telegraph (London) concerning an article we intend to publish tomorrow on the London Conference on Intelligence hosted at UCL.

In this article we intend to allege that you are a eugenicist whose presence at a conference on a university campus is inappropriate.

We also intend to publish extracts from a blog you wrote in 2012, in which you stated:

“One can have sex with some rather young ones (say, any consenting child in puberty) without any moral problems, especially when one is young oneself.

We also intend to allege that in 2012 a picture posted on your Facebook page depicted you smiling in a photograph in which a friend performed a Nazi salute.

I would appreciate if you could respond to these allegations in full.

As a fair and responsible publisher, I would ask that you respond no later than 5pm (GMT) today so that we can incorporate your response into our article.

I think there were a few more like this one, but I don’t recall them exactly.