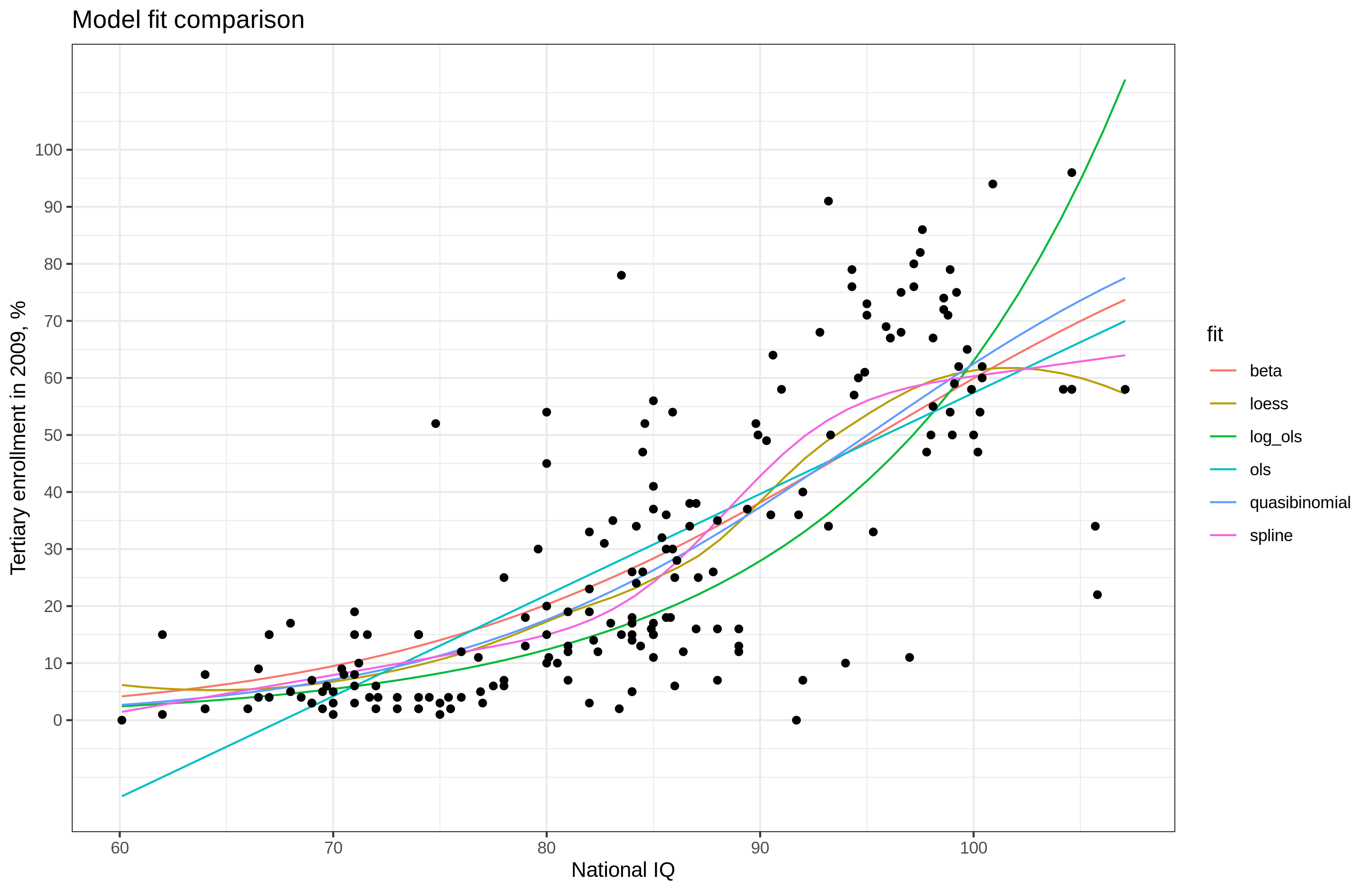 This is a question I emailed to Richard Lynn about data in regression analysis in his book Intelligence that did not make sense to me. [Lynn is busy]. I thought maybe you could answer this question since he cannot, which is why I am forwarding the email I sent him to you, because I don’t feel like rewriting the same question again.

———- Forwarded message ———
From: Anon
Date: Sat, May 9, 2020 at 4:21 AM
Subject: Question about negative fitted values in regression analysis data table in ‘Intelligence’ in the chapter ‘Educational and Cognitive Attainment’
To: Richard Lynn <lynnr540@aol.com>

The answer is simple. OLS (ordinary least squares) does not know that the outcome variable cannot go below 0%. It assumes it is a continuous variable with theoretically infinite range, and draws a best fitting line to forecast values whether or not these are considered sensible by humans (below 0 or over 100%). One will have to use a more advanced method if one wants to avoid this kind of issue. Typically here, one would use some kind of logistic-like function. If you repeat the model fit in Excel, you will find the same result for countries with very low IQs. A quick and dirty solution is to simply set negative predicted values to 0.
Something like one of these:
http://greenlab.cirad.fr/GLUVED/html/P1_Prelim/Math/Math_dynsys_002.html
-Emil

‘One will have to use a more advanced method if one wants to avoid this kind of issue.’ Could you explain to me or else direct me to a source explaining a specific method for avoiding negative results? I would prefer to see what the actual average value of percentages for very low IQ countries is in regression analysis than the artificially constructed negative numbers because I am trying to present the data to people as evidence for the importance of IQ and intelligence for differences in life outcomes between people, and when I show them the data as written with the negative fitted values it gives them an excuse to dismiss the data as gibberish.

I had already given a link, but, OK, seeing that this is a common enough issue (https://www.google.com/search?q=%22bounded%22+%22OLS%22), let’s cover it here in detail. I made a quick demonstration in R, here’s the notebook https://rpubs.com/EmilOWK/bounded_regression_Lynn with details. 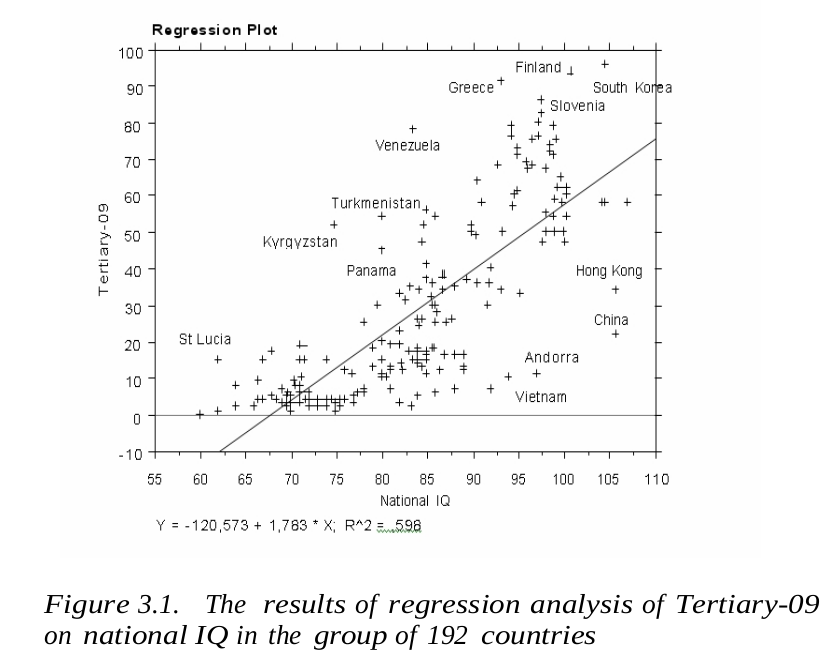 So it’s just straight OLS. We see the fitted line is below 0, x intercept is at 67 or so. The outcome is a percentage variable, i.e., bounded to 0-100%. Hence, if one used this model to forecast educational enrollment in IQ 60 country (supposing we find or create a new one), then we would get an impossible negative value of about -13%. OK, so maybe Lynn isn’t super interested in doing this kind of forecasting, he just wanted to show there is a strong pattern, and he was lazy or statistically incompetent with the model chosen. Not too surprising considering he was 82 years old when writing this book. The hack solution here is just to set the negative values to 0, and sometimes this is good enough.

But if it is not good enough, what can we do? Well, I took a copy of his data from the book, then fit a bunch of more advanced models to the data, shown below: 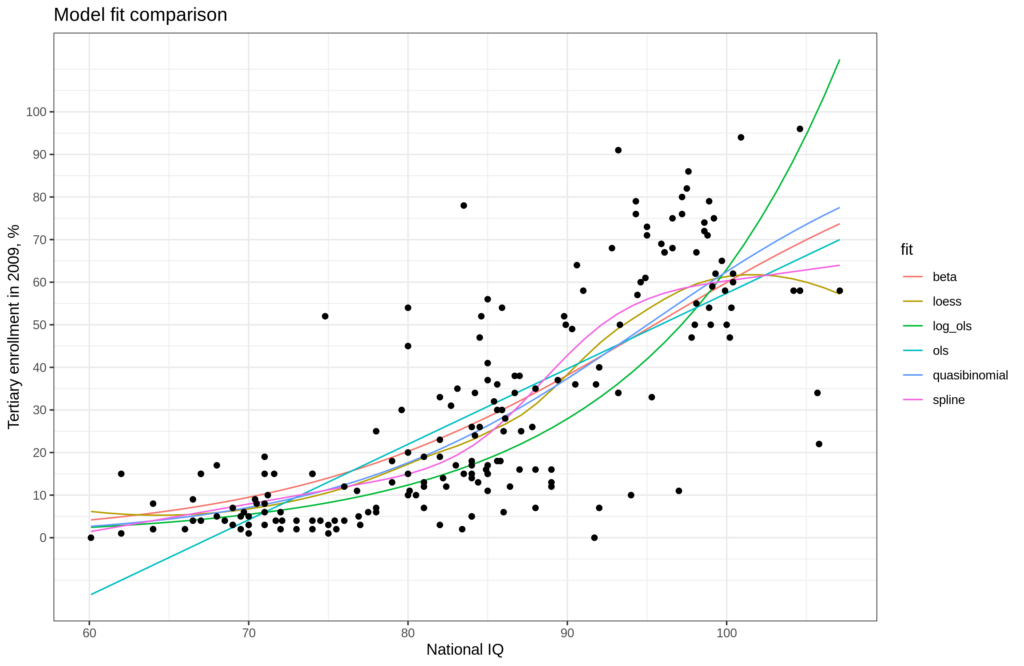 OK, so here we compare 6 approaches to fitting the data. The easiest stuff to use is loess (local regression, only works with few variables, old school), splines (works with anything in GLM, I used the one in rms package), log conversion (assumes exponential model basically), beta regression and quasibinomial are the most appropriate, since they are based on proportion outcome data. Nothing however worked so easily as the splines, which is why they are my first choice in dealing with nonlinear patterns. The models: ols, log_ols, spline, and loess do not understand that the outcome has boundaries, but may or may not produce results within the boundaries. In this case, spline and loess are both OK, but loess has downwards trend at the end due to East Asian countries at the high IQ end, while the spline does not have this (it depends on the settings, I used the defaults for rcs() and you have to read the book for the package for details because the author does not believe in properly informative documentation for whatever reason). The models ols and log_old both produce impossible results (the latter produces >100 at high end).