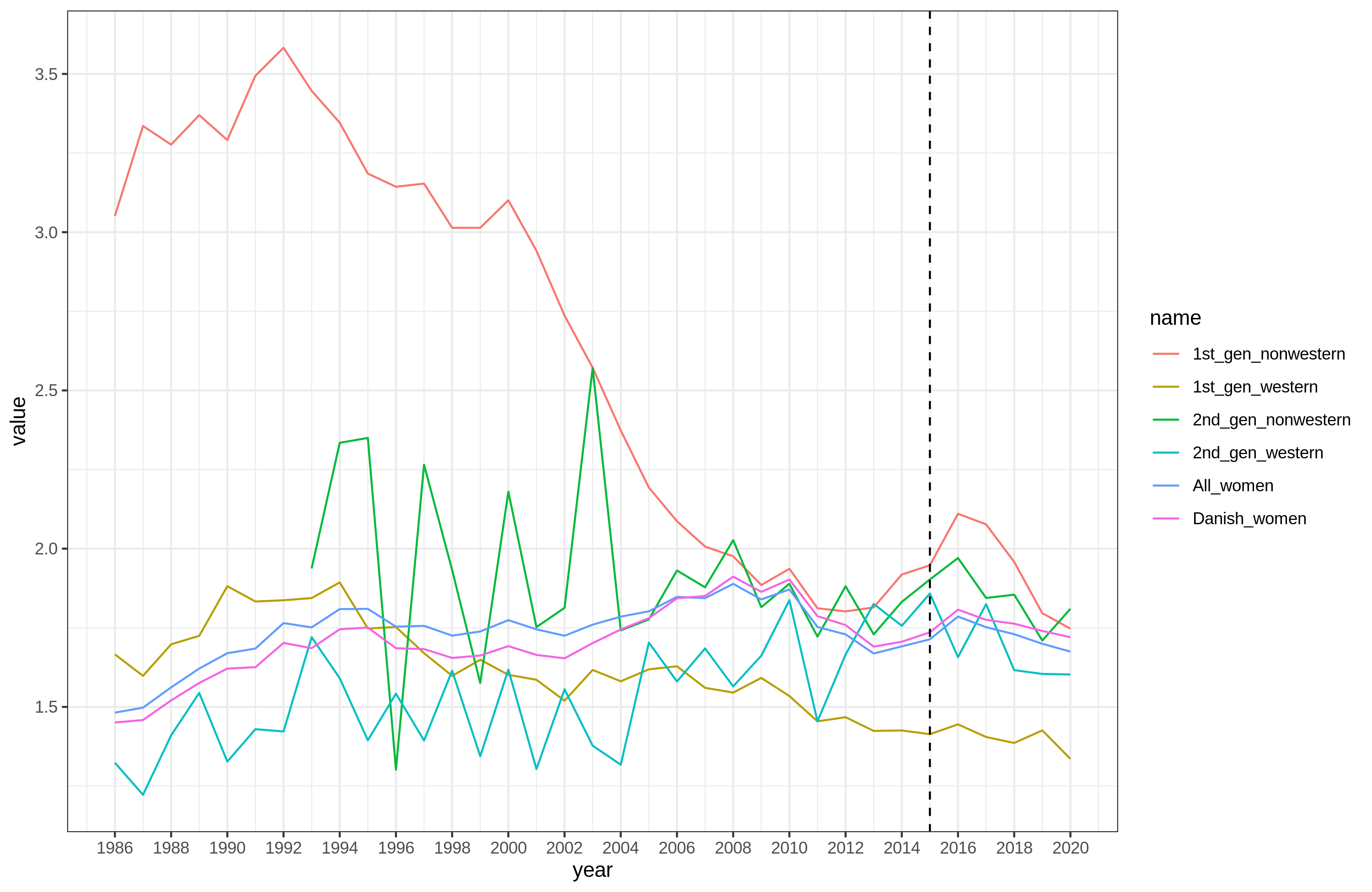 A lot of people are interested in fertility. As a matter of fact, there is no more important metric for long term viability of a civilization (Romans knew it too). Western civilization has been failing at this game for about 50 years, since our collective Great Society transformation. Anyway, so Western countries are usually pussies about this because of the need desire to appeal to feminists. Countries that care less about this are found elsewhere such as Hungary and Singapore. China is working on the problem too, and they might succeed. As Richard Hanania points out, fertility rates are mostly about culture that of promoting motherhood and family values, not about economics. That stuff is mainly cope. You can see where researchers get it from: they do surveys of people and ask them about hindrances for more kids, people will say “MORE [of other people’s] MONEY!” and a theory gets built that’s suspiciously compatible with the socialism of researchers at large. Yet the children don’t coming when we keep increasing welfare for families while not changing the dysgenic culture. This is not rocket science. For those more inclined to a quantitative review, check out this write-up. Actually, here’s the sideways funnel plot: 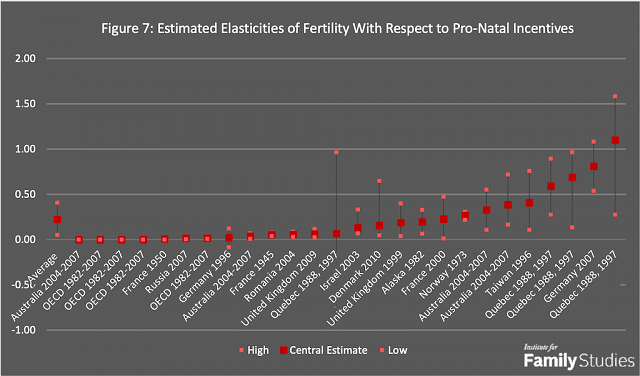 The studies with the smallest error bars find results nearest zero. This collection of studies very strongly suggest a near zero effect of these typical ideas. Try something else!

Anyway, so back in 2014, a Danish travel agency (Spies Rejser) wanted to shake up the situation at home, so they did a campaign for travel for the overt purpose of more children. The reasons to have more kids are stated openly: Danish economy depends on the size of the working age class, which is shrinking relative to the non-working age class due to low fertility. Grandparent cry broken branch. And it may have some other benefits for relationships, happiness, and even health. There are 3 main videos. These are short, few minutes each.

A sexy one: do it for Denmark

Making grandparents happier one: do it for mom

A selfish one / old age one: Do it forever 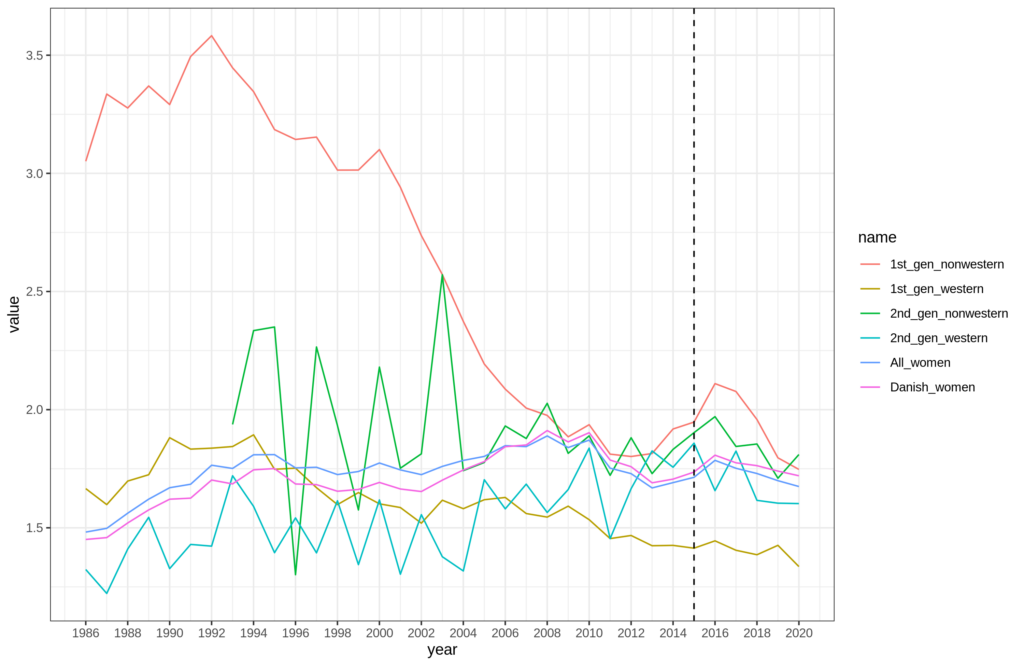 The lines are wiggly due to small samples for some groups, especially 2nd generation western women. The line marks the 2015 year.

We see that fertility was higher in 2015 and 2016, as expected. However, then it declined. Did the effect just wear off? Maybe if we did this every week? Yeah maybe, but then again, the increase we see in 2015-2016 starts in 2013, the year before the campaign. It is also seen the control group of non-western 1st generation women. These are mainly Muslims who don’t speak Danish, don’t watch Danish TV, and are not likely to be interested in Doing stuff for Denmark, especially not anything involving work. They are the red line, and they too increased from 2013 to 2016, and then declined. The Danish group is current at 1.72, which is not impressive but better than the all time low of 1.38 in 1983. Of historical note, already in 2018 I looked at some of these data and noted the lack of support from actual statistics, despite some enthusiastic HBD support for this pro-natalist move.

There is no detectable effect of this campaign.

For good measure, let’s look at some long run data. World Bank only has data back to 1960, but this Danish report has data from 1901 to 2011, and the last decade is covered by the one above. 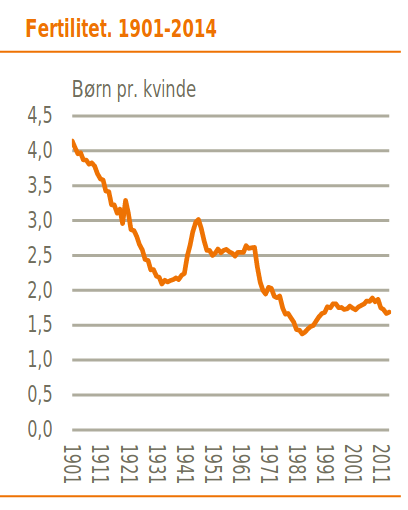 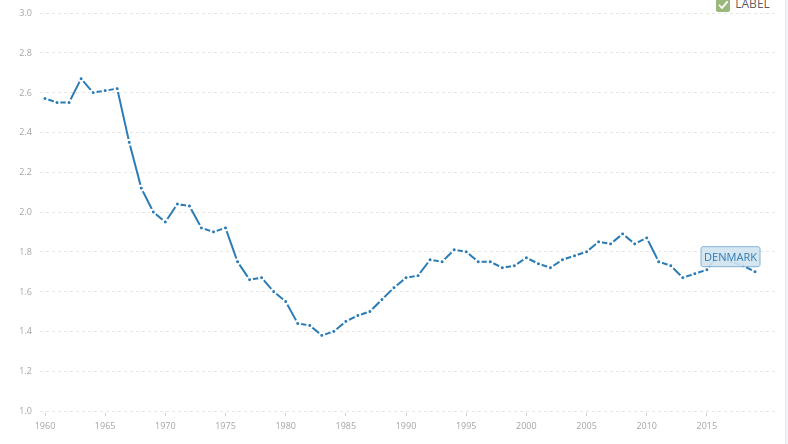 Of note we see:

Typical money-based ideas will not work well. Poor people in history had lots of children, various government policies don’t seem to work but they are expensive. Culture is a powerful motivator. If you want more children, promote pro-family culture and positive motherhood ideals. Danish fertility data show that a single ad campaign by some travel agency is not likely to have accomplished much, this needs systemic change.

Tags: Do it for Denmark, fertility, natalism