Recently there was a piece on ISF about this by ‘Alexander’ AKA. datepsych on Twitter: Is Physical Attractiveness Normally Distributed?. Basically, he takes the OKCupid results and thinks these show the way things are. Pompous and lazy, typical of broscience. One can see immediately why OKCupid data might not be the best way to study distributions of attractiveness:

So let’s look at some more datasets. I spent a few hours looking around. There aren’t a whole lot of papers that plotted the distributions of ratings that I can find and a Google Image search mostly just finds OKCupid data plots, but there’s a lot of studies that gathered such data. Unfortunately, most such studies didn’t share the data, or didn’t use symmetrical designs. For instance, many studies had male students rate female students, but not the other way around. Obviously then, we cannot compare men and women in such data.

After some looking around, I found that several large standard datasets have interviewer rated attractiveness. This is decent because it’s a person who doesn’t know the subject so cannot be biased by any personal relationship. On the other hand, most people only receive a single rating, which gives low reliability. Worse, depending on how fine-grained attractiveness was measured, the data might be suboptimal for comparing distributions. The central two claims by Alexander are that 1) women are more attractive, and 2) the male distribution is decidedly skewed with a long tail of attractive men. Here’s how the OKCupid ratings look like: 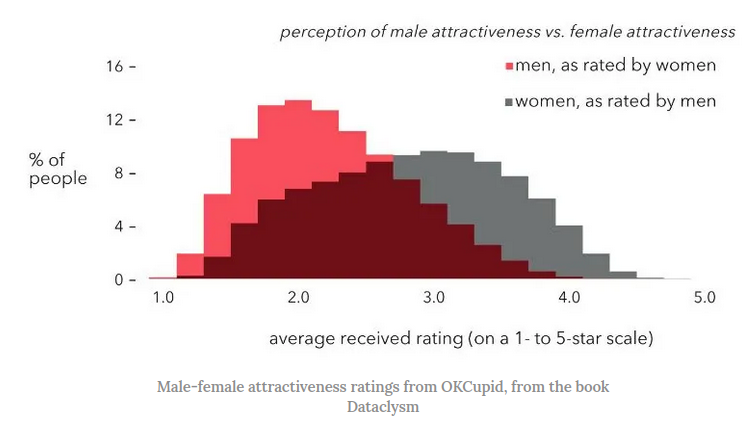 This dataset is also used by the incel.wiki. Really you should click the link, it’s an amazing collection.

Some useful datasets I found:

I’m sure there’s more, but I got consistent results, so I didn’t look further. Let’s take them in order.

There is only one variable about this (RLOOKS), only given in two years and suffering from being 1-5 scale. 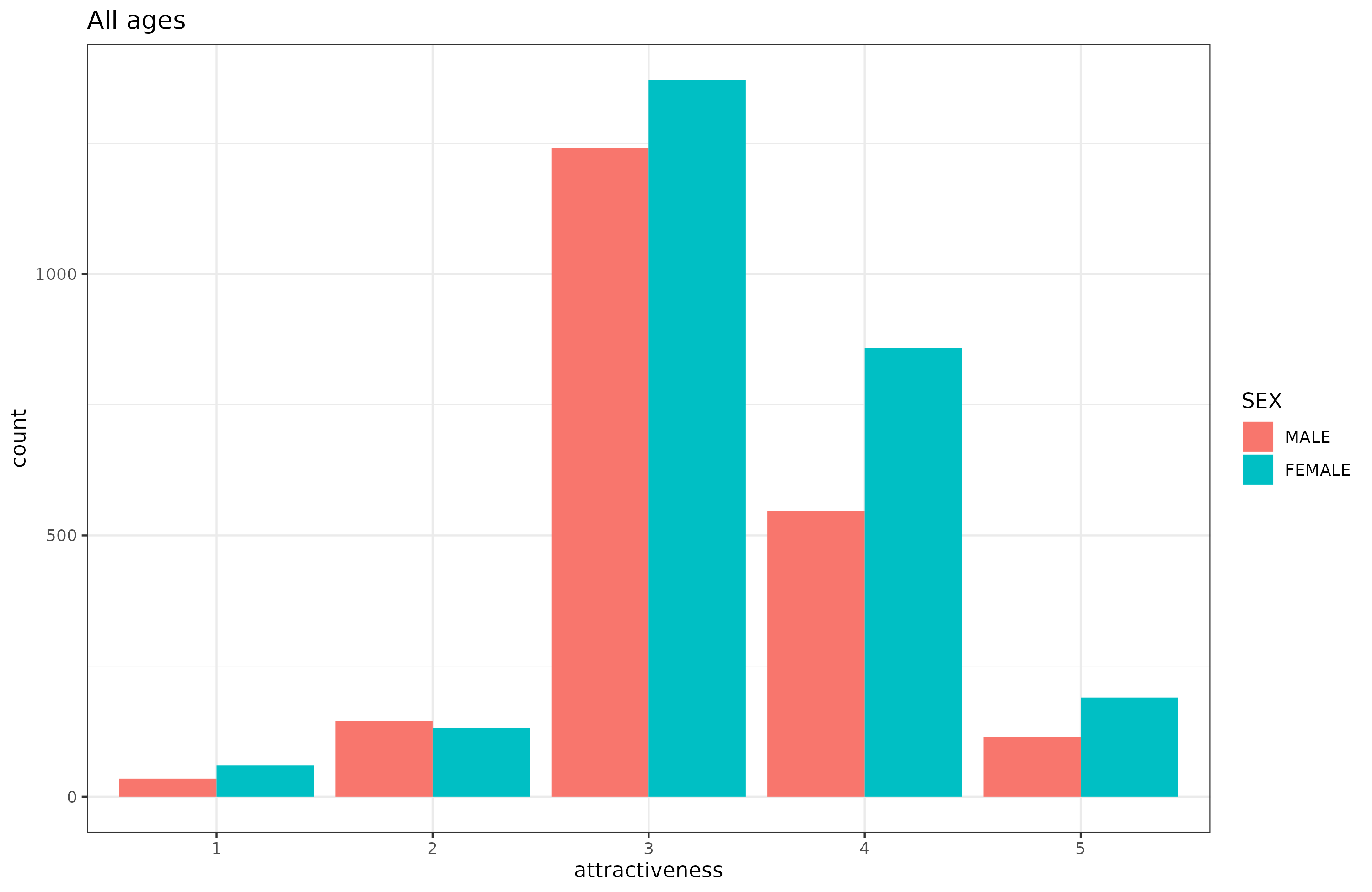 And for prime age, which I here arbitrarily define as 20-30: 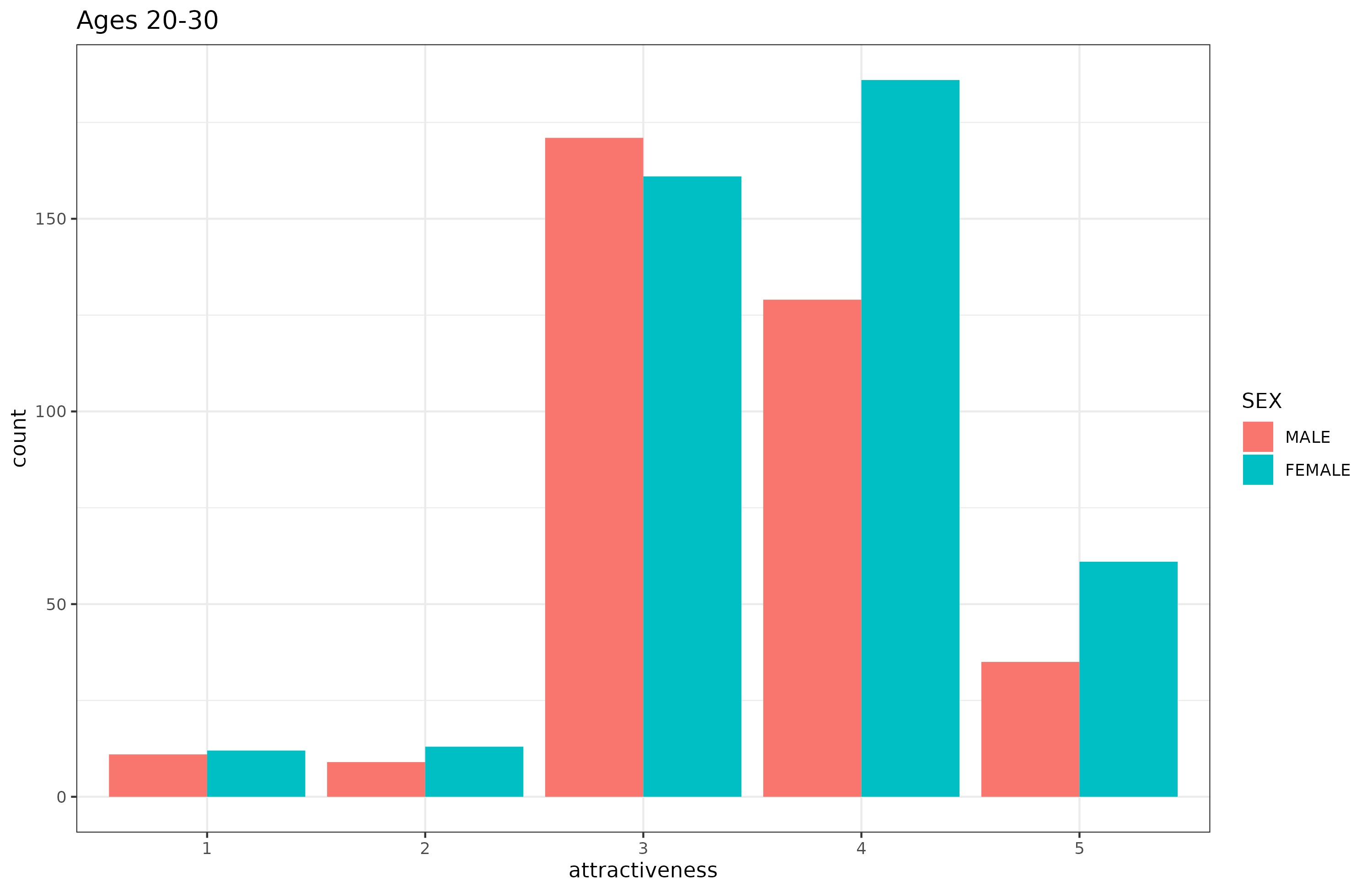 Both show a female advantage, but the skew is in the same direction: towards more attractive than ‘average’, seemingly a statistical impossibility. The gaps are not impressive: 0.14 d for the full sample, and 0.18 d for the younger sample.

This survey is better because it is a longitudinal sample where the same subject was interviewed so far 4 times. Each time of interview had interviewers rate the individual on a 1-5 scale. Documentation says: 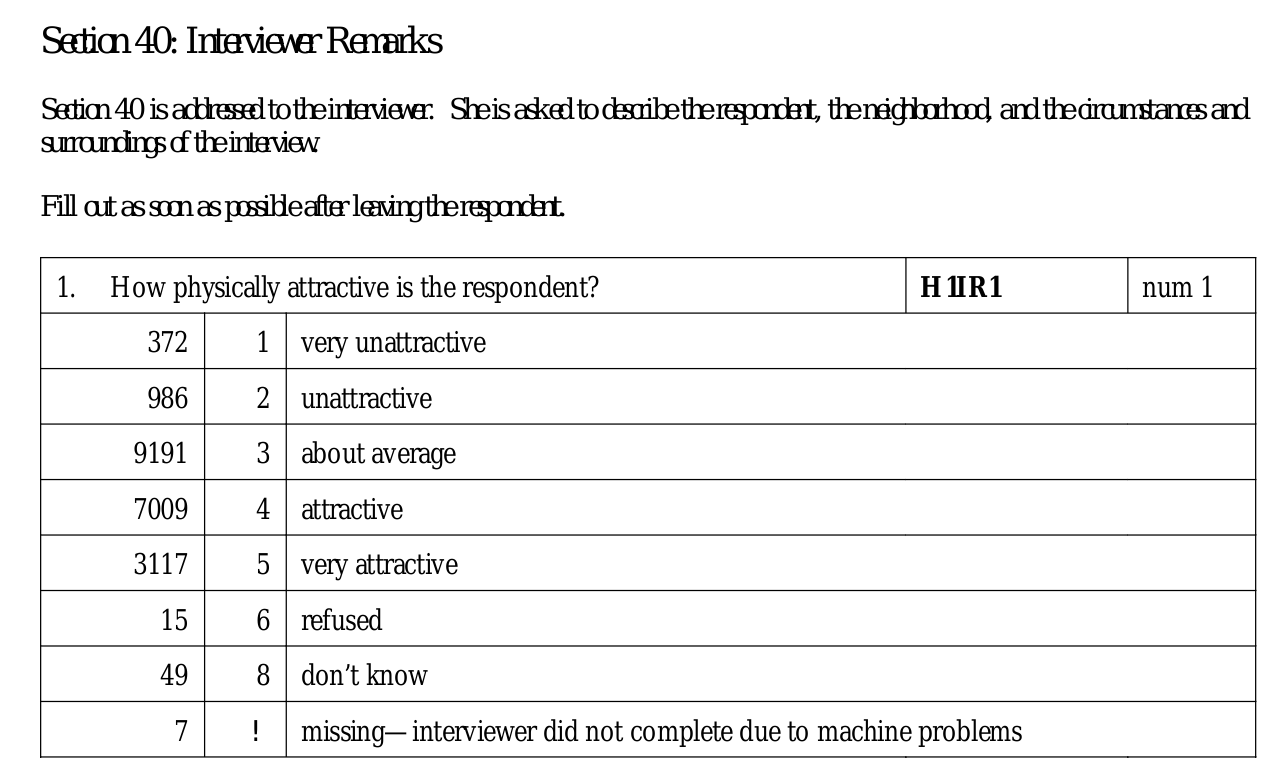 This is the one from wave 1, but the others are about the same.

First, we check whether the ratings actually correlate much with each other: 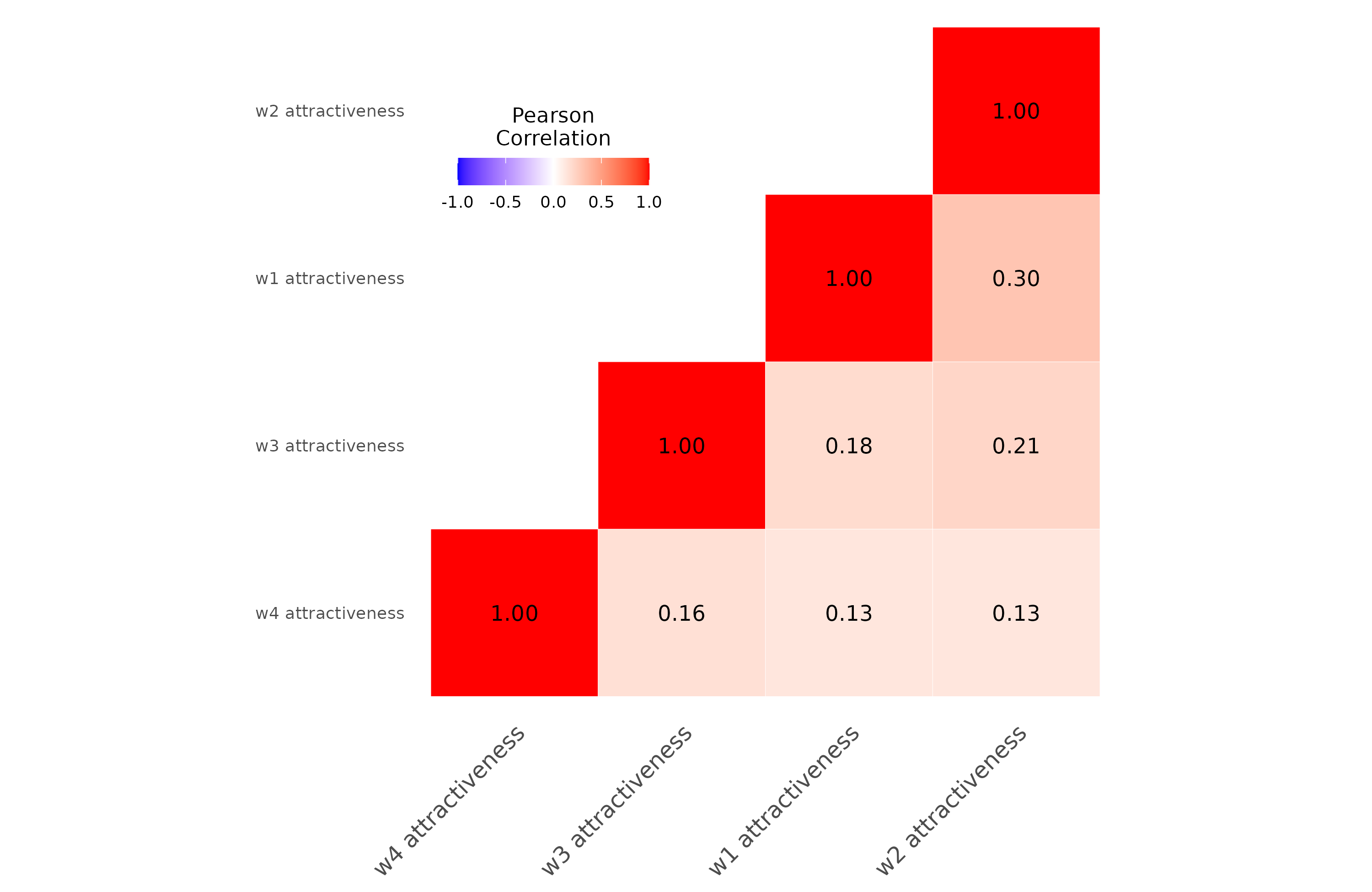 The correlations are decidedly unimpressive. Running a standard intraclass correlation (ICC) shows that the average rating obtains a reliability of 0.48 (average random raters), which this guideline calls “poor”. In other words, people don’t seem to agree much who is attractive and who is not. At least, not when they are rating the same person multiple years apart.

Still, they can be reliable enough to look at a distribution, so let’s do it:

This is for all ages combined as the different surveys were given at different ages, but all of them before 40. On the 1-5 scale, women score 0.15 higher, which is d = 0.29. As the reliability of the variable is quite poor, we can correct this for measurement error using a latent variable approach. I used lavaan. From doing this I got d = 0.45, which is a decent advantage. Like before, we also see that most people are rated above ‘average’.

These people were very old when studied. As far as I can tell from the documentation, they were approached again in their 70’s and only at that time rated by the interviewer: 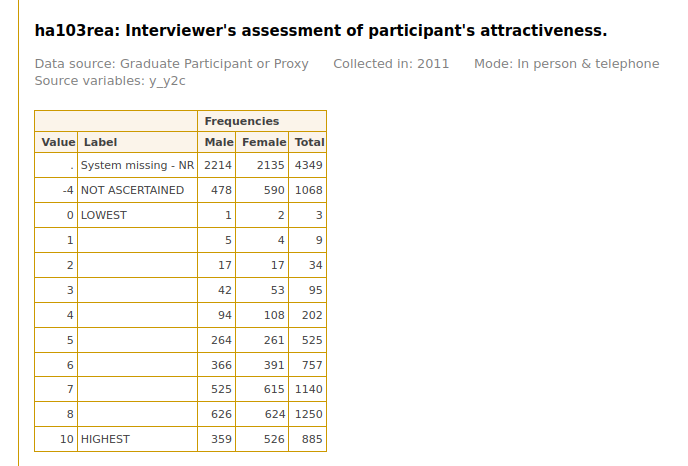 Numerically, women scored 0.08 higher on the 0-10 scale, which is d = 0.07. As people were only rated once, I cannot adjust for reliability. Like before, most people are rated above average.

This is similar to its American counterpart, but ratings were on a 0-10 scale, and each person is only rated once. There is data for many years, bringing the sample size to over 20,000. Overall, for all ages, it looks like this:

We replicate the skew as before, and some female advantage. The female advantages are: 0.14 d for all ages, and 0.31 for young adults. Since this dataset is so large, we can also compute the sex difference by age continuously:

The difference doesn’t really follow what one would expect from evolutionary psychology. Yes, we expect younger, fertile women to be higher, but why are women aged 60 still enjoying an advantage? The difference only goes away at age 75+. 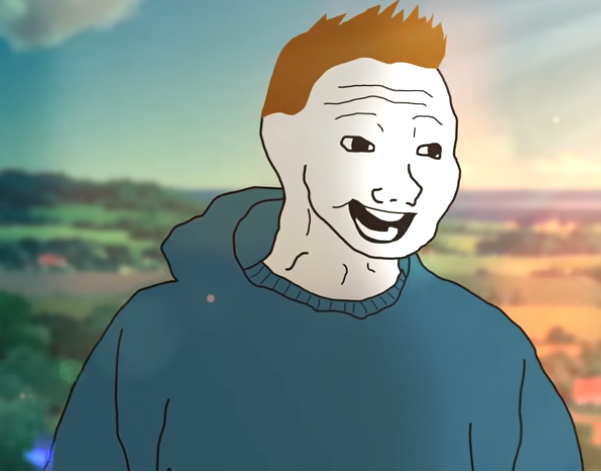