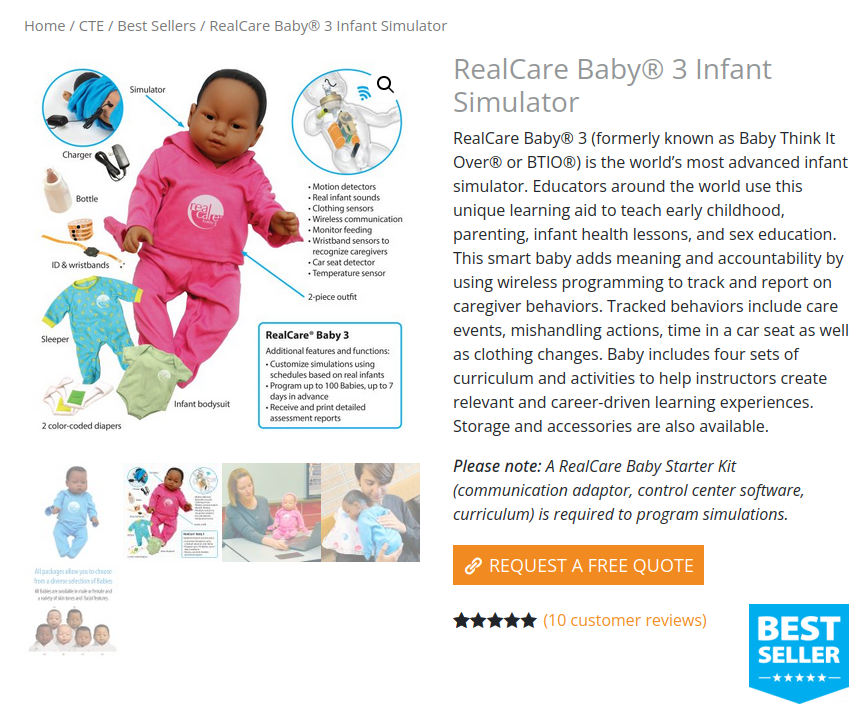 Teenage pregnancy is bad. At least, that’s what most people think, so they are trying to lower the rates. One team of academics got the bright idea of exposure therapy. The idea is that babies are annoying and difficult to deal with, so if we can mimic this with a toy for young girls, this will make them realize how little they want to have a baby, and thus lower the pregnancy rates:

Background
Infant simulator-based programmes, which aim to prevent teenage pregnancy, are used in high-income as well as low-income and middle-income countries but, despite growing popularity, no published evidence exists of their long-term effect. The aim of this trial was to investigate the effect of such a programme, the Virtual Infant Parenting (VIP) programme, on pregnancy outcomes of birth and induced abortion in Australia.
Methods
In this school-based pragmatic cluster randomised controlled trial, eligible schools in Perth, Western Australia, were enrolled and randomised 1:1 to the intervention and control groups. Randomisation using a table of random numbers without blocking, stratification, or matching was done by a researcher who was masked to the identity of the schools. Between 2003 and 2006, the VIP programme was administered to girls aged 13–15 years in the intervention schools, while girls of the same age in the control schools received the standard health education curriculum. Participants were followed until they reached 20 years of age via data linkage to hospital medical and abortion clinic records. The primary endpoint was the occurrence of pregnancy during the teenage years. Binomial and Cox proportional hazards regression was used to test for differences in pregnancy rates between study groups. This study is registered as an international randomised controlled trial, number ISRCTN24952438.
Findings
57 (86%) of 66 eligible schools were enrolled into the trial and randomly assigned 1:1 to the intervention (28 schools) or the control group (29 schools). Then, between Feb 1, 2003, and May 31, 2006, 1267 girls in the intervention schools received the VIP programme while 1567 girls in the control schools received the standard health education curriculum. Compared with girls in the control group, a higher proportion of girls in the intervention group recorded at least one birth (97 [8%] of 1267 in the intervention group vs 67 [4%] of 1567 in the control group) or at least one abortion as the first pregnancy event (113 [9%] vs 101 [6%]). After adjustment for potential confounders, the intervention group had a higher overall pregnancy risk than the control group (relative risk 1·36 [95% CI 1·10–1·67], p=0·003). Similar results were obtained with the use of proportional hazard models (hazard ratio 1·35 [95% CI 1·10–1·67], p=0·016).
Interpretation
The infant simulator-based VIP programme did not achieve its aim of reducing teenage pregnancy. Girls in the intervention group were more likely to experience a birth or an induced abortion than those in the control group before they reached 20 years of age.

The actual intervention is pretty simple and brief:

The Virtual Infant Parenting (VIP) Programme is a school-based preconception pregnancy prevention programme, a component of which is an infant simulator. It is a Western Australian adaptation of the US programme created by Realityworks (Eau Claire, WI, USA) and often referred to as “Baby Think It Over”. The programme seeks not only to delay pregnancy in the teenage years but also to improve knowledge and awareness of preconceptual health issues. Although “Baby Think It Over” is often implemented by teachers, nurses, or doctors, the VIP programme was implemented by school health nurses over 6 consecutive days with four main components to the curriculum: four educational sessions in small groups of four to five girls, a comprehensive reference workbook, a video documentary of teenage mothers talking about their own experiences, and caring for the infant simulator from the last school lesson on Friday afternoon through to the first class on Monday morning.

So caring for the infant is only over the weekend. Nevertheless, the results: 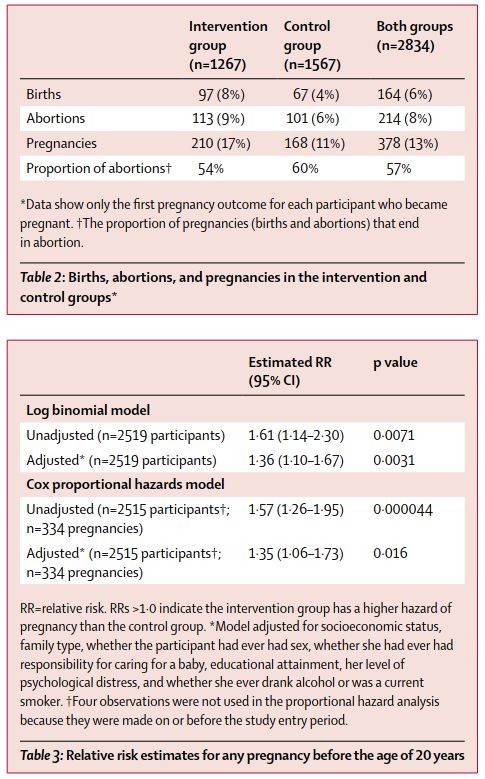 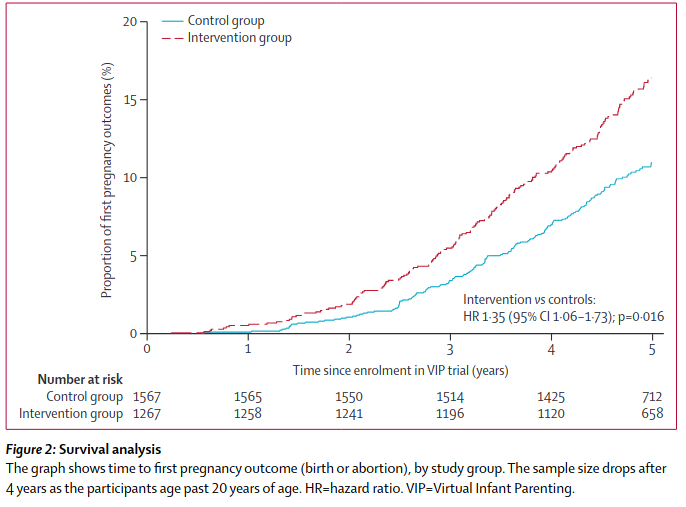 If we buy the results, it seems even this brief intervention increased teenage births by some 10-70%, with a best guess of 35%.

I can’t find a big replication study, as this study was intended as a big replication study of prior studies (that were inconclusive). However, there are some academics — Swedish of course — who used a robot baby with “young people with intellectual disability” to help them “in their process of deciding about parenthood”. Given the above results, I guess this is a kind of dysgenic study in itself.

Assuming we accept the results, I think we should consider this a promising avenue for fertility programs. This is important because the usual economic policies are pretty ineffective. It appears that the exposure to babies, even if they are really robots made of plastic, primes girls/women to think more of motherhood, and not in a bad way as intended. It is not too surprising as many people can recall the longing looks at babies by girlfriends? “He’s so cute” she says, while looking at you (hint: it means I WANT THIS). So while we might not want to promote teenage pregnancy, we should certainly promote pregnancy among university students. So how about some trials of this? One could mandate (or incentivize with some bonus) infant simulator treatment at the final year of studies for female students to prime them for getting started after finishing their education.