One prominent model for why (some) nonwhite race groups do worse is that they experience hostile experience based on skin color. For instance, Hunter (2007) writes:

Although many people believe that colorism is strictly a ‘black or Latino problem’, colorism is actually practiced by whites and people of color alike. Given the opportunity, many people will hire a light-skinned person before a dark-skinned person of the same race (Espino and Franz2002; Hill 2000; Hughes and Hertel 1990; Mason 2004; Telles and Murguia 1990), or choose to marry a lighter-skinned woman rather than a darker-skinned woman (Hunter 1998; Rondilla and Spickard 2007; Udryet al. 1971). Many people are unaware of their preferences for lighter skin because that dominant aesthetic is so deeply ingrained in our culture. In the USA, for example, we are bombarded with images of white and light skin and Anglo facial features. White beauty is the standard and the ideal (Kilbourne 1999).

So, strong claims, but her review has pretty flimsy evidence. The general problem with this idea is that hereditarians also predict that skin color is related to positive outcomes, but they think it’s because of it’s relationship to genetic ancestry/admixture, in particular, lighter skin correlates with more European ancestry in admixed peoples such as US Blacks and Hispanics. Furthermore, they think European ancestry is more enriched with cognitive boosting alleles than is African, hence resulting in the correlation with better outcomes thru cognitive meritocracy. Published estimates of the skin color — ancestry correlation shows it to be 0.20 to 0.70, depending which population is measured and how good the measurements were (Parra 2004; Beleza et al 2013).

A path model of the scenario looks something like this: How can we test who is right? The typical method used by sociologists is just cross-sectional results, which are not necessarily informative about the causal structure. They can be because specific effect sizes are predicted by different models, but generally speaking, no one bothers to formalize colorism in order to derive specific numerical predictions. Another way to examine the question is to look at color variation between siblings, which will only be very weakly related to ancestry differences (which are tiny between siblings). This method has been applied a few times, including to IQ, and the results generally show that colorism is nonexistent or weak (see this post), see also the research discussed in the PING study. 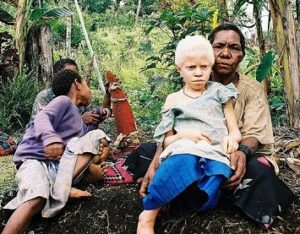 Another method is to exploit a rare but quasi-random type of variation in skin color that’s also not linked to ancestry: albinism. Human albinism is caused by a mutation in one of the few coloration genes. Depending on which one, it may affect skin, eyes, hair, or just one of these. Siblings usually do not share this trait because the mutation is recessive. Assuming 2 carrier parents, this means offspring only has 25% chance of being affected.

Living with albinism is certainly something of a huge impact on one’s life, and one can expect various forms of maltreatment, at the very least on the dating market since it’s considered fairly ugly. But does this extra life stress result in serious psychological malfunction, or do people just learn to live with it? In particular, does it result in cognitive deficits? There is actually a literature review of studies on this: 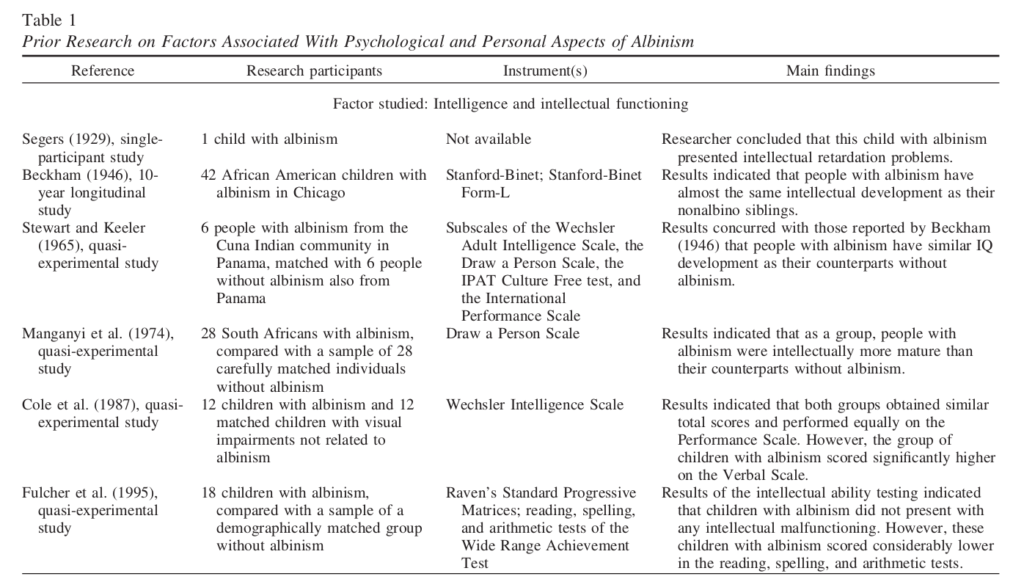 Now, the studies are small of necessity because albinos are quite rare, and they are also quite old. Nevertheless, 5 studies with total n = 106 were compared with matched controls or siblings, and there doesn’t seem to be any IQ difference. If being treated poorly due to miscolored skin was a large cause of lower intelligence, we should have seen it here.

The Beckham study is refreshingly forthright: 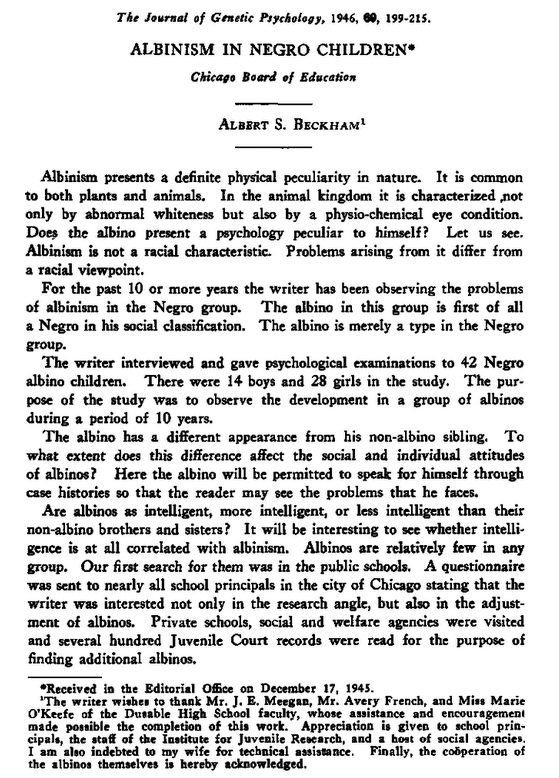