Thanks to Chet Robie for sending me his study.

There’s been quite a bit of research on immigrant IQs. From within our network, Heiner Rindermann and James Thompson published a long analysis of scholastic achievement data:

Immigration, immigration policies and education of immigrants alter competence levels. This study analysed their effects using PISA, TIMSS and PIRLS data (1995 to 2012, N=93 nations) for natives’ and immigrants’ competences, competence gaps and their population proportions. The mean gap is equivalent to 4.71 IQ points. There are large differences across countries in these gaps ranging from around +12 to −10 IQ points. Migrants’ proportions grow roughly 4% per decade. The largest immigrant-based ‘brain gains’ are observed for Arabian oil-based economies, and the largest ‘brain losses’ for Central Europe. Regarding causes of native–immigrant gaps, language problems do not seem to explain them. However, English-speaking countries show an advantage. Acculturation within one generation and intermarriage usually reduce native–immigrant gaps (≅1 IQ point). National educational quality reduces gaps, especially school enrolment at a young age, the use of tests and school autonomy. A one standard deviation increase in school quality represents a closing of around 1 IQ point in the native–immigrant gap. A new Greenwich IQ estimation based on UK natives’ cognitive ability mean is recommended. An analysis of the first adult OECD study PIAAC revealed that larger proportions of immigrants among adults reduce average competence levels and positive Flynn effects. The effects on economic development and suggestions for immigration and educational policy are discussed.

One trouble with their study is the conflation of immigrant origins into a single group. This makes generational differences difficult to interpret, as they discuss:

Differences between immigrants of second and first generation. PISA offers competence results for immigrants of second generation (born in the country of assessment but whose parents were born in another country; NC=54) and first generation (born in another country and whose parents were born in another country). If students of the second generation show better achievement this would support the acculturation hypothesis. Generally, students of the second generation (see Table S4) show better results (SASM2-1 = 12, 1.84 IQ). The positive effect appears across the five PISA surveys(PISA 2000: SASM2-1 = 18; PISA 2003: SASM2-1 = 13; PISA 2006: SASM2-1 = 5; PISA2009: SASM2-1 = 14; PISA 2012: SASM2-1 = 8). The gains are tending to become smaller with time, and in 10 years they became 7.33 points smaller. This is a hint that acculturation becomes weaker, e.g. due to creating own milieus leading to social and cultural separation, facilitated by increasing immigrant groups and certain world views such as Islamic religion. A set to zero of negative effects is here not necessary (no comparisons with natives).

So, preferably, we would want a dataset that allows us to both look at student generation (using place of birth to code as 1st or later generation) and country of origin of parents. One problem here is when parents originate from different countries of origin. In Danish data, the mother’s origin is used if available. Chet Robie et al has a recent study on just this question:

Globalization has led to increased migration and labor mobility over the past several decades and immigrants generally seek jobs in their new countries. Tests of general mental ability (GMA) are common in personnel selection systems throughout the world. Unfortunately, GMA test scores often display differences between majority groups and ethnic subgroups that may represent a barrier to employment for immigrants. The purpose of this study was to examine differences in GMA based on immigrant status in 29 countries (or jurisdictions of countries) throughout the world using an existing database that employs high‐quality measurement and sampling methodologies with large sample sizes. The primary findings were that across countries, non‐immigrants (n = 139,464) scored approximately half of a standard deviation (d = .53) higher than first‐generation immigrants (n = 22,162) but only one‐tenth of a standard deviation (d = .12) higher than second‐generation immigrants (n = 6,428). Considerable variability in effect sizes was found across countries as Nordic European and Germanic European countries evidenced the highest non‐immigrant/first‐generation immigrant mean differences and Anglo countries the smallest. Countries with the lowest income inequality tended to evidence the highest differences in GMA between non‐immigrants and first‐generation immigrants. Implications for GMA testing as a potential barrier to immigrant employment success and the field’s current understanding of group differences in GMA test scores will be discussed.

The PIAAC survey is another PISA like survey but for adults, and also done by OECD. The samples are quite large in general. The key results are: 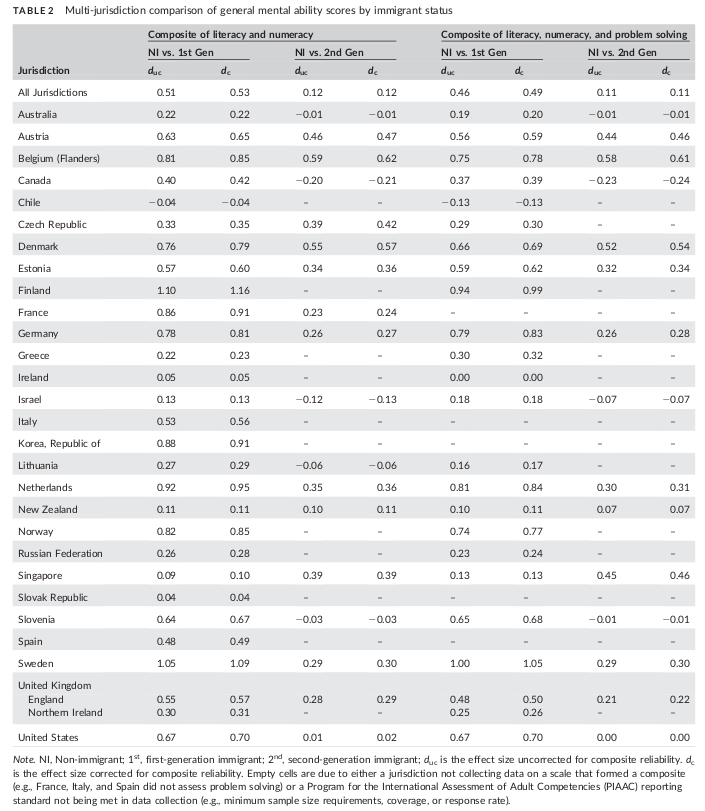 So, sometimes the gaps are quite large as one would expect. They average the gap sizes by cultural groups and get: 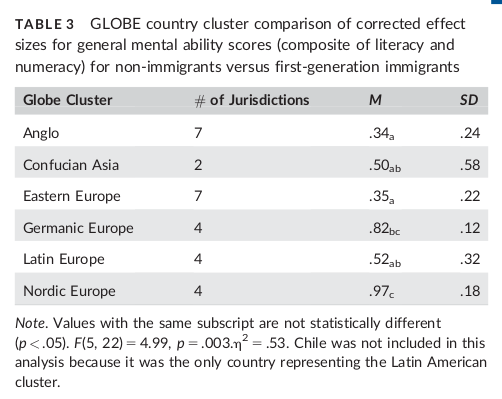 Their value of d = 0.97 for first generation vs. later generation immigrants is similar to my own results (Kirkegaard 2013, 2019). The troublesome finding for hereditarianism here is that the immigrants show marked gains from first to second generation. To pick some of the most important countries:

Thus, we see about ~50% of the 1st generation gap disappears by 2nd generation. This finding seems at odds with genetic models but it’s worth spelling out the assumptions to reach this prediction to understand what it tells us about the model. Specifically, if we assume that:

Under these conditions, I think we can infer that differences between the immigrant generations are due to environmental causes that boost the intelligence. Unfortunately, these conditions are rather restrictive making it a less good test of hereditarian model. Partial falseness of these assumptions together or alone would reduce in some difference between the generations that would actually be genetic in origin, not environmental as might appear. Thus, the really better way to approach these issues would just to have polygenic scores for the population in a regression so that would have a direct control for genetic confounding. Though polygenic scores would only be partially able to control due to ‘missing heritability’/measurement error, they would enable one to detect the existence of a genetic difference between generations even if one cannot control for it effectively.

Still, the assumptions above are testable and should be tested in future studies. The PIAAC survey has of course conducted some of their own measurement invariance tests (as mentioned in Robie et al), so perhaps this rules out (3). I am not sure without having looked in detail, but it’s curious that environmentalists would be the ones in this case to have to assume MI to argue their case, opposite of the usual situation.