Focus article: Intelligence and past use of recreational drugs

Summary: (Using the ‘the Savannah principle’) one gets the idea that the smarter people are, the more likely it is that they seek out more novel experiences. Drugs are a way to do so. So, perhaps the smarter someone is, the more likely that person is to have tried drugs (of various kinds). Or, in the author’s words:

Method “The relationship between intelligence and past use of recreational drugs is explored here using data from a national survey.” 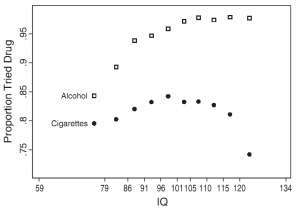 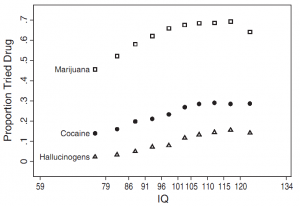 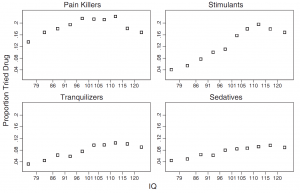 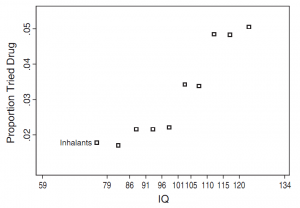 This general relationship seems rather odd, that is, there is a mostly positive until the very high IQ where it is again falling. (Except for alcohol and inhalants.) No explanation immediately springs to my mind. But the author has an idea:

“The figures and the regression coefficients in Table 4 indicate that the relationships between intelligence and the probabilities of past use are not always monotonic. For several drugs, the relationships between intelligence and the probabilities of past use appear to become negative at the highest levels of intelligence. One possible reason for this pattern is homophily. People tend to associate with those similar to themselves in dimensions such as race, age, education and intelligence (McPherson, Smith-Lovin, & Cook, 2001). There is a social component to the consumption of recreational drugs; indeed, many recreational drugs are available only through social networks. High levels of intelligence are unusual and may therefore be socially isolating (Plucker & Levy, 2001; Winner, 2000). This may limit the use of recreational drugs among the highly intelligent.”

This seems plausible to me. I don’t think I could easily get a hold of cocaine and definitely not heroin if I wanted to. I simply don’t associate with people that have access to things that are not THC or psychedelics (e.g. shrooms). The reason seems to be that the people that have access to such drugs are people that know or associate with criminals (obviously, since these drugs are mostly illegal). And being a criminal is negatively associated with IQ (even if it is a weak correlation generally), and people tend to know people around their own IQ level (assortative friendships and mating).