I hit open a wealth of good reading material:

For those who consider it important to know what percentage of the IQ difference is genetic, a methodology that would do the job is now available. In the United States, few people classified as black are actually of 100-percent African descent (the average American black is thought to be about 20-percent white).[55] To the extent that genes play a role, IQ will vary by racial admixture. In the past, studies that have attempted to test this hypothesis have had no accurate way to measure the degree of admixture, and the results have been accordingly muddy.[56] The recent advances in using genetic markers solves that problem. Take a large sample of racially diverse people, give them a good IQ test, and then use genetic markers to create a variable that no longer classifies people as “white” or “black,” but along a continuum. Analyze the variation in IQ scores according to that continuum. The results would be close to dispositive.[57]

[57] The results of such a study would be especially powerful if the study also characterized variables like skin color, making it possible to compare the results for subjects for whom genetic heritage and appearance are discrepant. For example, suppose it were found that light-skinned blacks do better in IQ tests than dark-skinned blacks even when their degree of African genetic heritage is the same. This would constitute convincing evidence that social constructions about race, not the genetics of race, influence the development of IQ. Given a well-designed study, many such hypotheses about the conflation of social and biological effects could be examined.

Such studies with admixture and various other data now exists, except for IQ.

Spearman's hypothesis and the NLSY97-ASVAB, part 1

Spearman’s hypothesis and the NLSY97-ASVAB, part 2

Type 2 diabetes is more prevalent in US American minority populations of African or Native American descent than it is in European Americans. However, the proportion of this epidemiological difference that can be ascribed to genetic or environmental factors is unknown. To determine whether genetic ancestry is correlated with diabetes risk in Latinos, we estimated the proportion of European ancestry in case-control samples from Mexico and Colombia in whom socioeconomic status had been carefully ascertained.

Another study of racial admixture. Here’s the relevant table. 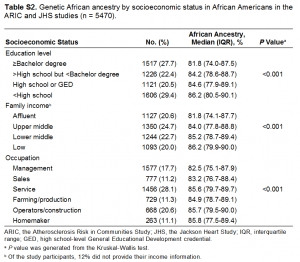 We have analyzed genetic data for 326 microsatellite markers that were typed uniformly in a large multiethnic population-based sample of individuals as part of a study of the genetics of hypertension (Family Blood Pressure Program). Subjects identified themselves as belonging to one of four major racial/ethnic groups (white, African American, East Asian, and Hispanic) and were recruited from 15 different geographic locales within the United States and Taiwan. Genetic cluster analysis of the microsatellite markers produced four major clusters, which showed near-perfect correspondence with the four self-reported race/ethnicity categories. Of 3,636 subjects of varying race/ethnicity, only 5 (0.14%) showed genetic cluster membership different from their self-identified race/ethnicity. On the other hand, we detected only modest genetic differentiation between different current geographic locales within each race/ethnicity group. Thus, ancient geographic ancestry, which is highly correlated with self-identified race/ethnicity—as opposed to current residence—is the major determinant of genetic structure in the U.S. population. Implications of this genetic structure for case-control association studies are discussed.

Nurture only theory is untenable for a rational, unbiased, informed person.

Art Jensen’s 1969 article: How Much Can We Boost IQ and Scholastic Achievement?