Same guy proposed another idea. Wikipedia has data here. However, since i had previously seen that people fudge data on Wikipedia articles (e.g. this one), then maybe it was not a good idea to just rely on Wikipedia. So i did the best thing: fetched both the data from Wiki and the data from the primary source (WHO), and then compared them for accuracy. They were 100 identical for the “total rates”. I did not compare the other variables. But at least this dataset was not fudged. :)

So, then i loaded the data in R and plotted alcohol consumption per capita (age >=15) vs. cancer rates per capita. 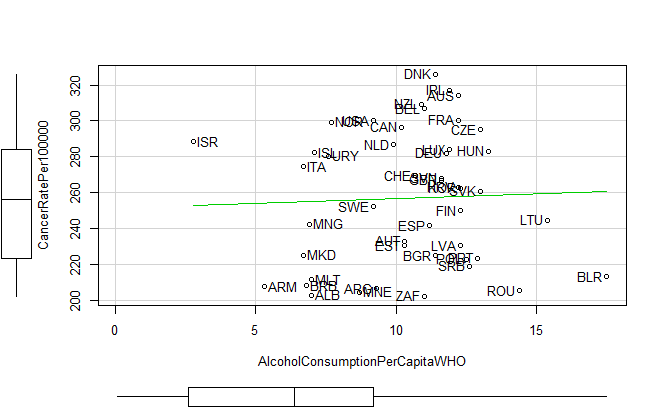 There is no relationship there. However, it may work in multiple regression:

There is seemingly no predictive power of alcohol consumption! But it does cause cancer, right? According to my skim of Wiki, yes, but only 3.5% of cancer cases, so the effect is too small to be seen here.

The data is in megadataset 1.7c.