In the comments on this SlateStarCodex post, someone is questioning my claim that sharing the chorion (what is that?) is unimportant:

First, the paper that you linked doesn’t seem to be as strong as you claim. I quote from page 7: “Intra-uterine environmental factors do influence the intra-pair similarity of MCMZ and DCMZ pairs for birth weight, weight during the first years of life, achieving motor milestone standing alone, externalizing behaviors at age 3, internalizing behaviors and anxiety at age 12, and autistic behavior at age 7.” I’d be very reluctant to wave all of that away as unimportant.

Regardless, even if we were to assume that research generally finds uterine environment to be unimportant, isn’t the (as far as I can tell, let me know if there is something that I missed) very well established Older Brother Effect – that is, having more biological older brothers makes a man more likely to be gay – a glaring exception to that? And if it is, doesn’t that raise the question of what other effects we might have missed?

The first point is to mistake the detection of an effect for an important effect. A large study can find unimportant effects and a study that looks for a lot of effects will find some with p<a (p-value less than alpha aka “significant”) by chance. It is important to focus on effect sizes, not p<a.

So, the proper strategy is to extract the data of the effects and analyze them. I did this by extracting them from the provided supplementary materials. I note that the authors were silly since they not only provided an oddly formatted table but also provided it in .DOCX instead of a spreadsheet. Anyway, I extracted the data in R and analyzed it. The analysis is simply calculating MC – DC. This is the difference between the relatedness of the persons by whether they shared the chorion or not. A null + sampling error model predicts a distribution of effects around 0 with a few outlying values. What do we see? 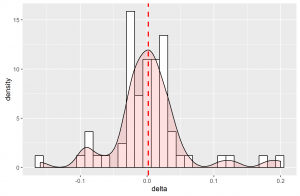 The mean is 0.00, tightly clustered around 0. In fact, we can go further. A null model + sampling error model also predicts that the larger effects in either direction should be the less precisely measured effects. So, we calculate the standard errors of the deltas and plot this against the absolute effect size. 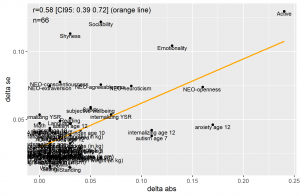 We do see a large effect: the less precise estimates tend to be further away from 0. So, it really does seem that chorion effects are either nonexistent or very weak indeed. Of course, one could invoke the contextual defense: but it’s possible that sharing the chorion is important for some traits and unimportant for others, and you haven’t disproven that. This is the same defense usually adopted by authors whose pet hypothesized effects fail to replicate, so color me skeptical.

Later on, in the comments section of the linked post, Scott says this:

While twins may be sharing an environment in a literal sense, this is not what the term “shared environment” means. When siblings share the experience of a divorce in the family, this too is usually not going to add to the “shared” (C) component of the normal ACE model. The distinction between shared and non-shared or unique (E) environment is subtle. Events are shared only to the extent that they make family members more similar. E is the residual variance left over after partitioning A and C; only part of this component is stable.

Scott may know this but he may still think that prenatal environments make twins more similar. In reality, the action of the chorion is almost never to increase twin resemblance, and therefore, it most often constitutes a non-shared effect. When Price (1950, 1978) reviewed this literature, he argued that nearly all prenatal effects caused MZ twins to be less similar. Subsequent research (recapitulated in Bouchard & McGue, 2002) reinforces this point. This fits with Wilson’s (1976, 1983, here; see also Loehlin, 2016) work on the concordance in growth parameters in MZ and DZ twins. The general pattern is such that MZ twins are less similar at birth than are DZ twins because the former more often share the same prenatal environment; despite this, the effects of the prenatal environment diminish and MZ twins become much more similar with age, a phenomenon dubbed the “Wilson effect” (Bouchard, 2013). Worth noting is that maternal influences may also be heritable (e.g., Lunde et al., 2007; Anum et al., 2009).

Nonetheless, some have argued that the shared experience of the prenatal environment explains a substantial part of MZ twin similarity. For IQ, Devlin, Daniels & Roeder (1997a) argued based on models fit to samples of adoptees – primarily children -, that prenatal influences explained twin similarity in excess of genetic effects. These authors estimated a broad-sense heritability of 47% (32% additive, 15% non-additive) and alleged that the maternal environment explained an additional 27% of the similarity for twins. This is similar to estimates from Loehlin (1989) and Chipuer, Rovine & Plomin (1990), the former estimating H2 to be 47% or 58% depending on the model, and the latter estimating it at 51%.

It’s curious how Devlin et al. chalked up similarity to the prenatal environment when most of the published literature shows that prenatal effects are generally small (Munsinger, 1977; Jacobs et al., 2001; Loos et al., 2001; Marceau et al., 2016), usually work in the opposite direction, and seem to fade with age (while the heritability of IQ and many other traits increases; McCartney, Harris & Bernieri, 1990; McGue et al., 1993; Scarr, Weinberg & Waldman, 1993, cf. Loehlin, 2000, p. 185; Plomin et al., 1997; Polderman et al., 2006; Bergen, Gardner & Kendler, 2007; Segal et al., 2007; Haworth et al., 2010; Briley & Tucker-Drob, 2013; Bouchard, 2013; Tucker-Drob & Briley, 2014). Presumably, if the prenatal environment mattered much for IQ in adulthood, there would be some lasting effect of prenatal interventions, but the evidence here is scant (e.g., Dulal et al., 2018; here). It isn’t even clear that things like malnutrition and prenatal cocaine exposure have an effect on general intelligence (Metzen, 2012). The assumption undergirding this model – that the prenatal environment explains twin similarity – seems to have just been a modeling choice, not an empirical observation or finding.

The other major issue with model fitting exercises like Loehlin’s, Devlin’s, or Chipuer’s, is that they neglect the abovementioned effects of age on heritability. McGue et al. (1993 p. 62) first speculated that Chipuer’s results were due to this sort of neglect; Bouchard & McGue (2002) showed it. These authors showed that studies from young samples, in which shared environmental effects are larger, swamped the data, leading to underwhelming heritability estimates. When properly analyzed by age, the heritability increases (and in some samples, it also decreases a bit in the elderly), while the shared environmental component of IQ becomes statistically or practically insignificant by adulthood. The impotence of the shared environment in adulthood is not due to representativeness issues, as researchers like Nancy Segal (above) and Teasdale & Owens (1984) have shown. Bouchard & McGue (p. 17) write:

In summary, twin, adoption, and longitudinal family studies of IQ all converge on the conclusion that genetic factors increase while shared environmental factors decrease in importance with age, at least until middle age. Summary estimates of heritability from Devlin et al. (1997a), Chipuer et al. (1990), and Loehlin (1989) all fail to take these age effects into account.

There does not appear to be much or good evidence that heritability estimates derived from twins or alternative methods – such as censuses (Schwabe, Janss & van den Berg, 2017), twin family studies (van Leeuwen, van den Berg & Boomsma, 2008), sibling IBD analysis (Visscher et al., 2006), comparisons with other degrees of kinship (Paul, 1980; Bouchard & McGue, 1981), or GCTA (Hill et al., 2018) – are substantially inflated by the effect of the prenatal environment.