Scott Alexander has a new post out summarizing the interpretations of what constitutes non-shared environment in the ACE model estimates from standard (MZ-DZ) twin studies. I’m happy that he wrote that up because I had been thinking of writing up the same points, but he is a better writer than I am. Still, his post is a bit short on numbers and supporting research, so I will attempt to address that by presenting some supporting data in this post.

When we test persons on more than one test, we consistently find that, statistically, someone who does better at one test, also does better at every other test. In other words, all the tests are positively correlated (the positive manifold). If one has a genetically informative sample (and one should!), one can break down the correlations between tests into the part that is A, C and E (cholesky decomposition). Let’s make some predictions from causal models before looking at studies:

Note I have split causes into specific (affects only one outcome) and general (affects all outcomes), but that this is a simplification. It is possible that some causes affect e.g. outcomes A+B, but not C+D, while other causes affect A+C but not B+D, and so on. Such group factor-like causes will also cause positive correlations between E-caused variances, but not strong correlations.

Data – Cognitive ability and scholastic tests in the UK

Abstract. Research has shown that genes play an important role in educational achievement. A key question is the extent to which the same genes affect different academic subjects before and after controlling for general intelligence. The present study investigated genetic and environmental influences on, and links between, the various subjects of the age-16 UK-wide standardized GCSE (General Certificate of Secondary Education) examination results for 12,632 twins. Using the twin method that compares identical and non-identical twins, we found that all GCSE subjects were substantially heritable, and that various academic subjects correlated substantially both phenotypically and genetically, even after controlling for intelligence. Further evidence for pleiotropy in academic achievement was found using a method based directly on DNA from unrelated individuals. We conclude that performance differences for all subjects are highly heritable at the end of compulsory education and that many of the same genes affect different subjects independent of intelligence.

Table 2 has the correlations we want. I took the liberty of renaming E to be what it really is: Everything else (anything not genetic or common between same-aged siblings).

It is not easy to get the general pattern of results when the data are presented like that, so let’s visualize the correlations in a better way. 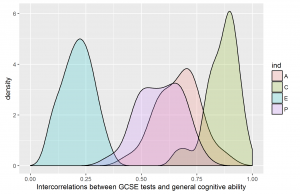 Data – Cognitive ability, scholastic achievement and predictors in the UK

The supplementary materials have the data we want (Table S4, S8, S9 and S10). We have to work a bit since they are only supplied in PDF format (which kind of journal allows or even forces researchers to share data in a near-useless format?). I used Abbyy FineReader to get the data out.

The raw results broken down by ACE and observed (Phenotypic):

But as before, they are hard to grasp in that format. So we group the numbers by ACE with P for comparison, and plot. 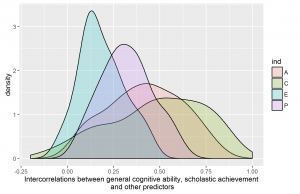 Let’s look at another type of data. Sibling (FS, DZ) and twin (MZ) control studies are interesting because they by virtue of the research design control for C since they only examine within family variance in variables. See my prior post on sibling designs. 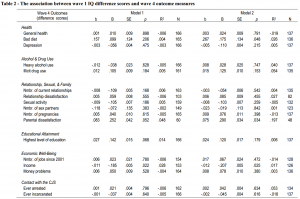 We look at the B column (standardized betas) and note the general results: not much. One might be tempted to go for the near p<a finding for educational attainment, but it is offset by the even larger, negative finding for income. In fact, of 17 tested relationships, 1 had p<a with an unimpressive beta of -.185, which is about what one would expect based on chance (1/20).

It would appear that non-genetic non-common environment differences in cognitive ability do not predict outcomes very well, at least in the Add Health sample. To be fair, the IQ measure is not too good (“abridged version of the Peabody Picture Vocabulary Test- Revised (PPVT-R)”)and the sample size is not large (varies with available data but max N = 166 pairs).

In comparison, let’s consider a study of differences between ordinary full siblings in cognitive ability and outcomes:

In the study, siblings growing up in two-parent families are compared on IQ (the same measure as used in The Bell Curve) and later outcome variables. Murray looks at many outcomes, but let’s make it simple and only include educational attainment, occupational prestige, income, and unemployment. I attach the tables below: 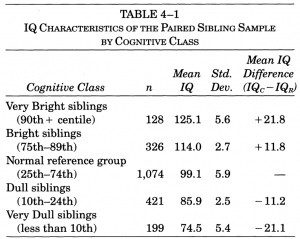 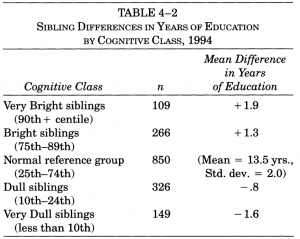 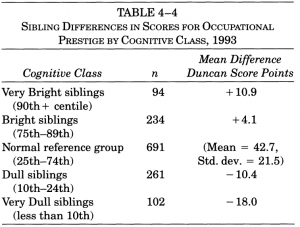 The numbers above are given in natural units so that they are easier to understand if one is familiar with them. However, we also want the standardized units, so they are easier to compare across variables and studies. These are found in another table: 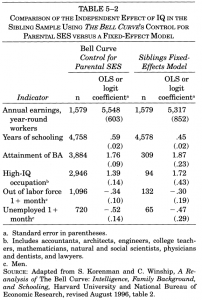 So, we see clear effects when comparing siblings, but either no effects or effects too weak to be reliably detected in the study when comparing MZs. Again, to be fair, there were numerous other differences between these two studies and perhaps they explain some of the discrepancy in the results. It would be preferable if one could obtain a large public dataset of various family members including an oversampling of twins (who would otherwise be too few for useful analysis due to their rarity), and outcome variables, so that one could check whether MZ differences in traits matter. Recall, that the measurement error model predicts that these should have a mean of 0 and be normally distributed around 0. This is a strong prediction that can be tested.