So, does amphetamine work better than methylphenidate? I can only think of one relevant outcome, ADHD. For this, I could find one direct meta-analysis and one indirect. 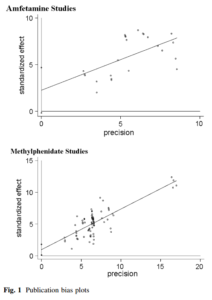 Our meta-analysis of ADHD efficacy outcomes found significant differences between amfetamine and methylphenidate products, even after correcting for study design features that might have confounded the results. Our analyses indicate that effect sizes for amfetamine products are statistically, albeit moderately, greater than those for methylphenidate. The robust effects of all stimulant medications can be seen in Figs. 1, 2, 3, which show that most measures of effect from all studies were statistically significant. These figures also show a good deal of variability among studies with overlapping confidence intervals between many methylphenidate and amfetamine studies, which is to be expected given the small differences in the mean SMDs between medication groups.

Authors do not provide a table with the SMDs (standardized mean differences) between the drugs, i.e. their write-up is poor. From skimming their forest plots, we can see that the SMD between drugs. For the largest comparison, “ADHD symptoms” effect size for amphetamine is about 1.00, while for methylphenidate it is about 0.70. Thus, the SMD between drugs is about .30 in favor of amphetamine.

This study used a stronger method: a within person design:

An n-of-1 trial is a multiple crossover trial performed in a single participant, often with randomization and blinding. N-of-1 trials provide an opportunity to determine the effect of an intervention on an individual who may not fit the eligibility criteria for an RCT. Although they are primarily intended to evaluate therapeutic results in a single individual, preliminary data from systematic reviews indicate that the majority of published n-of-1 trials of health interventions comprise a series for the same condition-intervention pair (unpublished data).

Briefly, the design works by following persons over time and randomly switching them back and forth between treatments. A very nice method that could easily be scaled to all clinical use of treatments where we are uncertain about which drug is the most effective.

The write-up is almost as poor as the first study, but they do report the numeric values from the mean difference scores. They do not appear to be standardized, so the scores themselves are fairly uninterpretable. They do not provide standard deviations to convert these to standardized scores. I’ll make the assumption that these scales all have the same or at least similar SDs. They are based on subscales from two primary scales. They provide the mean difference scores for each outcome and each drug. Outcomes have two variants: parent and teacher rated. I used both. Only one datapoint was missing. With the assumption of commonish SD, we can calculate the drug mean differences for each outcome. I’ve extracted the scores into a spreadsheet. 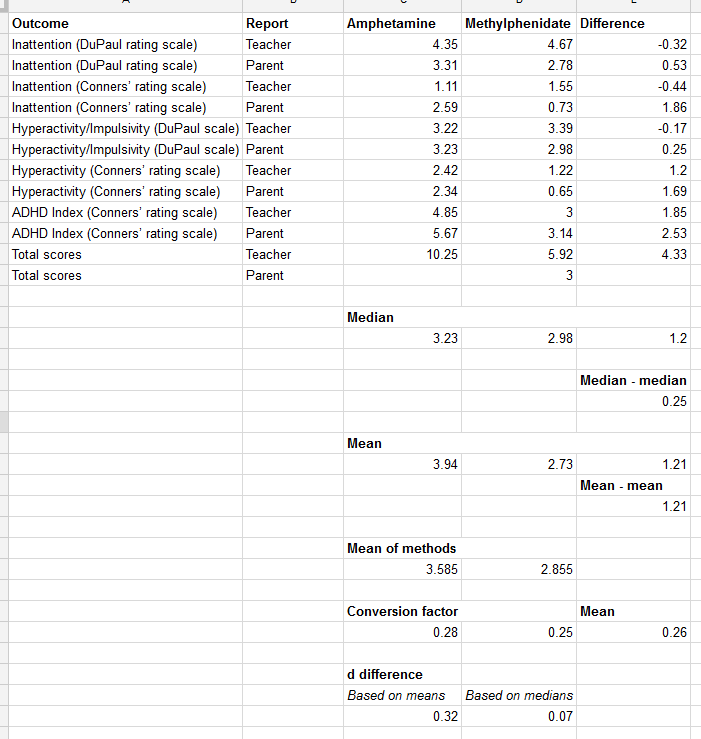