Generally my stance is that people should date/mate who they want. Furthermore, I don’t personally care much about this question or the future survival of statistical clusters (races). Asserting that there are problems with cross-racial mating smacks of 19th century race thinking. However, it would not the first time people in the past got things right we now get wrong. It would be intellectually dishonest — and particularly inconsistent of me given my interest in the race and intelligence question — not to look into the topic just because it conflicts somewhat with my worldview.

Recently I become aware of the literature on the behavioral/mental problems of multirace persons, usually kids. This information came from white nationalists, so I was skeptical. While a lot of the stuff was anecdotal (see content on /r/hapas ), some was not. Consider:

Health and Behavior Risks of Adolescents with Mixed-Race Identity

Objectives. This study compared the health and risk status of adolescents who identify with 1 race with those identifying with more than 1 race.
Methods. Data are derived from self-reports of race, using the National Longitudinal Study of Adolescent Health (Add Health), which provides a large representative national sample of adolescents in grades 7 through 12. Respondents could report more than 1 race.
Results. Mixed-race adolescents showed higher risk when compared with single-race adolescents on general health questions, school experience, smoking and drinking, and other risk variables.
Conclusions. Adolescents who self-identify as more than 1 race are at higher health and behavior risks. The findings are compatible with interpreting the elevated risk of mixed race as associated with stress. 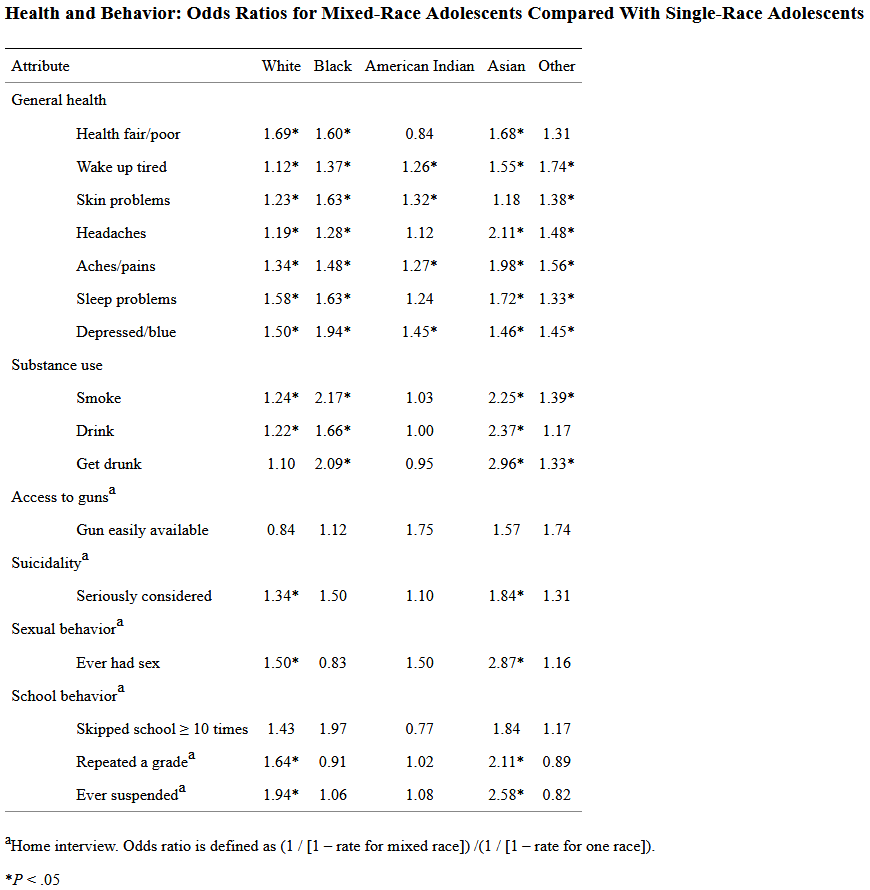 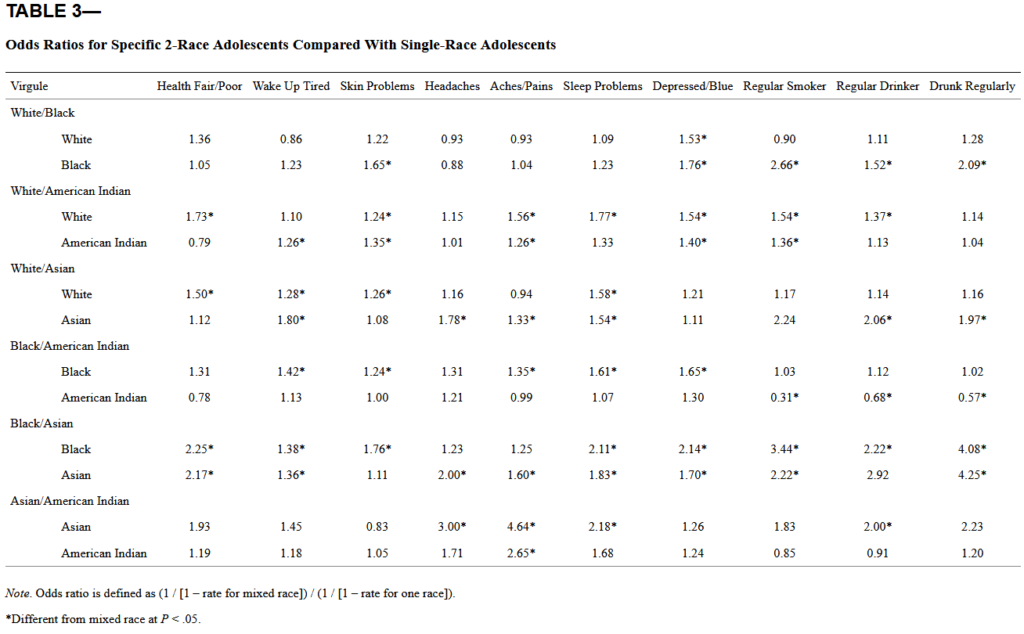 Rates and patterns of substance use and violent behaviors among multiracial adolescents were examined and compared with 3 monoracial groups, European, African, and Asian Americans. The relationships between ethnic identity and the subjective experience of racial discrimination, substance use, and violent behavior were also examined. The authors found multiracial adolescents reporting higher rates of problem behaviors. Several significant relationships between ethnic identity and racial discrimination were found with these problem behaviors. 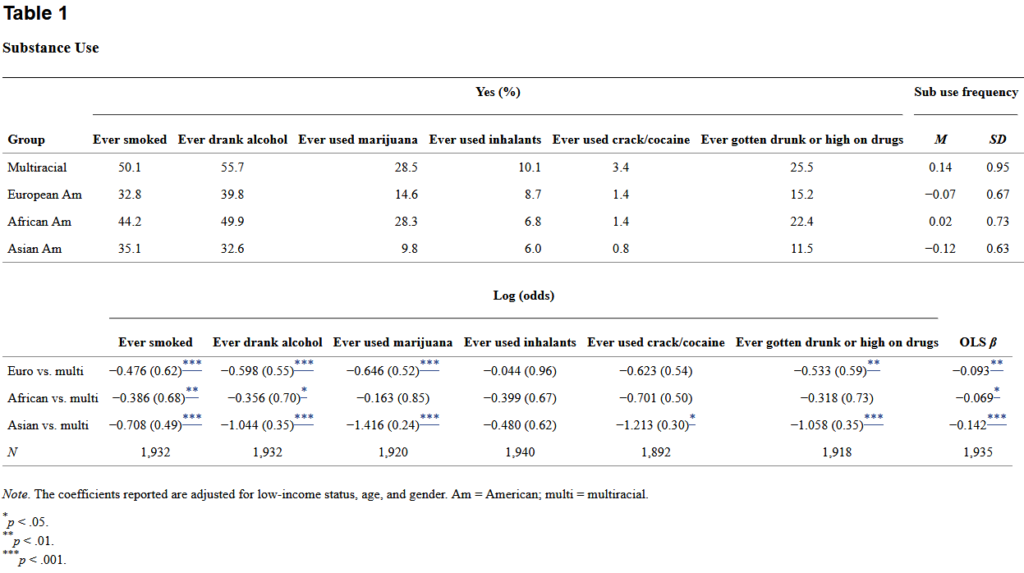 A simple compositional model — and I always begin with simple models — predicts that if some group is a mix between A and B, then the mean value of some trait T should be intermediate between A and B’s trait values. This has repeatedly been found with things like IQ, income, and education, so I was expecting it to hold for mental health and various problem behaviors too (I am drug-friendly, so I don’t necessarily view the drug behavior as problematic, but for linguistic simplicity I went with this). And yet it doesn’t.

Since we collapsed the different multirace persons into a single category, the way one can maximize the predicted values is to assume all multirace persons are a mix of the two groups with the highest values, which here are presumably Blacks and American Indians. It’s an unrealistic mix. Most self-identified multirace persons are probably Asian-White and Black-White (Blacks of course already being a mixed group, which complicates matters).

So, supposing we have a phenomenon to explain, what hypotheses can we think of? I can think of 4:

Hybrid/outbreeding depression. This is the opposite of hybrid/outbreeding vigor/heterosis, and happens when there’s breeding between two populations that are so distantly related that genes start malfunctioning (incompatible genes end up in the same body). This can be seen for cross-species hybrids such as ligers (lion+tiger, MF). Some of these can look downright comical, and are often infertile. Note that the order matters: a liger is not the same as a tigon (tiger+lion). Why does order matter? Because the sex chromosomes come from different parents. Male liger will have lion Y chromosome, tiger X chromosome. Male tigon will have tiger Y, lion X. Wikipedia apparently used to have a list of these, but someone deleted it. Now there’s only the template left. 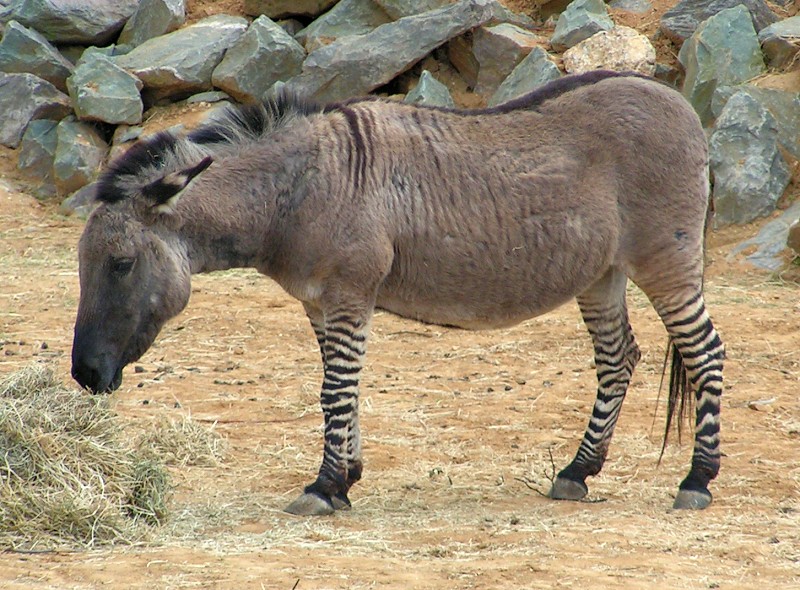 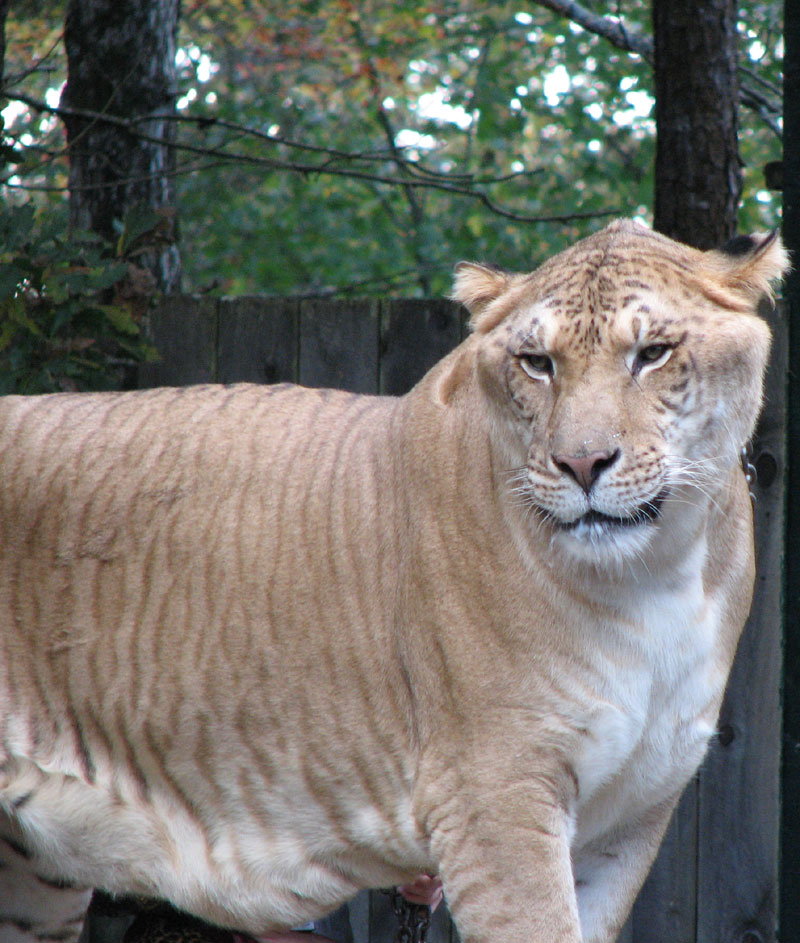 Outbreeding depression is not very probable for humans because humans are so closely related (Fst of .15 or so). However, it does give some interesting predictions, namely that the effect size for the multirace effect should be a function of the difference between the source groups, e.g. as measured in Fst. Thus, the multirace effect should be the largest for part-African mixes, and lower for e.g. White+EAsian (Chi, Jap, Kor), and even lower for White+Indian (as both are Caucasians).

In general, we would in fact generally expect human mixes to produce outbreeding vigor because this would tend to reduce the number of damaging recessive locuses. This only happens to the degree that a trait shows dominance effects, for which there is evidence that trait and GCA do (general cognitive ability). I don’t know about dominance effects for the problem behaviors mentioned here, but it seems very likely there are are some.

Self-selection. Perhaps people who engage in interracial mating (of the children resulting kind) are not a random subset of the population. In fact, we can be very sure that they are not, given that this is a basic and major life choice, and one’s that intensely debated.

People in general do not marry at random (but see), assortative mating is pervasive. Assortative mating however does not explain any such multirace effects. Suppose group A has trait value 10, and group B has trait value 20. By random mating, the persons who cross-group mate are also expected to have trait values of 10 and 20, respectively. However, if we add bidirectional assortative mating, then the cross-maters are expected to be closer to each either: perhaps the A’s will have a mean of 13, and the B’s 17, or maybe both are at 15. It depends on the specifics. Unidirectional assortative mating — if such exists — would tend to ‘push’ one group towards the other — perhaps the A’s would stay at 10 and select B’s with a mean T of 15 — but would never result in the mixed group having a trait value that doesn’t fall in between the two source groups.

However, outbreeding is evolutionarily weird and kind of a risky move, so we can expect this to select for persons with counter-normative and risk-taking traits — which seems related to the traits we see above. Depending on how large the effect size is, this can result in the multirace group having a trait mean that does not fall between the two source groups. If we imagine this self-selection to be +10, then the self-selected mating groups would have means of 20 and 30, and then their offspring would have a mean of 25 — 5 higher than B’s mean. In reality, there would also be regression towards the mean that depends on the true breeding familial effect size (vertical transfer + additive genetic (+ partial non-linear)). This means that the self-selection has to be quite large, at least larger than the gap between the two original groups, for it to explain the pattern we see alone.

The self-selection hypothesis is very likely correct to some degree. The question is to which degree. Luckily, it is possible to examine some aspects of the self-selection hypothesis with easily accessible datasets (e.g. NLSY). For instance, there is a prediction that we should see relationships between problem behavior and openness to engage in outbreeding in a cross-sectional sample. This is based on the auxiliary assumption that people who express such openness in surveys also act on it. This is perhaps not so true. To the degree it is not true, we expect the association to be weaker. If one can get one’s hands on data that include spouse information, this will help a lot. Familial data that have both parents and children is perfect.

Identity issues. In line with the r/hapas discussions and stuff like this, it seems likely some offspring would be prone to identity issues that may affect their behavior. Even if the mixing does not directly affect base-line neuroticism, it would constitute a life-long social stressor.

I note that other groups with identity issues — or what can plausibly be taken as such — also have higher rates of behavioral problems. This includes bisexuals and crime, a finding I semi-replicated in OKCupid data. Non-binary-sexuals have increased rates of mental illness.

Note that identity issues may be just a mediator for problems that have their origin further up the causal chain.

Social stigma. Perhaps the phenomenon is caused by the reactions of others to mixed race persons. Presumably for this to work, such reactions would have to be generally hostile, not generally positive. There are certainly places one can find where the climate to interbreeding are generally hostile, but there are also places one can find where they are not. Thus, by examining variation in this phenomenon across contexts it should be possible to see a moderation effect. In some versions of this hypothesis, mixed race persons would be predicted to be better than both source populations. Contexts to examine include: nations, sub-regions within nations, time, a person’s network. Maybe one could simply examine this question by using the GSS.

I don’t have time to look into this topic in detail now, but if someone is interested, I’m sure the OKCupid dataset would be of some use. I can guide you, but you will have to do the write-up of the study. I can do the coding if it’s a simple study.