Skip to content
Since this one is well-covered already, I don’t need to add much. See e.g.:

Because lots of people keep claiming there are no math ability differences.

Populations worldwide are aging. Cognitive decline is an important precursor of dementia, illness and death and, even within the normal range, is associated with poorer performance on everyday tasks. However, the impact of age on cognitive function does not always receive the attention it deserves.
We have explored cross-sectional associations of age with five cognitive tests (word recall, verbal fluency, subtraction, number sequence, and numerical problem solving) in a large representative sample of over 40,000 men and women aged 16 to 100 living in the UK.
Women performed better on word recall tests and men had higher scores for subtraction, number sequence and numerical problem solving. However, age-cognition associations were generally similar in both genders. Mean word recall and number sequence scores decreased from early adulthood with steeper declines from the mid-60s onwards Verbal fluency, subtraction and numerical problem solving scores remained stable or increased from early to mid-adulthood, followed by approximately linear declines from around age 60. Performance on all tests was progressively lower in respondents with increasingly worse self-rated health and memory. Age-related declines in word recall, verbal fluency and number sequence started earlier in those with the worst self-rated health. There was no compelling evidence for age dedifferentiation (that the general factor of cognitive ability changes in strength with age).
We have confirmed previously observed patterns of cognitive aging using a large representative population sample.

3 different math tests, 3 very robust sex gaps that show essentially no or very little age relationship (subtraction somewhat larger with age). Why is that important? Older women in this sample probably had much less education, especially in technical things like math, than the older men. There is no such big gap among the younger cohorts, and yet the differences are stable. Tells us they are not likely to be socially caused.

Curiously, there is an item level pattern in data like these such that the sex difference is larger (on Z scale) on harder items (originally I saw it from this study of TIMSS data). This essentially results in even more male over-representation in the right tail. I personally confirmed this finding in a sample of 32,000 Jordanian 4th graders (50% of all persons) who took a 40 item math test. Looks like this:

I am currently trying to obtain more large-scale datasets to confirm this finding further.

Sex differences in interests in technical stuff including computers

One very undervalued study of this is the ROSE project. It’s a huge cross-country survey of 15 year olds interest in various things, especially related to jobs. Here’s a few of their charts to illustrate (from their review). 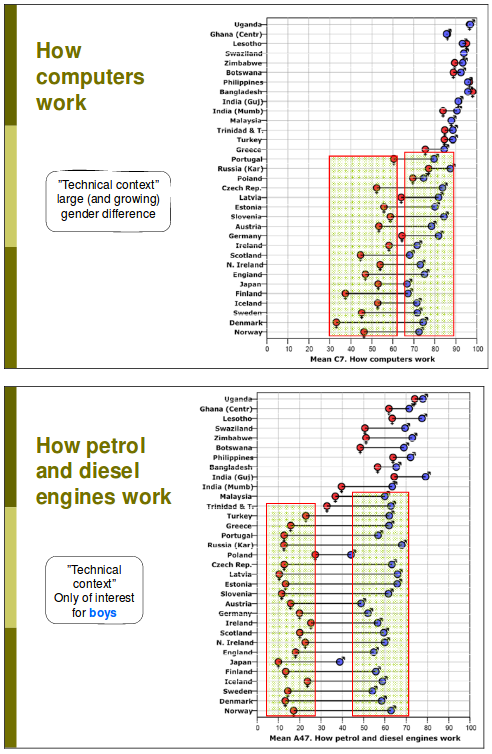 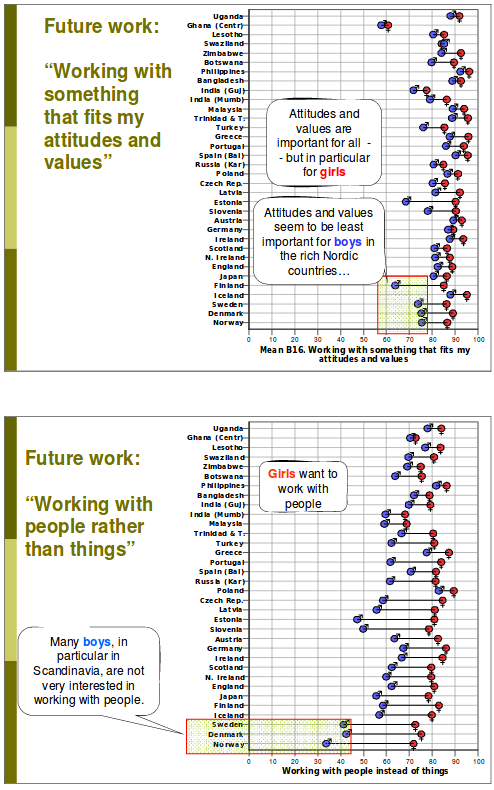 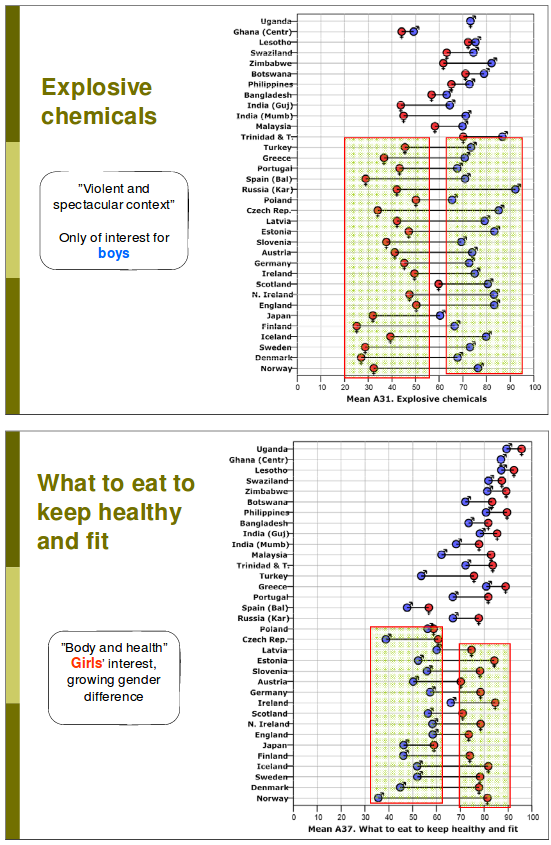 The crappy countries have smaller sex differences, but this is mostly an artifact of their rather extreme acquiescence bias (see this paper). And also, as Scott noted, these countries do also have less sex-segregated societies. Hilarious, is it not, that the countries with the most vocal believers in the identity of the sexes are the same countries with the largest differences.

The main puzzling thing about this area is only the decline in female % in computer science over time. I don’t know why that is.

I guess the most useful thing yet to come out of this is Diana Fleischman’s good idea for a study:

A handy graphic for understanding outrage at statements about average differences between groups pic.twitter.com/w1xZnibbou