So, some smart people say melatonin is useful for sleep deprivation. I submit that it doesn’t do much of anything. Take a random meta-analysis cited in favor:

Exogenous melatonin reportedly induces drowsiness and sleep, and may ameliorate sleep disturbances, including the nocturnal awakenings associated with old age. However, existing studies on the soporific efficacy of melatonin have been highly heterogeneous in regard to inclusion and exclusion criteria, measures to evaluate insomnia, doses of the medication, and routes of administration. We reviewed and analyzed (by meta-analysis) available information on effects of exogenous melatonin on sleep. A MEDLINE search (1980 to December 2003) provided English-language articles, supplemented by personal files maintained by the authors. The analysis used information derived from 17 different studies (involving 284 subjects) that satisfied inclusion criteria. Sleep onset latency, total sleep duration, and sleep efficiency were selected as the outcome measures. The study effect size was taken to be the difference between the response on placebo and the mean response on melatonin for each outcome measured. Melatonin treatment significantly reduced sleep onset latency by 4.0 min (95% CI 2.5, 5.4); increased sleep efficiency by 2.2% (95% CI 0.2, 4.2), and increased total sleep duration by 12.8 min (95% CI 2.9, 22.8). Since 15 of the 17 studies enrolled healthy subjects or people with no relevant medical condition other than insomnia, the analysis was also done including only these 15 studies. The sleep onset results were changed to 3.9 min (95% CI (2.5, 5.4)); sleep efficiency increased to 3.1% (95% CI (0.7, 5.5)); sleep duration increased to 13.7 min (95% CI (3.1, 24.3)).

So, 17 really small studies, total n = 284, so mean of 16.7 per study. They measure some obvious outcomes, and report some > .05 findings. But look at those confidence intervals, two of them are pretty close to 0, indicating a dodgy p value. Sleep onset is self-reported, so who knows about the bias in self-report. We already know science reports too many positive findings, and the strength of the positive bias in effect size estimation depends on sample size. So, we expect a lot of bias here, and we see almost no effect. Summa summarum, to a skeptical reader, the above isn’t much evidence of anything.

So, melatonin is sold over the counter. So tons of people buy it and take it in various forms. But still, medical sites tell us that:

Taking too much melatonin can disrupt your circadian rhythms (sleep-wake cycle). It may also cause other unwanted side effects. So, yes, you can technically overdose on melatonin.
However, a melatonin overdose can be hard to define since there isn’t an official standard safe dose for everyone.
Some people are more sensitive than others to the effects of melatonin. A dose that might trigger side effects in one person may have little effect on someone else.
Young children should avoid melatonin unless otherwise directed by a doctor. Doses between 1 and 5 milligrams (mg) may cause seizures or other complications for young children. In adults, doses in the 30-mg range may be harmful.
In general, it’s better to start low and move up slowly and carefully if you see encouraging results.

I looked at a bunch of sites, and none of them can point to any actual overdose effects, all of them just repeat some random doctor telling us what he thinks might happen. Sounds like bullocks. The listed symptoms of overdose are typical psychosomatic stuff: nausea, dizziness, headaches, irritability or anxiety, diarrhea, joint pain. These things can result from pretty much anything, including worrying about effects of overdose of a harmful drug.

But it gets worse. You know those over the counter things you buy? Yeah, some researchers tested 31 of them and:

Melatonin content was found to range from −83% to +478% of the labelled content. Additionally, lot-to-lot variable within a particular product varied by as much as 465%. This variability did not appear to be correlated with manufacturer or product type. Furthermore, serotonin (5-hydroxytryptamine), a related indoleamine and controlled substance used in the treatment of several neurological disorders, was identified in eight of the supplements at levels of 1 to 75 μg.

So, yeah, I don’t think melatonin supplements do much of anything. Conceivably you might get some kind of effect if you took 1000 times the amount. So let’s try something fairly radical, in the spirit of great science. 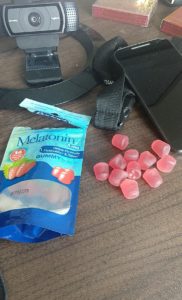 These are claimed to contain 5mg per thing, and there’s 14 in a pack, so that’s 70mg. This would be something like 70/0.3 = 233.33 times the most effective dose big Scott recommends. The nice doctor above says 30mg might be dangerous, so this is 2.33 times as much, or 2.92 the guy from the case report. I ate all of them in a few minutes and then waited around while doing some bioinformatics. And nothing happened.

Error handling in R is odd