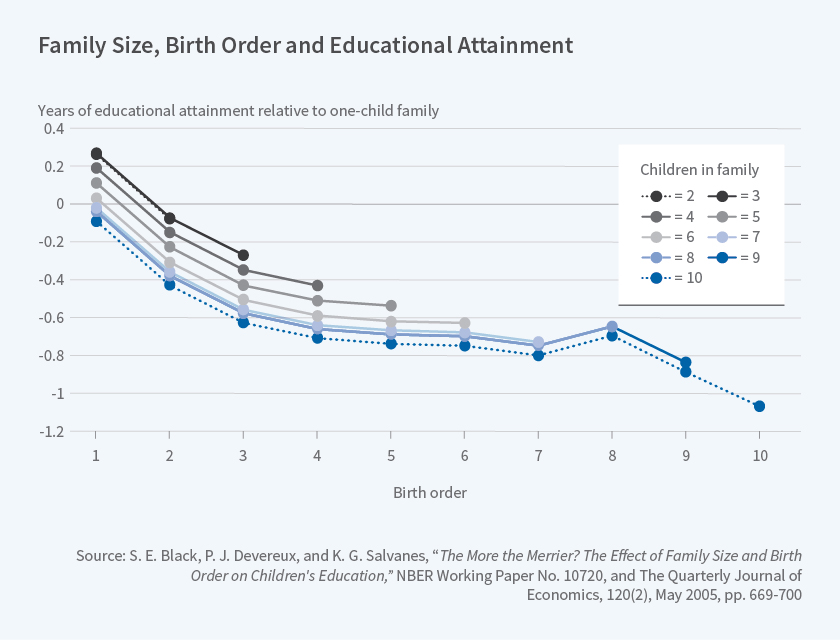 Back in 2018, Scott Alexander published a troll post: Fight Me, Psychologists: Birth Order Effects Exist And Are Very Strong. From casual observation of people in rationalist community, and other any coffee salon demographics group, one can notice that there are a preponderance of first born. Some of this is due to confounding with fertility: parents with genetics that supply these people tend to not have so many kids in general (dysgenics). Alright, but the solution here is simply enough, we just look within families of a given size, and see if the earlier or first-born children tend to do better, or are found in larger numbers in selected groups. So Alexander did this, and because of his popularity, he could rely on his own reader survey of some 8000 persons. His results are clear: 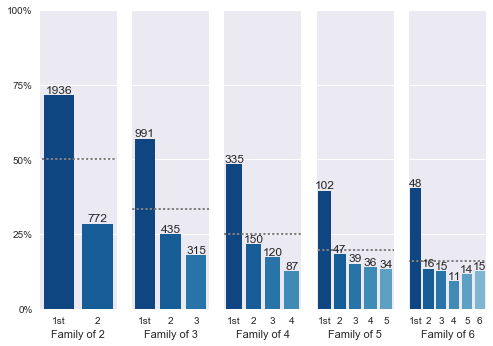 So, within every family size (“parity”), there is a relationship such that first borns in particular have much greater representation. No statistics are presented here, but it’s obvious from casual observation of the numbers above they are highly unlikely given the expectation by just chance (the dotted line). Just for fun, I turned to Twitter to see if this would replicate among my followers too: 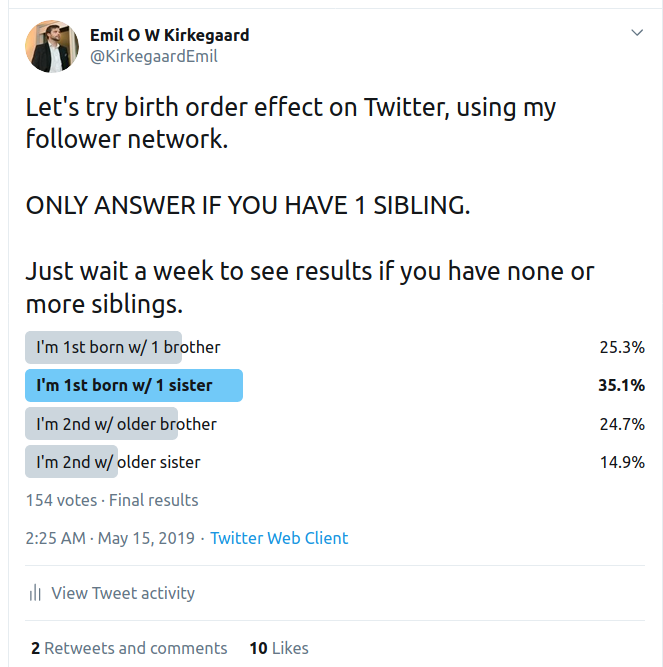 154 total n, and 60.4% are first-born out of 2. This pattern is not new, this 1968 paper by Robert Nichols which Gwern found presents more or less the same pattern as found by Alexander:

The inverse pattern for male homosexuality

One curious thing about this, is that in another area of scholarship, we find a reverse pattern. I have blogged on it before, but there is a long-running finding that among brother sets, the later born are more likely to be homosexuals. A recent meta-analysis by Ray Blanchard:

The fraternal birth order effect is the tendency for older brothers to increase the odds of homosexuality in later-born males. This study compared the strength of the effect in subjects from small versus large families and in homosexual subjects with masculine versus feminine gender identities. Meta-analyses were conducted on 30 homosexual and 30 heterosexual groups from 26 studies, totaling 7140 homosexual and 12,837 heterosexual males. The magnitude of the fraternal birth order effect was measured with a novel variable, the Older Brothers Odds Ratio, computed as (homosexuals’ older brothers ÷ homosexuals’ other siblings) ÷ (heterosexuals’ older brothers ÷ heterosexuals’ other siblings), where other siblings = older sisters + younger brothers + younger sisters. An Older Brothers Odds Ratio of 1.00 represents no effect of sexual orientation; values over 1.00 are positive evidence for the fraternal birth order effect. Evidence for the reliability of the effect was consistent. The Older Brothers Odds Ratio was significantly >1.00 in 20 instances, >1.00 although not significantly in nine instances, and nonsignificantly <1.00 in 1 instance. The pooled Older Brothers Odds Ratio for all samples was 1.47, p < .00001. Subgroups analyses showed that the magnitude of the effect was significantly greater in the 12 feminine or transgender homosexual groups than in the other 18 homosexual groups. There was no evidence that the magnitude of the effect differs according to family size.

So, this brings me to the idea:

So, does it fit? Well, we might first check various paper on birth order and autism (I skimmed many of these). Unfortunately, we quickly realize that this data is almost entirely from diagnoses, and diagnoses present us with difficulties due to:

So what we really want is something else, simpler. We want a continuous measure of autism not a binary diagnosis, and not biased by e.g. parental rating biases from rating multiple kids at a time (sort of halo bias). I looked in vain for this. Fortunately, a certain bird helped out by sending me a link to this article on the work by Sandra E. Black.

This is the best thing I have ever read on birth order effects. It’s based on large register datasets, so there is essentially no sampling error and no selection bias. Some highlights: 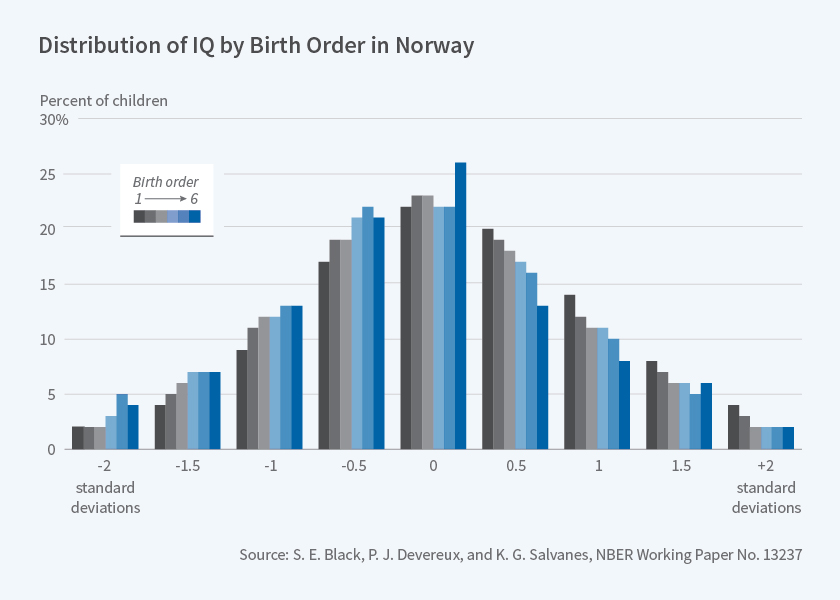 And in particular about hormonal model:

In the economics literature, personality traits are often referred to as non-cognitive abilities and denote traits that can be distinguished from intelligence.6 To measure “personality” (or non-cognitive skills), we use the outcome of a standardized psychological evaluation, conducted by a certified psychologist, that is performed on all Swedish men between the ages of 18 and 20 when they enlist in the military, and which is strongly related to success in the labor market. An individual is given a higher score if he is considered to be emotionally stable, persistent, socially outgoing, willing to assume responsibility, and able to take initiative. Similar to the results for cognitive skills, we find evidence of consistently lower scores in this measure for later-born children. Third-born children have non-cognitive abilities that are 0.2 standard deviations below firstborn children. Interestingly, boys with older brothers suffer almost twice as much in terms of these personality characteristics as boys with older sisters.

But not everything is as predicted. In particular, about personality differences, they note:

These are not the personality correlates of autism (these are: lower scores on all OCEA-ES traits). They are in fact the opposite. The personality advantages seem to be across the board, whereas hormonal model predicts some deficits in social skills but gains in autism related advantages such as ability to focus.

So, it was a nice model, but it definitely can’t stand alone, and maybe does not really work at all. Perhaps it could explain some smaller fraction of the results we presented to begin with. It’s possible that first borns do have more autism, as suggested by some of the large studies of autism diagnoses, BUT also have other advantages in personality traits, some of which out-weigh some of the negative effects of autism on social skills while retaining the advantages for other areas of life.

Paper: “Positive” Results Increase Down the Hierarchy of the Sciences

Quote from Alice in Wonderland: An X-Rated Musical Fantasy (1976)