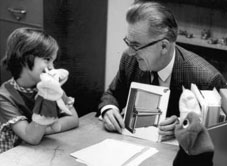 Back in 1988, there was a now mostly forgotten controversy when another scholar dared to suggest genetic causation. In this case, it was about US Hispanics, not blacks/Africans. Since few people know about this research and the affair, it is worth covering here. The paper itself:

A review of research on the cognitive, linguistic, and scholastic development of mainland Hispanic-American children paints a dismal overall picture. Hispanics are the fastest growing ethnic group in the United States, 11% of the population in 1986; about 75% have Mexican ancestry. Less than half of Latin adults speak English well enough for the workplace, and 18% are illiterate. Studies involving English and Spanish versions of the Peabody Picture Vocabulary Test and other psychometric scales indicate that: (1) on tests given in English, Hispanic pupils consistently obtain an IQ of 88, compared to 85 for Blacks and over 100 for whites; (2) individual intelligence tests given in English predict school success as accurately for Hispanics as for other ethnic groups; (3) in contrast to monolingual age mates in Spain and Latin America, the rate of growth in oral Spanish skills of bilingual Hispanic-Americans falls off sharply with age; and (4) Hispanic-American children also have inferior skills in English. The poor test performance of mainland Hispanic students may be due to (1) test bias against minority group children (this stand is largely an emotional defense reaction); (2) bilingualism as a source of confusion for children with inferior language skills; (3) low socioeconomic status, poor environmental conditions, and rural origins; (4) genetic factors, including race; and (5) ethnic motivational and personality factors. Since bilingual education has failed, Spanish-speaking children should be taught oral Spanish in preschool, and then be immersed in English by age 6. In addition, Hispanic parents must emulate Asian-Americans and accept responsibility for their children’s educational outcomes.

So you can see where the the problem is. There were some swift dumb replies, like these:

Dunn’s arguments are flawed and his conclusions inadequate. The genetic position, which attempts to explain academic differences among students of different ethnolinguistic backgrounds, is scientifically unfounded. The implications of IQ test results must be re-examined in light of socioeconomic and cultural differences in a broader historical perspective; such tests have already been determined biased and inaccurate as measures of ability, even among Anglo students. Dunn appears unaware that many minority group members have done well despite prejudicial educational practices. Historically, xenophobia has strong roots in this country, and Dunn has contributed to increase it. He has taken an arrogant position attempting to give credence to genetic arguments without really understanding genetics or anthropology.

Challenges L. M. Dunn’s (1987) arguments in his review of cognitive, linguistic, and scholastic development of bilingual Hispanic children in the US. The present author asserts that IQ scores for different groups can be influenced by the way they use vocabulary; that the decline in US mainland Hispanic students’ vocabulary scores coincides with the onset of classroom instruction; and that socioeconomic status (SES) is not controlled for in the studies presented by Dunn. Genetic components of scores on IQ tests for US-born Hispanics cannot be determined from intelligence tests heavily loaded with a language component, since such tests measure language facility rather than intelligence. Dunn’s discussion of the role of heredity and familial factors in academic achievement and intelligence test scores is considered to be meaningless when children have not been placed in optimal educational environments. It is argued, that native language instruction can result in the elimination of problems discussed by Dunn.

We can note that both of these are published in a journal that catering to that specific ethnic group.

Jason Malloy covered the story back in 2014, so I repost here:

Lloyd M. Dunn, the eminent Canadian-American psychologist who created the PPVT, also wrote an English language companion manuscript for the TVIP that started a relatively small and now forgotten academic controversy that resembles the backlashes against “How much can we boost IQ and scholastic achievement” and The Bell Curve. Dunn’s manuscript, which was intended for educators using the TVIP with US schoolchildren, is a summary of Hispanic performance of cognitive tests. Dunn reviews the literature, which shows a reliable test score gap between Hispanics and non-Hispanic whites, and critically evaluates popular explanations for this disparity, such as socioeconomic status and bilingualism. Influenced by Arthur Jensen’s scholarship, Dunn finds poor evidence for these theories and concludes that inherited racial differences probably have a lot to do with the lower scores of Mexicans and Puerto Ricans:

While it is a very delicate and controversial topic, race, as a contributing factor, cannot be ignored … most Mexican immigrants to the U.S. are brown-skinned people, a mix of American Indian and Spanish blood, while many Puerto Ricans are dark-skinned, a mix of Spanish, black, and some Indian. Blacks and American Indians have repeatedly scored about 15 IQ points behind Anglos and Orientals on individual tests of intelligence …

For the reasons just cited … it would be simplistic and irresponsible to contend that the 10- to 12-point IQ differential is due exclusively, or even primarily, to bilingualism, as has often been argued, or even to all environmental influences combined, including cultural incompatibility … my best tentative estimate is that about half of the IQ difference between Puerto Rican or Mexican schoolchildren and Anglos is due to genes that influence scholastic aptitude, the other half to environment. (Dunn, 1988, p. 73)

The inevitable academic blowback against Dunn’s manuscript appeared in a special issue of the Hispanic Journal of Behavioral Sciences (September 1988, Volume 10, Number 3), where six social scientists take turns accusing Dunn of “misinformation,” “racism,” and “blaming the victim.” In his sheepish response, Dunn remarks that the publisher of the PPVT had stopped distributing his companion manuscript to educators after a major psychological organization moved to blacklist them. Shaken by the professional consequences of his integrity, Dunn apologizes for this portion of his manuscript, calling it insensitive and a “tactical error,” and then ceremonially retracts it from the public record. Perhaps it isn’t so surprising that there have been few subsequent academic review papers on Hispanic IQ. Omission and pretense are accurately called good manners in the context of everyday social interactions—it is equally accurate to call them fraud in the context of academic discourse.

Today, we can of course note that there was a sort of repeat of this history, namely in 2013 when someone decided to do a campaign against Jason Richwine based on his university dissertation about immigration and IQ:

The statistical construct known as IQ can reliably estimate general mental ability, or intelligence. The average IQ of immigrants in the. United States is substantially lower than that of the white native population, and the difference is likely to persist over several generations. The consequences are a lack of socioeconomic assimilation among low-IQ immigrant groups, more underclass behavior, less social trust, and an increase in the proportion of unskilled workers in the American labor market. Selecting high-IQ immigrants would ameliorate these problems in the U.S., while at the same time benefiting smart potential immigrants who lack educational access in their home countries.

It took only 2 days of campaign to get him fired:

Prior to working at Heritage, Richwine worked briefly at the American Enterprise Institute;[5] while there, he wrote a book review for The American Conservative criticizing Richard E. Nisbett‘s book Intelligence and How to Get It.[9] In 2010, he wrote two pieces about immigration and crime for the online magazine AlternativeRight.com in response to a Ron Unz essay covering the same topic in The American Conservative.[6][10][11] After a study co-authored by Richwine regarding the costs of illegal immigration was released by the Heritage Foundation, former Washington Post reporter Dylan Matthews found the dissertation and wrote a blog post about it on May 8, 2013.[5] Richwine argued that Hispanics and blacks are intellectually inferior to whites and have trouble assimilating because of a supposed genetic predisposition to lower IQ.[1][2] Richwine resigned from the Foundation on May 10, 2013.[12]

Oh yeah, the someone is this guy:

Dylan Matthews is an American journalist. He is currently a correspondent for Vox, an online media venture, along with Ezra Klein, Melissa Bell, and Matthew Yglesias.[1]

So, people who like science have plenty of reason to hate these assholes.