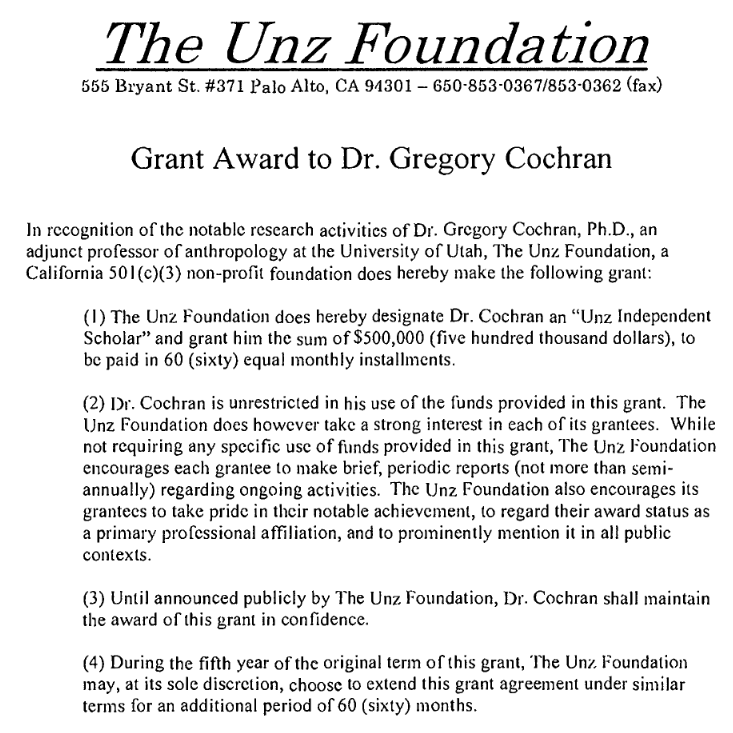 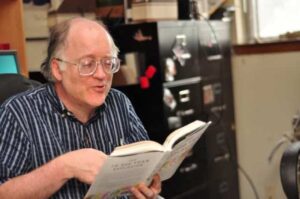 This story has been floating around for a while, but no one seems to have written it up for a post (I tweeted it in February). Well, I believe in exposing bad actors in one’s own camp, so he we go.

Gregory Cochran coauthored an interesting book, The 10,000 Year Explosion: How Civilization Accelerated Human Evolution, in 2009 with Henry Harpending. At some point, wealthy benefactor Ron Unz decided to sponsor Gregory Cochran with some money. We know this from the public filings (archived):

It was later amended to continue for another year:

And what did Cochran do with these money? Not much. Let’s look at his research output. Here’s the ResearchGate profile:

The filing above is from 2009, so the scholarship ran from 2009 to 2015 or so. There isn’t much to see here. Cochran doesn’t have a Google Scholar, but we can see some results. There is an automatically generated page at Semantic Scholar here. Neither changes the picture. The only thing Cochran seems to have been doing is tweeting and blogging, mostly with inane lazy comments. What did it get spent on? Who can say? Cochran isn’t in any legal trouble, since the money was given no strings attached “unrestricted in his use of the funds”.

Ron Unz himself, wasn’t too pleased. He commented on the issue a few times. Anon asked why Cochran’s blog wasn’t being added to Unz.com, and Ron replies, December 14, 2016:

Yet, I still can’t stop wondering why not Cochran. What’s up with it? Did he call you a fool once or twice?

Well, sort of. He’s a smart guy, but unfortunately he believes he’s far, far smarter and more knowledgeable than he actually is. This serious personal flaw leads him to make all sorts of grandiose claims regarding topics in which he knows absolutely nothing and therefore looks ridiculous.

Back about ten years ago, I’d given him a very large unrestricted five-year financial grant based upon his outstanding previous work. Unfortunately (as far as I can tell) that grant caused him to become very arrogant and lazy, and he did no subsequent work of any significance during that five year period. Therefore, I decided not to renew his very large grant for an additional five years causing him to become outraged.

Some time after that, he wrote a blogpost grossly insulting the intelligence of my old Harvard professor E.O. Wilson. This led me to point out some of the obvious flaws in his reasoning in a series of very polite comments on his blogsite. Since my analysis was clearly correct and his analysis was wrong, he immediately deleted my comments and also banned me from his blogsite so that my arguments wouldn’t “confuse” the flock of silly fanboys who foolishly worship his self-proclaimed brilliance.

Based upon this disagreeable history, the only circumstances in which I might allow him to join my webzine would be if he provided me an explicit personal apology for deleting my polite comments disputing his mistaken ev-bio analysis and then banning me from his blogsite. Given Cochran’s aforementioned personality, the likelihood of this happening is nil.

Later on, in 2020, David Pinsen writes in the comments:

As for Cochran, he’s just a total laughingstock, clearly terrified out of his wits about this particular topic.

Cochran, an anthropologist and physicist, is easily one of the smartest commenters on your site. I understand you may have some buyer’s remorse with respect to your financial dealings with him – I don’t know if that’s what motivated this ludicrous take of yours, or you are simply no longer able to judge which of your commenters are intelligent.

I’m not sure I’ve ever heard of that Pienovich fellow.

Also goes by the name Mike Enoch. He co-hosts a podcast with Erik Striker, whose columns you publish, one of which we are commenting under.

Basically, you strike me as just a typically-ignorant rightwing dimwit, who spends his time spouting off on Twitter about the latest controversy he saw on FoxNews.

Searching my username on Twitter and “Fox News” the first thing that comes up is a reply to me by a lefty yenta nearly a year ago. .

I don’t mention Fox News much on Twitter, because I don’t watch it (with the exception of bits of Tucker Carlson’s show that get played occasionally on a YouTube live stream I watch). So your impression of me doesn’t sound too accurate. But I can understand why you’d think your site attracts a lot of “typically-ignorant rightwing dimwit[s]”, given some of the content you publish.

To which Ron Unz replies:

Cochran, an anthropologist and physicist, is easily one of the smartest commenters on your site. I understand you may have some buyer’s remorse with respect to your financial dealings with him – I don’t know if that’s what motivated this ludicrous take of yours, or you are simply no longer able to judge which of your commenters are intelligent.

Look, I’ve known Cochran for about twenty years, probably far longer than you…

At first, I wasn’t particularly impressed by him, but about 15 years ago he co-authored some very important papers that really got my attention. Since he’s a very aggressive fellow, it’s possible that he got more of the credit for them than he deserved. In any event, I was sufficiently impressed that I gave him a large grant.

However, he soon began spouting off on so many other things about which he was obviously entirely ignorant (and wrong!) that his credibility totally collapsed. Frankly, I don’t think that anyone has ever fallen so rapidly in my estimation.

That all happened almost a decade ago. More recently, his late friend Henry Harpending (a very serious scholar) was purged by the MSM, and Cochran’s obviously terrified of suffering the same fate. Presumably, that’s why he now goes around claiming that dead Jewish bodies are subject to “spontaneous combustion” and disappear without a trace.

I’m only very slightly familiar with you, but from what I vaguely recall, you earn your living driving for Uber and (I think) spend a lot of energy ranting about immigrants and Muslims. So perhaps to you Cochran’s a genius…

Unz is referring to some discussions about his own holocaust revisionism, irrelevant for the purpose of this post.

What does Cochran say in his defense? Well, apparently, nothing. I haven’t seen him comment on this. I pointedly asked him on Twitter a few hours ago, will update if he replies…

What do we call a scientist who gets 600k in research funding and doesn't do anything with it?

Why do I spend my time on this? Despite what some academics try to show, there isn’t a lot of funding for this kind of dissident research. So it mostly just doesn’t get done at all. James Flynn noted this a long time ago, 2012:

The collapse of the Ice Ages hypothesis does not, of course, settle the debate about whether there are racial differences for genes for intelligence. If universities have their way, the necessary research will never be done. They fund the most mundane research projects, but never seem to have funds to test for genetic differences between races. I tell US academics I can only assume that they believe that racial IQ differences have a genetic component, and fear what they might find. They never admit that the politics of race affects their research priorities. It is always just far more important to establish whether squirrels enjoy The Magic Flute.

So when there is a rare individual like Ron Unz who is willing to fund dissidents, even those he disagrees with (!), and that money gets mostly wasted on a loud mouthed buffoon, and this causes said wealthy guy not to want to sponsor other researchers in that area, this is a matter of concern worth blogging about.

Paul Hundred rewards us with this gem:

A note about modal collapse