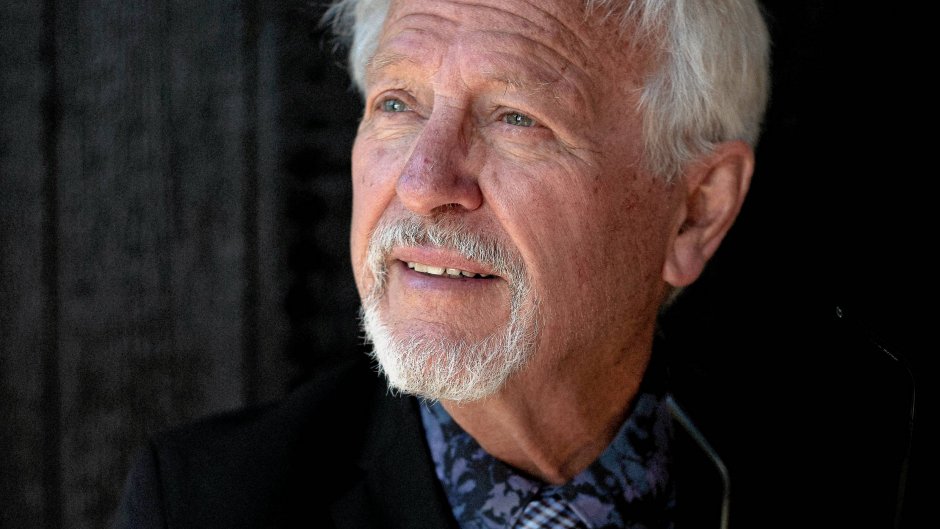 Helmuth Nyborg, my friend and the other main naughty Danish intelligence researcher, turned 85 years old yesterday on 5th January. Due to this, a journalist did a portrait interview with him, which is fairly nice, so I’ve had it translated to English. Thanks to Jurij Fedorov for this work. The interview was published in Kristeligt Dagblad (Christian daily leaf, a somewhat conservative daily newspaper).

If there is one thing this controversial researcher is a guarantor of, it is creating debate

In a British ranking list, Helmuth Nyborg is listed as the sixth most controversial researcher in the world. But that doesn’t bother him, since the list also counts two Nobel laureates. On Wednesday, the former professor of developmental psychology turns 85 years old

Some people thrive best in headwinds, a bit surprisingly Helmuth Nyborg is not one of them. Yet the controversial researcher has often been out in stormy weather – in the media, as a professor at Aarhus University, and politically. So maybe it’s because of his past as a sailor that he stubbornly straps himself to the mast and rides off the storm instead of sailing around.

Researching intelligence may sound peaceful, but it’s not when, like Helmuth Nyborg, one talks about biologically conditioned differences in women’s and men’s intelligence and in relation to race.

The conflicts are numerous – as Information (Danish semi-socialist paper) once wrote, there is hardly a mine that Helmuth Nyborg has not already stepped on – and in 2006 he was close to losing his professorship at Aarhus University, where his research was criticized for being scientifically deficient. However, the rector ended up withdrawing his “services no longer needed” order and contented himself with a reprimand, and in 2007 UVVU (the committee on scientific dishonesty) found that there was no basis for describing his scientific work as scientifically dishonest.

On the whole, a lot has been said and meant about Helmuth Nyborg. And it has not all been good, admits the birthday boy on the phone from the village Adslev in East Jutland, where he lives in an old smithy with his family and still researches even though he retired from Aarhus University as a 70-year-old almost 15 years ago .

“I research full speed, and now there are also some who research me and for me! The English psychologist and professor emeritus Richard Lynn has decided to make a festschrift for me, so it’s really nice to be able to sit back and let others do the hard work,” he says, and states that the title of the festschrift will be: “Intelligence – controversial issues”.

Recently, Helmuth Nyborg’s research into intelligence has gotten yet another opponent, he says: The spirit of the times. That is why it’s even more important to stick to it, now that “most modern universities form politically correct environments”, he says.

“It’s a scandal and a disaster that people have gotten woke and must not acknowledge that there is a difference between people individually or in terms of gender, race, and group. Now we all have to be similar, and researchers who say something else are being fired. It’s scientifically a disaster. ”

Woke is a term for a movement primarily from the United States, which has spread to universities in the West in particular. The movement focuses on new insights and understanding about social injustice, colonialism, racism, and inequality. The term is also used polemically in political debate.

But if it’s such a minefield, why does Helmuth Nyborg stay?

“Everything else would be dishonest. If you are a rubber researcher who is so politically correct that you do not publish an unpopular result, it is obscene. That’s not how science works, or that is, unfortunately it does now. It’s a heretic world that we speak to when we talk about differences in intelligence,” says Helmuth Nyborg, who is currently writing a reinterpretation of Charles Darwin’s theory of evolution and a book entitled “The Suicide of the European People “.

In 2019, Helmuth Nyborg ran for Rasmus Paludan’s party Stram Kurs (Hard Line). But he was not elected, was threatened with murder, and was for a period under police protection.

“My wife and son were not content about it, and I care a lot about my family,” he says.

He and Mette Lund Jensen, a clinical psychologist, have been together for over twenty years, together they have a 15-year-old son Martin. The household also includes two cats and the dog Chili, and from a previous relationship, Helmuth Nyborg has a daughter, Catrine, and through her the grandchildren Thor and Stina.

In his own words, Helmuth Nyborg is happy with his life. But the legacy could be a mixed affair, he thinks.

“Some will say I was a rascal who didn’t learn how to stay quiet, and others will say: He tried though.”

What his own IQ is, he thinks, is irrelevant.

“But I wish it was higher,” he says with a laugh that makes him cough.

On the last question to the portrait here, namely what the journalist could have asked about, but did not, he shouts “Mette” out into the room, and leaves the phone to “his harshest critic”, who also disagrees politically with him.

“It’s Mette here, wife of twenty years,” the voice says on the phone, and then she answers:

“You could have asked what Helmuth is, beyond being dedicated to work. Now, of course, it’s me who answers, but it’s true enough anyway: Helmuth is a very open and friendly person, we live in a village, and it’s clear that he has a great presence in meeting other people.”

Occasionally Helmuth Nyborg is still out kayaking. As a young man he was one of the world’s best kayakers, and in 1960 he won bronze for Denmark at the Olympics in Rome in the discipline 4×500 meter kayak together with Erik Hansen, Arne Høyer and Erling Jessen.

From my personal collection of photos

In this 2020 photo he was told to imitate a certain meme. 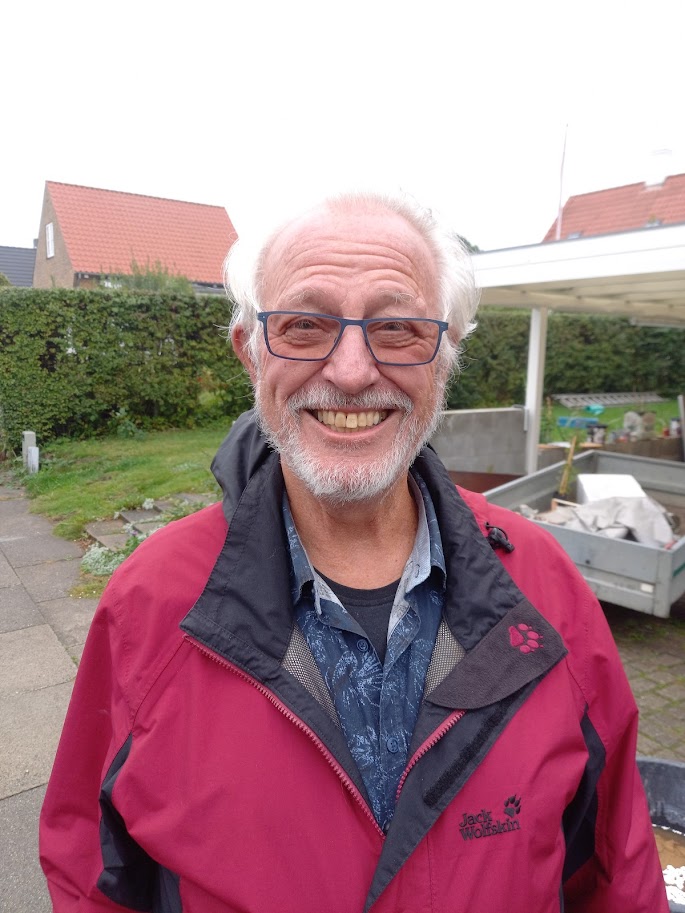 This photo is from the 2016 ISIR conference in Saint Petersburg. There was an excursion to visit the majestic Peterhof Palace. Helmuth is doing his majestic stance. 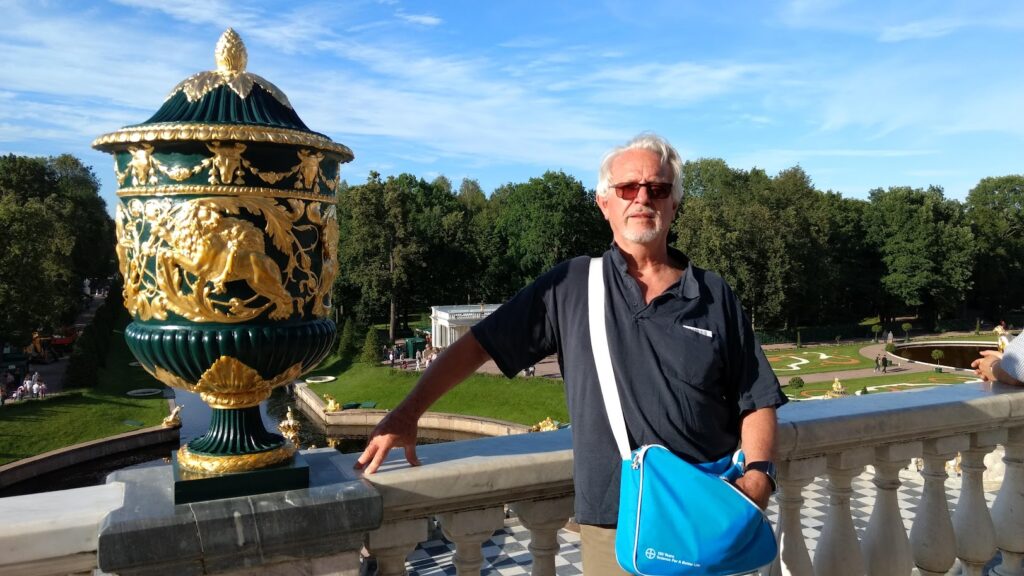 Here at the 2018 ISIR conference in Edinburgh. 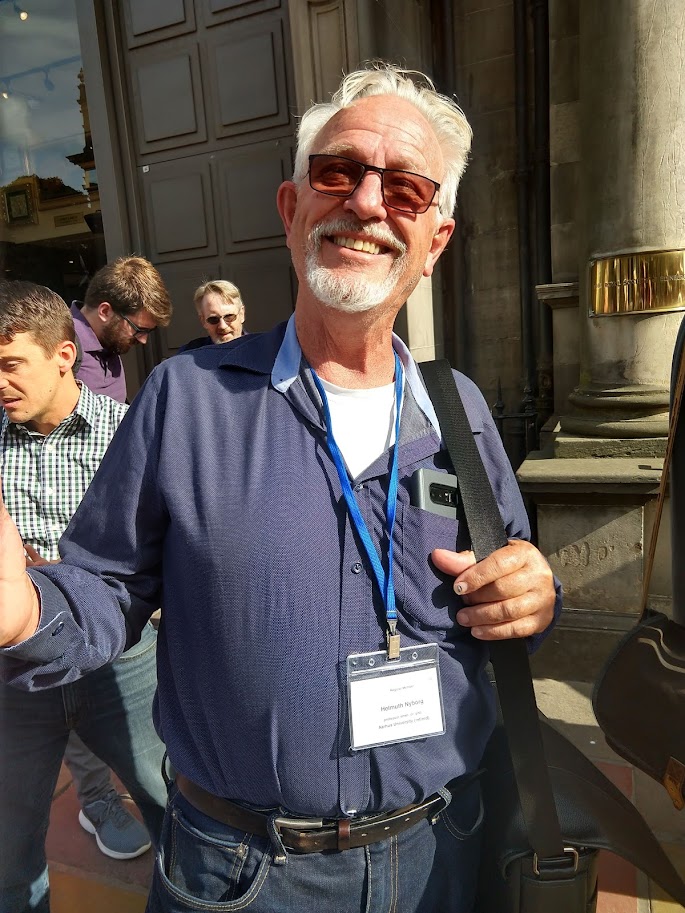 Finally, new year’s comes once a year. The same procedure as last year, naturally. Here in 2019 with myself. Looks like a desperado theme.