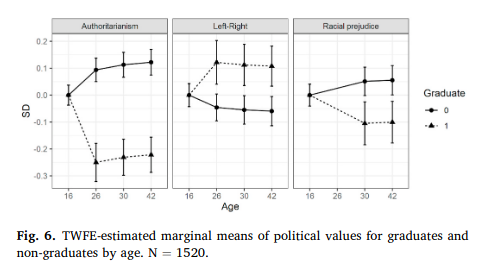 Someone sent me this new study that I hadn’t included in my review from back in January:

An individual’s level of education is increasingly significant in explaining their political attitudes and behaviour, with higher education proposed as a new political cleavage. However, there is limited evidence on the causal effect of university on political attitudes, due to self-selection into educational pathways. Addressing this gap, this article estimates the change in political values that occurs within individuals who graduate from university by applying longitudinal modelling techniques to data from the 1970 British Cohort Study, overcoming the selection problem by accounting for time-invariant confounding. It provides the first causal estimate of higher education specifically, finding that achieving a degree reduces authoritarianism and racial prejudice and increases economic right-wing attitudes. This has important implications for the study of politics: as populations become more highly educated on average, we should expect continuing aggregate value change towards lower levels of authoritarianism and racial prejudice, with significant consequences for political behaviour. 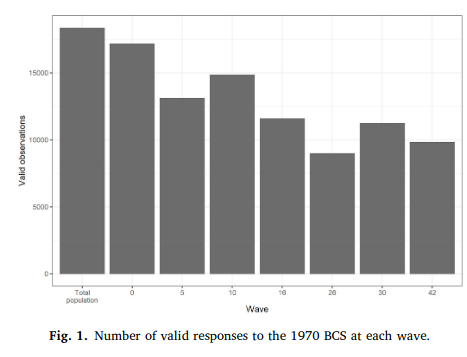 Still, because it is a longitudinal study, which asked the same survey questions more than once, we can do within-person studies (and we love those). The idea with these is that people acquire their university degrees at different times in their lives, so one can follow the same people over the years, and they will vary somewhat in their year of attending. This allows one to pull out the effect of university from aging to some extent. Additionally, because one measures the same subjects over time, any causal factor that is constant throughout someone’s life is automatically controlled for. This thus includes genetics and upbringing effects, which we know includes the most of the plausible confounding factors. Thus, insofar as it is random who acquires university education earlier and later in life, this allows us to estimate the causal effect of university education on politics. If it is not entirely random, which it is of course not, it may still not result in bias because the lateness-earliness would have to relate to people’s changing politics over time to bias the results. This may be possible, but seems not too likely.

The surveys repeatedly asked people their highest level of education and it looks like this over time: 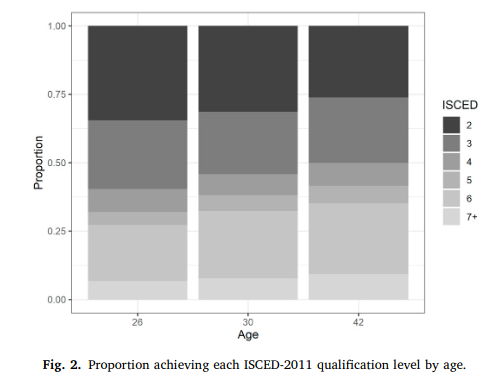 If we were naive, we could pick a survey wave (year), say the one at age 30 (in 2000), and do a regression with education level and some political measures. However, this is confounded by all the usual things. People don’t acquire maximum education levels at random, it has something to do with their stable traits. Instead, we want to compare the same person with themselves before and after going to university on the same questions about politics. Unfortunately, they didn’t actually ask the same items. The author then tried to pick some similar items to form the same scales so far as could be done. And what are those questions? His examples are: 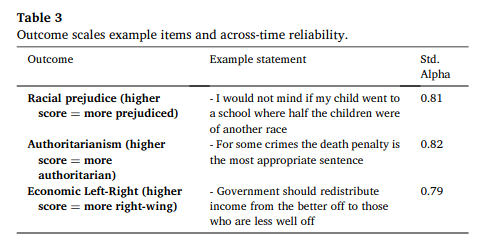 What are the other items? They are in the supplement: 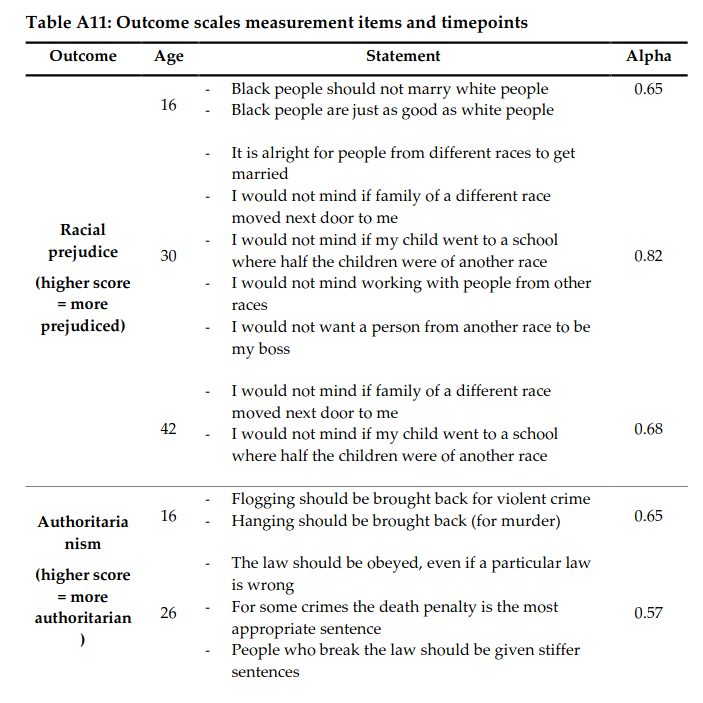 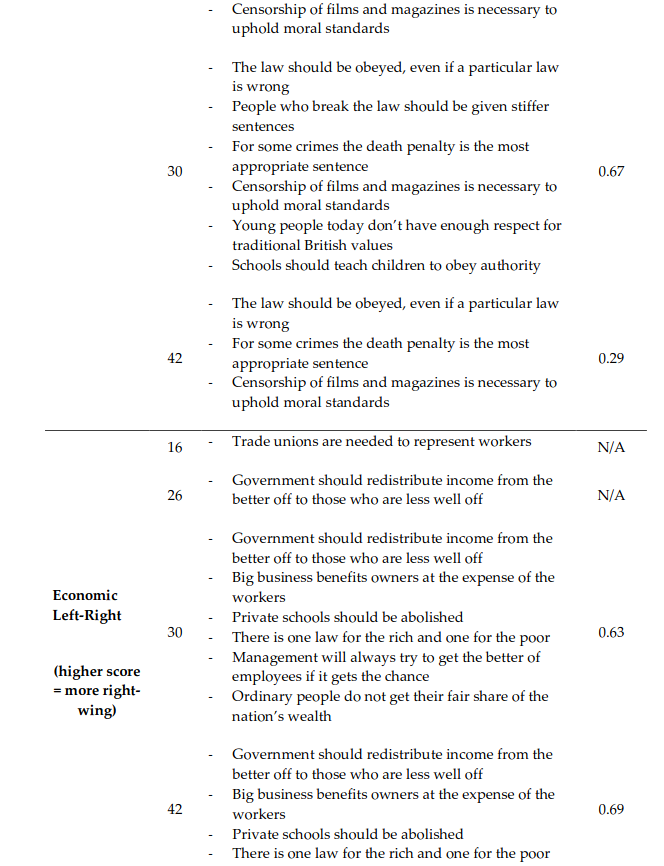 So we see that some items are measuring things neutrally e.g. would not mind a neighbor of different race, whereas others are explicitly about certain groups and has a presumed direction e.g. black people as good as white people. These items are not really measures of prejudice (literally, coming to conclusions to easily, irrationally), but that is a discussion for another post.

Here’s the results from the naive model of comparing people cross-sectionally: 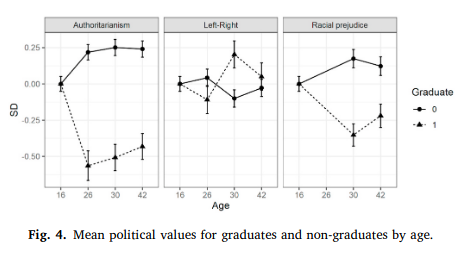 So we see quite large differences in the long-run between going to university or not. E:g., the gap for ‘authoritarianism’ (really, support for harsh punishments) is almost 0.70 d (standard deviations). The within-person estimates look like this:

They are quite a bit smaller. Now the effect for favoring harsh punishments is -0.34, about half, the one for right-wing economics is 0.17, and that for race politics is -0.16. The effects are quite reliable in terms of p values (p < .001’s and last is p < .01). This is not really the impressive indoctrination effect that one would expect. But then again, this study is based on persons born in 1970, who went to university mostly in 1990s and 2000s. Universities were much less biased back then, and definitely much less overt in their left-wing extremism than they are today. We should also not forget the measurement error issue, which is more salient here because the items differ across waves which means the scales did not measure the same trait exactly. This study cannot really show that modern universities do not produce large effects on Woke beliefs, just that those in 1990s-2000s Britain did not produce large effects aside from perhaps on opposition to harsh punishments. The finding for conservative economics is actually not new, it was also found in the older American data I covered before. This seems to show that university education paradoxically slightly protects against communistic economics views, while slightly enhancing the modern, generalized intersectionality variety. Is that due to a lot of education being the business school type? I don’t know. The largest effect is on increased opposition to harsh punishments for murder and so on. It is not so clear why that is the case, since most fields of study do not really involve much content related to that. Criminology may be far biased in favor of more lenient punishments, but very few people study criminology. Maybe universities are fostering generalized tolerance and this extends to own ethnic criminals and to somewhat lesser extent outgroup ethnics. All in all, this is a well done study that showed similar results to the other good ones I reviewed before.

Kudos to the author for posting the data and his R code. So for those interested in diving deeper, you can do that immediately.

Some simple models of US county voting outcomes

Secular genetic-phenotype paradoxes: the Flynn effect and beyond