The within-person (or intra-individual or within‐individual or …), design is a longitudinal design where we follow people over time as they change on some purported cause, and look at whether the purported effect also varies accordingly. This simple design is surprisingly underused despite having the strong advantage that it controls by design for both genetic causes (except for new mutations such as in cancers) and for stable environmental causes such as childhood upbringing or parental education levels. Since most confounding in social science is from these sources, probably, this design theoretically provides a close approximation of causality if one can study a given research question in this fashion (see prior post on using MZs for this).

Here are some interesting studies using this design. The particular strong version of this comes from the use of Nordic register studies, which use the government, complete-population data, and thus has high quality data (e.g., tax records) and guaranteed representative samples.

The proper interpretation of this is probably that changes in self-rated personality are not really much indicative of actual changes. In other words, maybe you aren’t changing all that much over time, you just think you are. Other data also support views along these lines of poor self-knowledge of personality.

Methods Participants were from the British Household Panel Survey prospective cohort study with 18 annual measurements of residential location and self-reported health outcomes between 1991 and 2009 (n=137 884 person-observations of 17 001 persons in England). Neighbourhood deprivation was assessed concurrently with health outcomes using the Index of Multiple Deprivation at the geographically detailed level of Lower Layer Super Output Areas. The main analyses were replicated in subsamples from Scotland (n=4897) and Wales (n=4442). Multilevel regression was used to separate within-individual and between-individuals associations.

Results Neighbourhood deprivation was associated with poorer self-rated health, and with higher psychological distress, functional health limitations and number of health problems. These associations were almost exclusively due to differences between different individuals rather than within-individual variations related to different neighbourhoods. By contrast, poorer health was associated with lower odds of moving to less deprived neighbourhoods among movers. The analysis was limited by the restricted within-individual variation and measurement imprecision of neighbourhood deprivation.

Lack of causal effect of neighborhoods, something also supported by data on differentially exposed siblings, see research by Amir Sariaslan.

Objective: Conclusions regarding lithium’s antisuicidal effect for bipolar disorder have been limited due to nonrepresentative subjects and potential confounding factors, including varying severity of illness. Findings regarding the effect of valproate, the most common alternative to lithium, are inconsistent for suicidal behavior. This study investigated the associations of these two drugs with the risk of suicide-related events, and possible differences between drugs, by using within-individual designs in a register-based longitudinal cohort.
Method: Through linkage of multiple Swedish national registers, 51,535 individuals with bipolar disorder were followed from 2005 to 2013 for treatment with lithium and valproate. Stratified Cox regression was used to estimate the hazard ratios of suicide-related events during treated periods compared with untreated periods. For significant associations between medication and suicide-related events, the population attributable fraction was estimated to assess the public health impact for patients with bipolar disorder.
Results: During follow-up, 10,648 suicide-related events occurred. The incidence rate was significantly decreased by 14% during lithium treatment (hazard ratio 0.86, 95% confidence interval [CI] 0.78–0.95) but not during valproate treatment (hazard ratio 1.02, 95% CI 0.89–1.15). The difference in hazard ratios of suicide-related events between lithium and valproate was statistically significant. Estimates of the population attributable fraction suggested that 12% (95% CI 4%−20%) of suicide-related events could have been avoided if patients had taken lithium during the entire follow-up.
Conclusions: The results suggest that lithium should be considered for patients with bipolar disorder with suspected suicidal intentions, although risk for suicide is only one of the considerations when providing clinical care.

Lithium appears to work as expected, though mechanism is not clear. Doesn’t necessarily make you happier, perhaps it makes you more sluggish and unable to suicide because lacking in energy.

Background Attention deficit–hyperactivity disorder (ADHD) is a common disorder that has been associated with criminal behavior in some studies. Pharmacologic treatment is available for ADHD and may reduce the risk of criminality.
Methods Using Swedish national registers, we gathered information on 25,656 patients with a diagnosis of ADHD, their pharmacologic treatment, and subsequent criminal convictions in Sweden from 2006 through 2009. We used stratified Cox regression analyses to compare the rate of criminality while the patients were receiving ADHD medication, as compared with the rate for the same patients while not receiving medication.
Results As compared with nonmedication periods, among patients receiving ADHD medication, there was a significant reduction of 32% in the criminality rate for men (adjusted hazard ratio, 0.68; 95% confidence interval [CI], 0.63 to 0.73) and 41% for women (hazard ratio, 0.59; 95% CI, 0.50 to 0.70). The rate reduction remained between 17% and 46% in sensitivity analyses among men, with factors that included different types of drugs (e.g., stimulant vs. nonstimulant) and outcomes (e.g., type of crime).
Conclusions Among patients with ADHD, rates of criminality were lower during periods when they were receiving ADHD medication. These findings raise the possibility that the use of medication reduces the risk of criminality among patients with ADHD. (Funded by the Swedish Research Council and others.)

This study identified individuals ever dispensed a selective serotonin reuptake inhibitor (SSRI) aged 15–60 years during 2006–2013, using Swedish national registers. The outcome was violent crime conviction. The main statistical analyses assessed risks of violent crime during periods on compared to off SSRI treatment within individuals. Further analyses investigated risk over time in relation to treatment initiation and discontinuation. The study identified 785,337 individuals (64.2% female), experiencing 32,203 violent crimes in 5,707,293 person-years. Between-individual analyses found statistically significantly elevated Hazard Ratios (HRs) overall (HR = 1.10), and in 15–24 and 25–34 year-olds (HR = 1.19 and 1.16), but non-significant HRs in 35–44 and 45–60-year-olds (HR = 1.02 and 1.04). In within-individual analyses, where 2.6% of SSRI users were informative, hazards were elevated overall (HR = 1.26, 95% CI = 1.19, 1.34), and across age groups (HR of 1.35 [95% CI = 1.19, 1.54] in 25–34-year-olds to 1.15 [95% CI = 0.99, 1.33] in 35–44-year-olds). In the overall cohort, the within-individual HRs were significantly elevated throughout treatment (HRs of 1.24 to 1.35) and for up to 12 weeks post-discontinuation (HRs of 1.37 and 1.20). While questions on causality remain, these results indicate that there may be an increased risk of violent crime during SSRI treatment in a small group of individuals. It may persist throughout medicated periods, across age groups, and after treatment discontinuation. Further confirmation is needed from studies with different designs, and clinical focus should be on high-risk individuals, as a majority of SSRI-users (around 97% in our cohort) will not commit violent crimes.

So, we see consistent evidence that mental medications have effects, but not always the way we prefer! A lot of mental drugs cause drowsiness, and drowsy people don’t do a lot of stuff, whether crime or suicides, so depending on what we measure, we might just be confusing that for this confound. They should do a big study with lots of medicaments and outcomes, so that one can decide between these alternative interpretations. But I digress, these kind of studies are very cool and informative. Importantly,  they provide essentially a free way (no need to gather new data) to check causality of various claimed associations.

I got repeated complaints from some anon who goes by the acronym “A.S.” that I didn’t read his paper properly, and didn’t include this one, so here we go:

The abstract is trying to hide the crucial findings, but the discussion is more clear:

Our study has 3 principal findings. First, we initially observed that neighborhood influences explained a substantially larger proportion of the violent reoffending risks in released prisoners diagnosed with or prescribed medications for psychotic disorders than in the full sample of all released prisoners (7%–14% vs 4%). However, using within-individual designs, we found that the neighborhood correlations across all subgroups were not statistically significant from zero.

Third, we observed that all three neighborhood exposure variables (median income, proportion of welfare recipients, and crime rate) independently predicted subsequent violent reoffending rates on the population level. For these associations to be consistent with a causal inference, we would have expected released prisoners to have higher rates of violent reoffending during periods when they resided in socioeconomically disadvantaged neighborhoods. However, once we had controlled for time-constant unobserved confounders, by re-examining the associations within individuals across time, there was no evidence of any statistically significant neighborhood effects. In other words, we found that the violent reoffending rates were constant regardless of where the released prisoners lived throughout the study period, so the neighborhood effects (if any) were likely minimal at best. Sensitivity analyses demonstrated that these findings were robust when using alternative exposure variables (disposable income and welfare recipiency) and could not be attributed to either confounding by gender, ethnicity, and neighborhood population size, duration effects, or the lack of variation in the exposure variables across time. 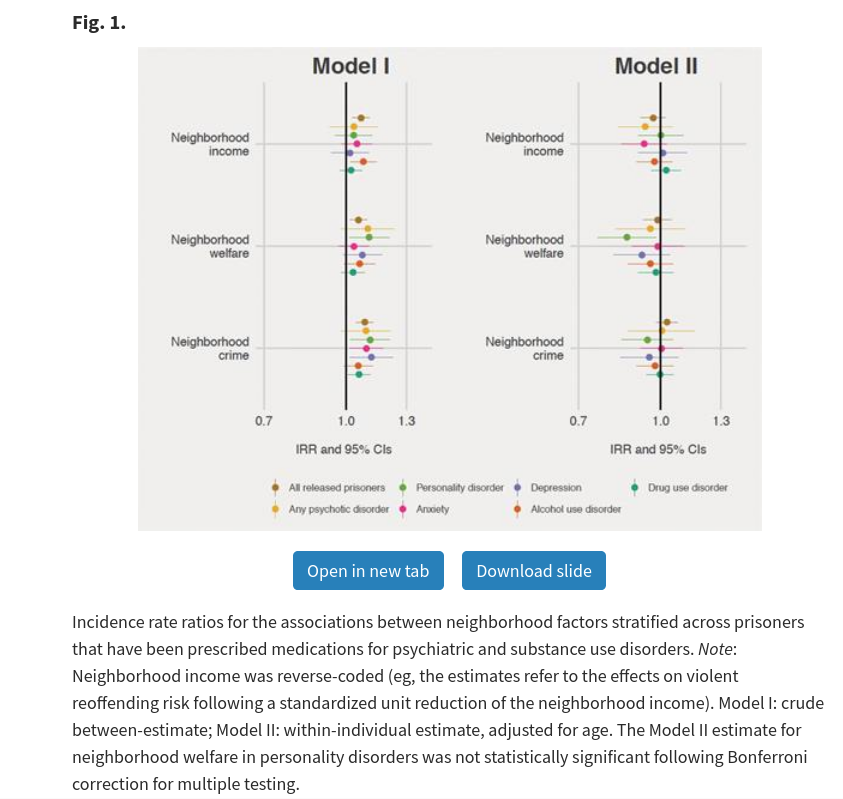