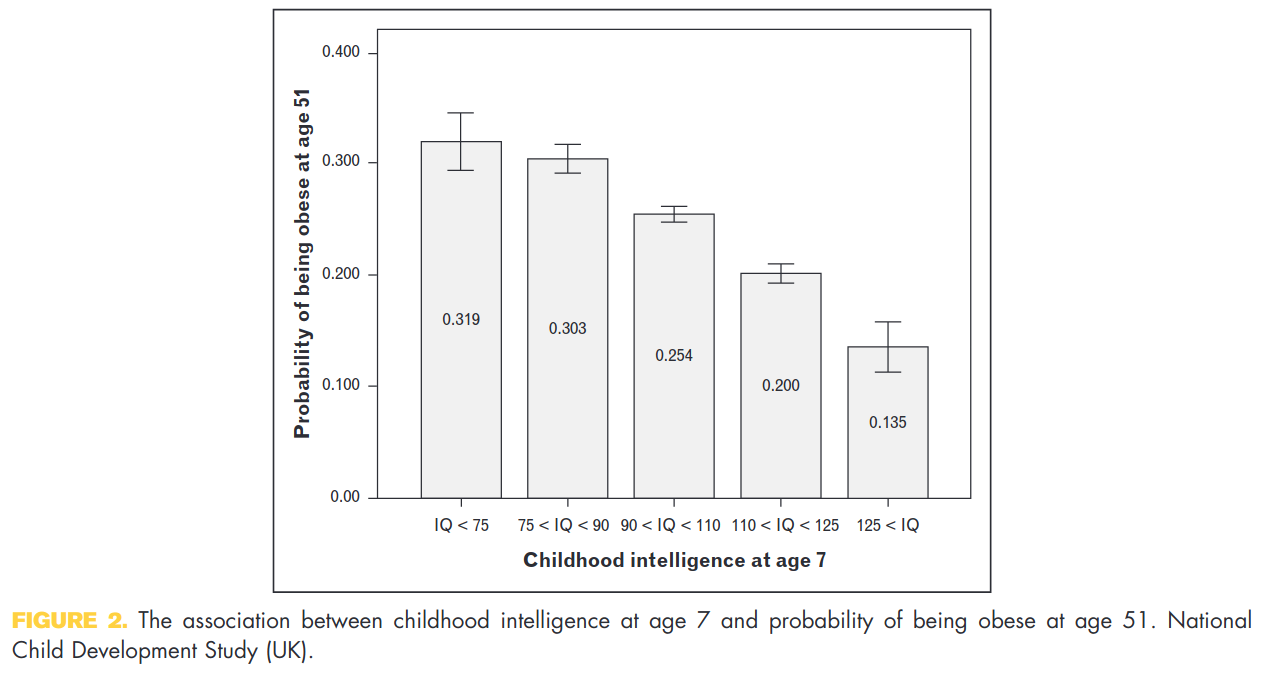 There’s a stereotype that fat people are lazy, less intelligent, and of course, they are widely considered unattractive in the west in modern times. But is this stereotype true? Well, laziness is a bit tricky to measure, as self-report cannot be trusted that much, but intelligence we can measure. So what does the science say?

First, the stereotypes. You can find a lot of papers on this stereotype, mostly by academics who are so very, very concerned. Here’s a paper about about how research on intelligence and obesity harms “people in bigger bodies”, and here’s a study just showing the stereotype to be real but weak (r = -.17). Here’s a paper showing that even by other children, they were considered “more dislikable, lazy, less intelligent, unalluring and less considerable as playmates”. There’s even a paper here showing that you can induce stereotype threat to obese people to make their intelligence scores lower (p = .03 for the interaction, of course).

So what about the facts? Well, the same paper above found a correlation of -.26 between working memory and BMI. But we can do better. Apparently, a lot of doctors have been trying to claim reverse causality, i.e., that low intelligence does not make you somewhat likely to become obese, rather obesity makes your intelligence lower! I swear academics are experts in implausible reverse causality theories. Fortunately, Kanazawa carried out a literature review of longitudinal studies where intelligence was measured in childhood and obesity in adulthood, and the correlation was still found. Looks like this for mean BMI: 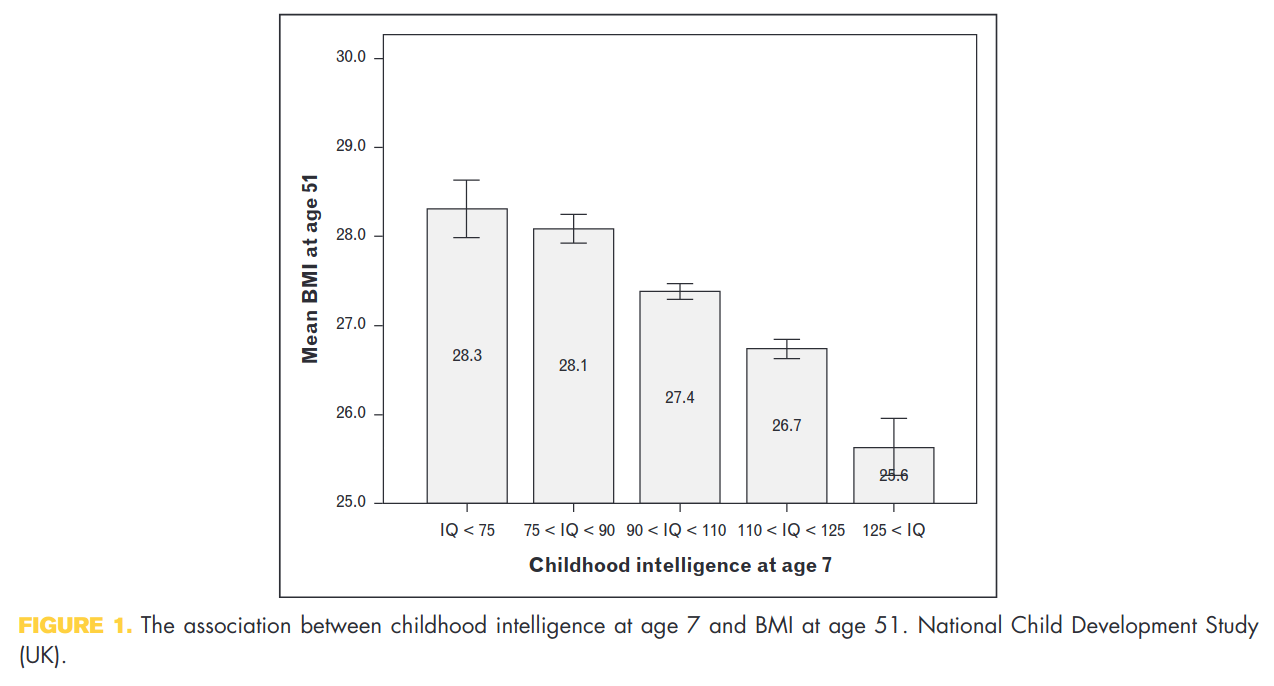 And for probability of obesity:

The details are in his earlier 2013 paper. Here’s the regression table: 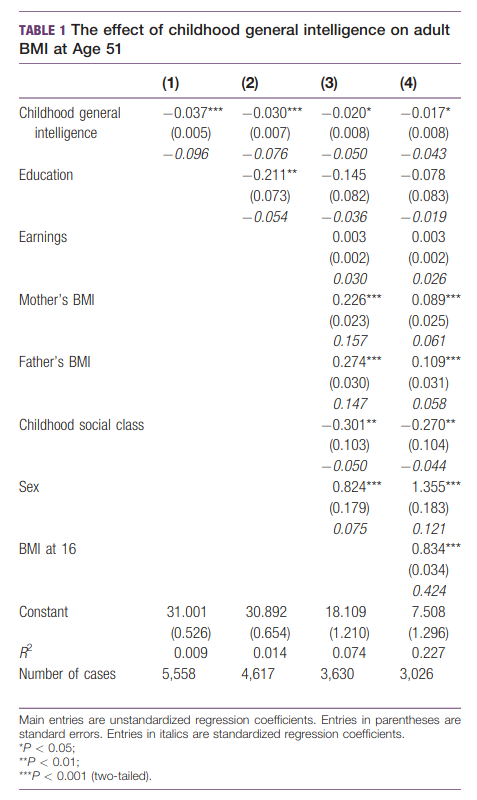 Based on this, we might think the relationship is pretty likely to be causal. I mean, after all, if you have already controlled for parental BMI, education, earning, sex, and even BMI at age 16, then it’s hard to think of a plausible confounder that remains. To be fair, the relationship is weak. Without controls it is a mere 0.10 standardized beta, and with all the controls it is 0.04 (p < .05).

Because we are not lazy, I looked at another dataset. Here’s the relationship between intelligence measured at age 20 in 4500 American veterans and their BMI at age 38 (Vietnam Experience Study public dataset): 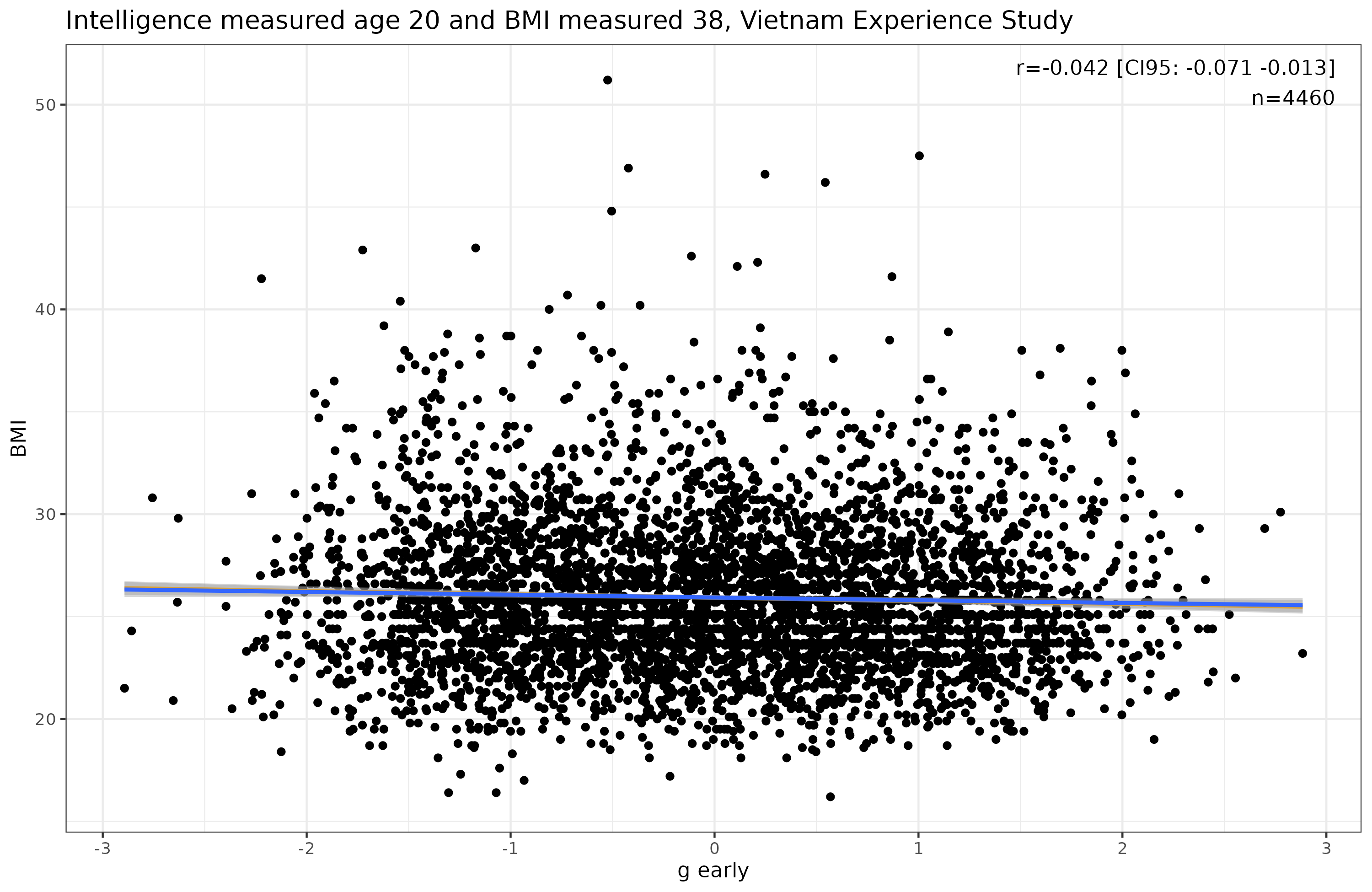 The relationship is again not impressive but it is there. For those wondering about the most obvious potential confounders: 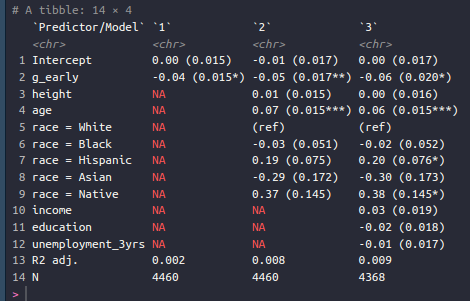 Finally, if the relationship is causal, then it should hold in a sibling analysis too. And we love sibling analyses on this blog. I found one such study:

Background Body mass index (BMI) and obesity rates have increased sharply since the 1980s. While multiple epidemiologic studies have found higher adolescent cognitive ability is associated with lower adult BMI, residual and unobserved confounding due to family background may explain these associations. We used a sibling design to test this association accounting for confounding factors shared within households.

Methods We used data from four cohort studies: the National Longitudinal Study of Youth 1979 (NLSY-79), the NLSY-79 Children and Young Adult, the NLSY 1997 (NLSY-97) and the Wisconsin Longitudinal Study (WLS); a total of 12,250 siblings from 5,602 households. We used random effects within-between (REWB) and residualized quantile regression (RQR) models to compare between- and within-family estimates of the association between adolescent cognitive ability and adult BMI (20-64 years).

Results In REWB models, moving from 0th to 100th percentile of adolescent cognitive ability was associated with −1.89 kg/m2 (95% CI = −2.41, −1.37) lower BMI between families. Adjusting for family socioeconomic position reduced the association to −1.23 (−1.79, −0.66) points. However, within families the association was just −0.13 (−0.70, 0.45) points. This pattern of results was found across multiple specifications, including analyses conducted in separate cohorts, models examining age-differences in association, and in RQR models examining the association across the distribution of BMI.

They aggregated a bunch of datasets with intelligence and BMI, and they find that the relationship ‘goes away’ within families! Well, at least the p value is > .05. So it is causal or not? Here we must be causal not to fall pray to the lower precision fallacy commonly seen in family studies. Note that the sibling effect size was estimated between “−0.13 (−0.70, 0.45)”, so their data includes in the 95% confidence interval a negative value up to -0.70, which does in fact slightly overlap with their regression result with controls for family SES “−1.23 (−1.79, −0.66)”. As such, they haven’t proven the relationship is entirely spurious, but it is not likely so large. Unfortunately, despite using 12k sibling they still don’t have enough precision to say for sure. As always, the way forward here is to get more data. For some reason they didn’t use the Add Health dataset (also public), or UK Biobank (not public), though both have BMI and intelligence measures. The UK Biobank alone has 20k sibling pairs, so it would make a substantial improvement to this analysis.

Setting aside the issue of causality, it is nevertheless true that the stereotype is confirmed by the existing research insofar as intelligence is concerned. But before you go out and act on this belief, note what happened to fellow high decoupler Geoffrey Miller who wrote this tweet in 2013: 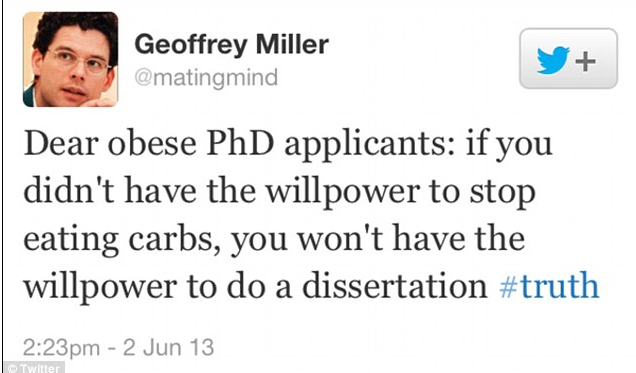 That he shouldn’t have done! You can guess what happened, but here’s some headlines: The Fat-Shaming Professor: A Twitter-Fueled Firestorm, Fat-Shaming in Academe, How Twitter Schooled an NYU Professor About Fat-Shaming. His punishment was the usual sort of thing: University of New Mexico censures Geoffrey Miller, a psychology professor, for his infamous fat-shaming tweet. He will be barred from admissions decisions and must undergo sensitivity training. So, keep your belief to yourself, but still assign fat applicants a weak lower prior for competence. This is what one has to do when discrimination based on objectively true criteria is forbidden, and it’s just as true whether that is race, sex, sexual orientation, height, or what have you. But before you go too crazy, remember that a correlation of maybe 0.10 is not much of a good prior. It’s basically a decider in case you have two otherwise equal candidates.