Using data from Copenhagen school registers and other sources, I test the hypothesis that

of immigrant pupils. The results suggest that, when a rich set of covariates at student,

school, and neighbourhood levels is controlled for, up to an immigrant concentration of

about 35 per cent in the local school, opting out decisions of Danes are not affected.

But, Danes are far more likely to opt out as soon as the concentration exceeds 35 per cent.

However, only the 20 per cent of the immigrant population who speak Danish at home

respond to higher immigrant concentrations by opting out. These results lend support

schools is increased by Danes’ and immigrants’ differing behaviour.

This study examines whether a high concentration of schoolchildren of non-Western origin is a factor behind the decision to opt out of local public schools in Copenhagen, Denmark. 1 In the past 15 years, Copenhagen has experienced a substantial increase in schoolchildren with an immigrant back- ground (from 16 per cent to almost 30 per cent), and major changes in their regions of origin. A recent study (Rangvid, 2007a) examines the extent and patterns of ethnic segregation across schools in Copenhagen. This study takes the previous analysis a step further by considering a possible factor behind families’ choice of school: the percentage of immigrant children in the school. I ask whether the decision to opt out of the local public school is related to the concentration of immigrant pupils in that school, and if so, whether there is evidence of a threshold or ‘tipping point’ in response to the percentage of immigrant pupils (e.g. Clotfelter, 1976) after which families start opting for alternatives to the local school.

Crazy. Remember that the ethnicity of school children (in public schools) give an estimate of the future ethnicity of the city as a whole. And this study is from 2009, 4 years ago. Who knows what the current numbers are. Sad to see this happen to Copenhagen. :(

Despite a growing literature on the influence of the concentration of ethnic minorities in schools on white flight, there seems to be no consensus in the literature on whether ‘white flight’ actually exists (Lankford and Wyckoff, 1992; Lankford, Lee and Wyckoff, 1995; Lankford and Wyckoff, 1997; Buddin, Cordes and Kirby, 1998; Figlio and Stone, 2001). Most of the white flight literature is concerned with the choice between public and private alternatives (e.g. Lankford, Lee and Wyckoff, 1995; Betts and Fairlie, 2003; Campbell, West and Peterson, 2005; Brunner, Imazeki and Ross, 2006), which is probably due to the fact that public school choice is restricted in the United States. However, in school systems with more choice, the decision of native children to opt out from local public schools with many immigrants into other public schools with fewer immigrants poses an additional, potentially serious, threat to integration at school. Thus, the impact of segregation not only stems from the choice of private school, but also that of public school. To my knowledge, there are no studies on the joint impact of high immigrant concentration in the local school on opting out in favour of private or other public schools.

It seems very odd to deny white flight. Part of the general mantra of denying problems with low-g immigrants or rationally justified disbelief?

Since the existing literature focuses on the US experience, the main issue there is white flight from minorities (one exception is Betts and Fairlie, 2003). However, for most European countries, the related issue of native flight from immigrant schoolchildren is probably more relevant. To my knowledge, there is no European study on native flight from schools with high immigrant levels. While many considerations are similar to the white flight perspective, additional considerations include the effects of immigrant school- children on school resources and teaching methods due to their limited language proficiency. As Betts and Fairlie suggest, a substantial increase in a school of children with limited proficiency in the language of the host country can take away teaching resources from native children, due to such factors as a need for special classes for pupils with limited language skills. Alternatively, if immigrant children are in regular classes, teachers may decide to spend additional time helping them at the expense of other pupils in the class. A recent study of Copenhagen schools suggests that high numbers of immigrants in schools are related to lower test scores for native Danes and immigrants alike (Rangvid, 2006).

Or the native danes living among immigrants are lower than average g. This would be expected since the highest g natives would have the most money and thus an easier time moving to a safer, whiter area.

The Copenhagen school system has a number of features that make it an interesting case for analysis. First, even though in principle a formal mechanism assigns children to specific public schools based on residence in the school catchment area, parents can apply for admission to other public schools or to about eighty private schools. In practice, 52 per cent of all children do not attend their local public school: 26 per cent attend an alternative public school, while the remaining 26 per cent attend private schools. Thus, while a great deal of attention in the literature is typically focused on the choice of a private school, the choice between public schools is equally important in Copenhagen. Secondly, in many previous analyses of school choice, only a few children in the district have typically been affected. In Copenhagen, however, more than half the school population is involved in some form of school choice. Thirdly, because immi- grant and disadvantaged children are over-represented in Copenhagen, I was able to explore the impact of choice within an environment about which there is heightened concern.

Quite high numbers there for private schools.

To test the ‘native flight’ hypothesis, I use reduced- form equations to estimate the probability of opting out. The main objective of this study is to investigate the role played by the concentration of immigrants at school on opting out. However, this raises the question of whether it is ethnicity per se that is driving families away, since it is a well-established fact that ethnicity is correlated with a number of other characteristics that may also factor into the decisions of families, most notably socio-economic background and the academic standards of the school. Therefore, I include two additional measures in the regressions: (i) a measure of the pupils’ average socio-economic status and (ii) a measure of average achievement. Principal component analysis is used to create a con- tinuous SES index (Filmer and Pritchett, 2001) using fathers’ and mothers’ level of education and income. The first principal component accounts for 50 per cent of the variance in the set of four variables and is used to derive weights for the SES index. The highest weights were given to mother’s and father’s level of education (0.55 and 0.53), while mother’s and father’s income were given slightly lower weights (0.46 and 0.44). For the second measure, the average marks in written Danish and maths tests from the national school leaving exams after the ninth year of education (15–16-year-olds) in the 4 years 2000–2003 (summer) are used. These are the years before our point of data (2003, autumn). 10

When a set of dummies indicating whether at least one parent has an upper secondary or tertiary educa- tion is interacted with the number of immigrants at the local school (with both parents having only lower secondary education as the reference category), the results suggest that, among Danish pupils, those with medium and well-educated parents respond more strongly to increases in the immigrant percentage in the local school than those with poorly educated parents (since the interaction effects are both sig- nificantly different from zero; Table 2, upper panel). For immigrants, only families with well-educated parents show a stronger response to rising immigrant percentages when compared to those with poorly- educated parents (the reference category), while medium educated families do not. A test of the sum of the coefficients of the main effect (0.004) and the interaction effect for well-educated parents (0.019) shows that the effect of increasing immigrant percen- tages on opting out probabilities is weakly different from zero for well-educated immigrants (with a p-value of 0.09). Thus, Danes, no matter whether they come from poorly, medium or well-educated homes are responsive to the percentage of immigrants in their local school, but medium and well-educated families respond much more strongly than poorly educated families. Among immigrants, only the well- educated show evidence of similar behaviour, but the strength of their response and the statistical signifi- cance of the estimated coefficient is much weaker than that of Danes.

Seems to fit perfectly with my alternative hypothesis above.

To sum up, for Danes of any educational family background, opting out is a response to the number of immigrants at the local school, but better educated families are more likely to opt out. For immigrants, it is the language dimension which divides them into two groups in their opting out behaviour: those who speak Danish at home tend to opt out from schools with many immigrant pupils, while children who speak another language than Danish at home are not responsive to the composition of the school. To conclude, the subsample analysis reveals that not only does opting out increase ethnic segregation, but also increases segregation between students with well and poorly educated parents (mostly in the case of Danes) and between more and less language-proficient immigrants.

The language proficieny of the immigrants is probably also g loaded to some extent. Smarter immigrants would learn the language faster.

In the following, I investigate question 4, i.e. is there a threshold above which students start to opt out as a response to increasing immigrant shares? To shed light on this, instead of entering the immigrant percentage as a continuous variable as in the previous section, I create a set of indicator variables (0–10 per cent, 10–15 per cent, 15–20 per cent, … ,475 per cent) with ‘0–10 per cent’ immigrants being the reference category. Figure 1 illustrates the coefficient estimates of the set of indicators from separate estimations for Danes and immigrants (see also Table A2). The pattern for Danes in the upper panel of Figure 1 suggests that there are three distinct zones: up to an immi- grant percentage of around 35, there is generally no significant difference in opting out compared to the reference group of schools with no or only very few immigrants (0–10 per cent). For immigrant concentra- tions above 35 per cent, opting out is far more likely and significantly different from the reference group. Yet, while at a higher level than before, opting out does not seem to increase over the 35–55 per cent range. Thereafter, opting out stabilizes at even higher levels. The size of the effect is substantial: for immigrant levels between 35–55 per cent, the prob- ability of opting out increases by 0.30–0.45 compared to the reference category; and for even higher levels, the increase is between 0.50 and 0.55. These results show that Danes respond to higher immigrant levels in schools when more than one out of three pupils in the school are immigrants.

The figure she is talking about is this one: 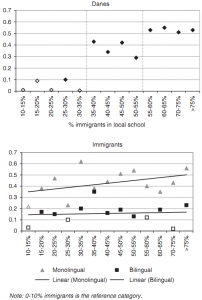 I note that for some reason she didn’t insert regression lines for the Danish sample, but did for the immigrant sample. It makes little sense. Neither did she test for significance between 30-35 and 35-40 categories. Perhaps it’s just a statistical fluke, and not a real threshold. A replication of the study would show which hypothesis is true.

There are some more numbers in the back of the paper, hidden away sort of. Though I’m still unsure about the threshold hypothesis. I will contact the author to see if she was updated numbers.

Cognitive ability and tattoos and piercings