Nature has a review of Robert Plomin’s new book by some random lefty historian data-free reasoning type called Nathaniel Comfort (he follows the usual pattern of having a background in biology, as the usual suspects). Among the usual claims without any supporting references we find this one:

Crude hereditarianism often re-emerges after major advances in biological knowledge: Darwinism begat eugenics; Mendelism begat worse eugenics. The flowering of medical genetics in the 1950s led to the notorious, now-debunked idea that men with an extra Y chromosome (XYY genotype) were prone to violence. Hereditarian books such as Charles Murray and Richard Herrnstein’s The Bell Curve (1994) and Nicholas Wade’s 2014 A Troublesome Inheritance (see N. Comfort Nature513, 306–307; 2014) exploited their respective scientific and cultural moments, leveraging the cultural authority of science to advance a discredited, undemocratic agenda. Although Blueprint is cut from different ideological cloth, the consequences could be just as grave.

Our prior for this claim being wrong is strong because we know that large structural abnormalities including whole chromosome aneuploidies are usually associated with a lot of issues, including behavioral ones — many of which would be criminal if we held such people accountable. This is probably in part due to the link to lower intelligence. In any case, we can easily check the claim in the academic literature since people compile datasets about persons with large genetic abnormalities.

Objective To investigate the criminal pattern in men between 15 and 70 years of age diagnosed with 47,XXY (Klinefelter’s syndrome (KS)) or 47,XYY compared to the general population.

Design Register-based cohort study comparing the incidence of convictions among men with KS and with 47,XYY with age- and calendar-matched samples of the general population. Crime was classified into eight types (sexual abuse, homicide, burglary, violence, traffic, drug-related, arson and ‘others’).

Conclusion The overall risk of conviction (excluding traffic offenses) was moderately increased in men with 47,XYY or KS; however, it was similar to controls when adjusting for socioeconomic parameters. Convictions for sexual abuse, burglary, arson and ‘others’ were significantly increased. The increased risk of convictions may be partly or fully explained by the poor socioeconomic conditions related to the chromosome aberrations.

This is more or less a perfect study for this purpose, the Everest regression of the authors notwithstanding.

Method A bibliographic search identified English‐language articles on SCTs. The focus was on studies unbiased by clinical referral, with power of at least 0.69 to detect an effect size of 1.0.

Interpretation Individuals with SCTs are at risk of cognitive and behavioural difficulties. However, the evidence base is slender, and further research is needed to ascertain the nature, severity, and causes of these difficulties in unselected samples. 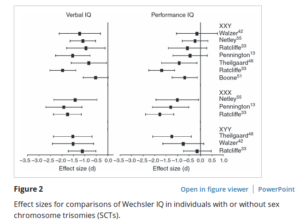 So, we know from the study above that crime rates are in fact higher. Do we also see the usual other types of problem behavior and related cognitive issues that would explain this? Yep, IQ scores are 10-15 points below comparison groups. Note that the authors’ discussion of the IQ gaps show a lack of understanding of the role of the Flynn effects since they keep remarking how the IQ means of affected groups are around 100 while matched comparisons are around 110-115 (failure to realize the need for renorming). This error was also seen in the Minnesota Transracial Adoption Study and was pointed out by Loehlin.

By now the reader might be wondering: maybe the historian’s view is based on something that was published before 2010? What does the older reviews say? Well, they say about the same thing.

It is possible that boys with the XYY syndrome are ill-equipped to cope with the ordinary stresses of learning and the academic environ- ment; 19 of the 35 patients are recorded as having had problems in school, and only 4 as having been free of problems. In five cases, the problems were specified as behavioral, in four as underachievement, and in ten as both. Behavioral problems included dislike of school, deficient attention span, restlessness, truancy and disruption of the classroom routine. In at least one case, behavior was so bizarre as to resemble both brain-damage symptoms and psychosis. This latter case is instructive because the boy’s behavior improved remarkably by the middle teenage years, under the influence of a planned, benign en- vironment. Simultaneously, there was an improvement of the abnormal, spike-wave EEG (there had been no clinical seizures), the spike being no longer in evidence. Also the IQ rose from a 6 2 year old low of 89, to 100 in teenage.

School difficulties did not especially correlate with IQ. They oc- curred over an IQ range from 63 to 125. The IQ was given in 18 cases, the median being 91, and the mean 89. The exact nature of the rela- tionship of the extra Y chromosome to IQ will remain uncertain until incidence studies have been completed. So far, there does not appear to be an excess of severe mental retardation, as in the XXY syndrome (though note that some individuals with XXY do have superior IQ’s above 120).

Unstable work histories closely relate to prison histories, so far as the 30 men over the age of 16 in the present series are concerned, for some of them were in and out of jail two or more times. Some were in special institutions for men considered to be poor risks as chronic offenders. One had been in both a jail and a mental hospital.

The present sample includes 24 men with a prison record; 2 others were in hospitals for the criminally insane and 1 was in a regular psychiatric hospital because of sex offenses. These total 27 in detention. There were three children, one of whom at age eight had been in trouble with the law. The other two and one of the teenagers had exhibited grossly deviant behavior. In only one case (an adult) was the necessary information lacking. In the whole sample, therefore, there were three, one teenager and two men whose behavior was relatively normal and law abiding.

The sample is, of course, deliberately biased in favor of law breakers, for investigators were, by design, screening tall men in jails, in the belief that there would be more XYY men among them than elsewhere. Thus, the exact relationship between XYY and imprisonment also cannot be ascertained until proper incidence studies have been completed.

The offenses that kept men in detention varied from robbery to murder (3 cases). In 7 cases crimes against both property and person were specified (in another 7, attacks on property and person were noted, though not in connection with detention). In 11 cases, the subjects were imprisoned for an offense against property only, and in 7 others, for an offense against persons only, 5 of them sex offenses. It should be noted that in the sum total of sex offenses, both homosexual and heterosexual assaults and/or approaches were represented

The history seems to be that prison workers discovered suspiciously high numbers of XXY and XYY men among high profile criminals. They not unreasonably then inferred that this had something to do with their predicament (essentially a case-control study). When data later became available for larger samples, the relationship between these disorders and problem behavior was confirmed. Somewhere along the way, some accounts presumably exaggerated the relationships which cause historians sensitive to social justice to produce counter-narratives which apparently they still believe in to this day despite the actual data.