I have been repeatedly asked about this topic, so here is a post that covers the basics. The argument goes like this:

Given what we know about race, intelligence, and job performance, the conclusion is essentially inevitable. However, as far as I know, no one has actually published a study on malpractice rates by race, or some other direct measure of patient harm. You can probably imagine why that is the case. However, we do have a case study of a similar thing happening in the police (Gottfredson, 1996).

But let’s take things one step at a time.

Ample data exists about this. Mark Perry has documented it well:

The MCAT (Medical College Admission Test) is a cognitive test used for medical schools, basically their version of the SAT/ACT. I don’t know if anyone has published a study relating this one directly to an IQ test, but we have such data for the other achievement/entrance tests: SAT, ACT, and KTEA.

The table shows that someone with about the same score in the highlighted column has ~22.5% chance of admittance if Asian, and 81% if black. One can also fit a model, and calculate the specific race benefits in odds ratios, as was done in this report:

The table below shows acceptance and matriculation (people who actually enroll) rates by race (source):

So we see that blacks and hispanics have lower acceptance/matriculation rates. This is because while they gain from affirmative action, they are also worse applicants, and worse than the favoritism granted by affirmative action.

Tables below show average competencies by race for applicants and matriculates (same source as above):

Unhelpfully, no standard deviations are supplied for these measures, so one cannot just glance the Cohen’s d values from the table. These can be found in the table below (source): 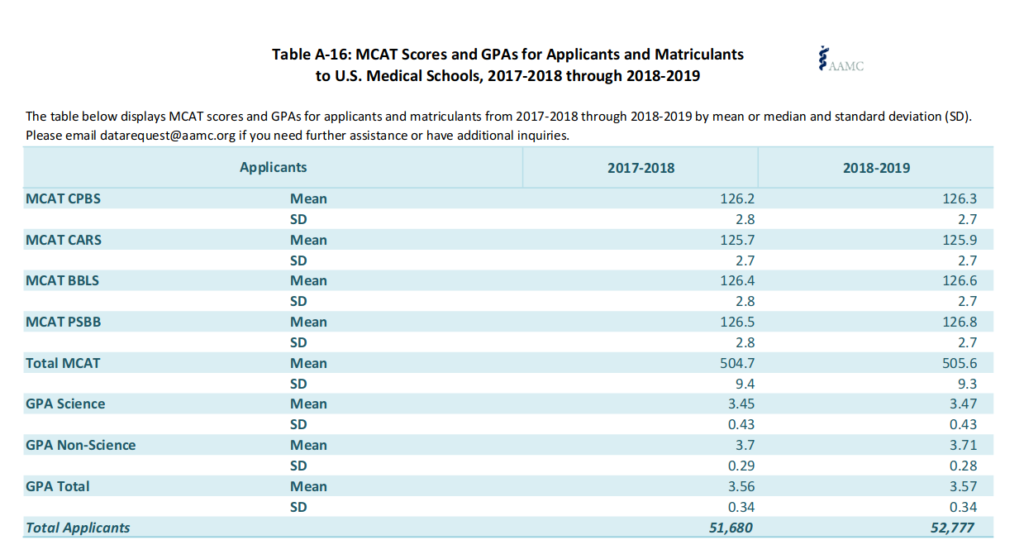 These are for the total population of applicants, not whites alone, so the Cohen’s d will be slightly underestimated by using these (say, 10 to 15%). So, then we calculate the d gaps by race to white (I used matriculates, as is most relevant), which are:

Thus, we see that black and Hispanic enrolled students are quite far below whites in academic talent, and Asians somewhat above.

Less capable students drop out more, so this tends to even out group gaps among admitted students. However, the process is not 100% effective, so we still end up with gaps among the graduates. The figure and table below show the differential drop-out (source): 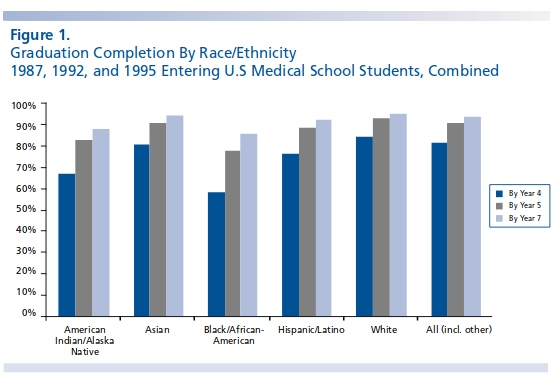 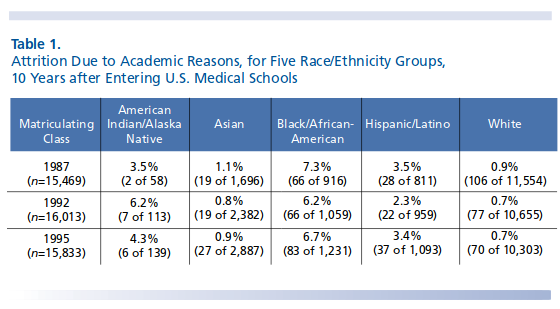 Finding competence data for graduates was more tricky, but I was able to find this figure (source): 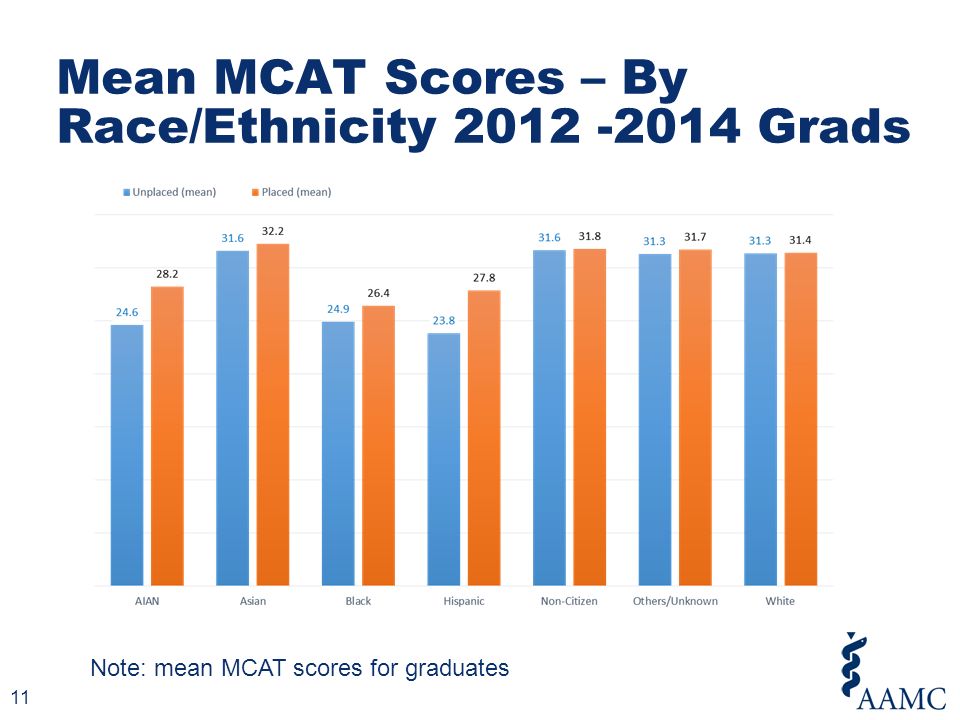 Thus, we see that the rank order of scores among different races is preserved among graduates as well. The placed/unplaced refers to whether the graduates were able to find a residency.

Instead of relying on more academically broad MCAT, we can look at various medical school tests and exams (which are of course well predicted by the MCAT). First table is from here and concerns a competency test taken at medical school. 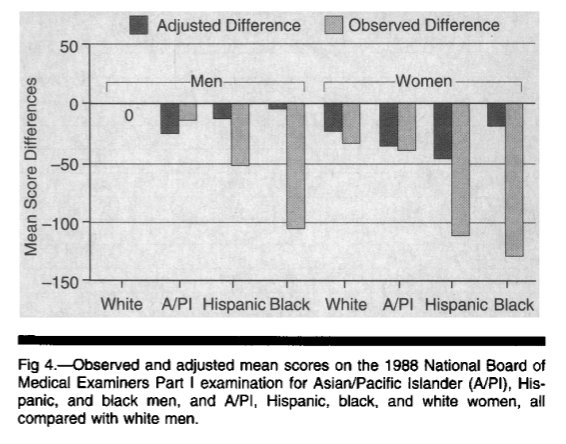 The adjusted score refers to the explained gaps after controlling for prior MCAT score and GPA. Women do worse in these old data, as they generally do on high stakes testing.

From the same Michigan report as above, we get a similar result: 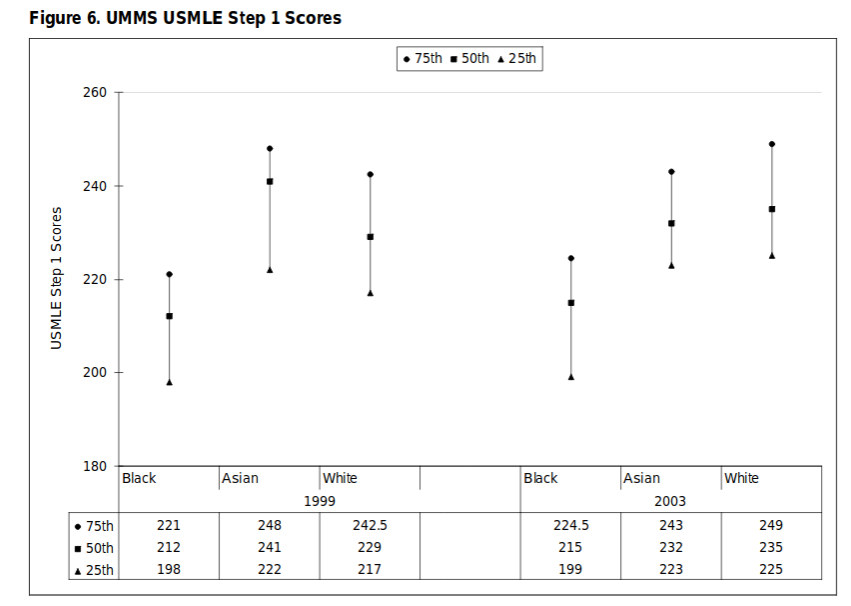 The 75th centile black student in medical school do about as well as the 25th centile white and Asian student.

There are a variety of studies on this question, and a few reviews (e.g. here, here). Here’s an example of a primary study:

To establish whether successful certifying examination performances of doctors are associated with their patients’ mortality and length of stay following acute myocardial infarction.

Data on all acute myocardial infarctions in Pennsylvania for the calendar year 1993 were collected by the Pennsylvania Health Care Cost Containment Council. These data were combined with physician information from the database of the American Board of Internal Medicine.

Holding all variables constant, successful examination performance (i.e. certification in internal medicine or cardiology) was associated with a 19% reduction in mortality. Decreased mortality was also correlated with treatment in hospitals located outwith either rural or urban settings and with management by a cardiologist. Shorter stays were not related to examination performance but were associated with treatment by high volume cardiologists who had recently finished training and who cared for their patients in hospitals located outwith rural or urban settings.

The results of the study add to the evidence supporting the validity of the certifying examination and lend support to the concept that fund of knowledge is related to quality of practice.

There are well-known race difference in job performance in general

Thus, finally, we get to the last part. Unfortunately, I have not been able to find a study that looked at individual doctor’s race and malpractice and other patient harms measures. One can however use the race composition of medical schools as a proxy. There is a study of medical schools showing they have consistently different rates, but it didn’t investigate the link to school level metrics such as mean MCAT/GPA among students.

Objectives: Following earlier research which showed that certain types of physicians are more likely to be sued for malpractice, this study explored (1) whether graduates of certain medical schools have consistently higher rates of lawsuits against them, (2) if the rates of lawsuits against physicians are associated with their school of graduation, and (3) whether the characteristics of the medical school explain any differences found.

Study subjects: All US medical schools with at least 5% of graduates practising in three study states (n=89).

Main outcome measures: Proportion of graduates from a medical school for a particular decade sued for medical malpractice between 1990 and 1997 and odds ratio for lawsuits against physicians from high and low outlier schools; correlations between the lawsuit rates of successive cohorts of graduates of specific medical schools.

Results: Medical schools that are outliers for malpractice lawsuits against their graduates in one decade are likely to retain their outlier status in the subsequent decade. In addition, outlier status of a physician’s medical school in the decade before his or her graduation is predictive of that physician’s malpractice claims experience (p<0.01). All correlations of cohorts were relatively high and all were statistically significant at p<0.001. Comparison of outlier and non-outlier schools showed that some differences exist in school ownership (p<0.05), years since established (p<0.05), and mean number of residents and fellows (p<0.01).

Of particular interest here is the mentioned database, AMA Masterfile. Perhaps one can obtain access to this.

Worse, one can find studies that investigate the effect of race on patient outcomes — but only the patient’s race and sometimes the interaction of the patient with the doctor, without reporting the doctor’s race main effect! Here’s an example:

Objective To describe how the race/ethnicity and gender of patients and physicians are associated with physicians’ participatory decision-making (PDM) styles.

Design, Setting, and Participants Telephone survey conducted between November 1996 and June 1998 of 1816 adults aged 18 to 65 years (mean age, 41 years) who had recently attended 1 of 32 primary care practices associated with a large mixed-model managed care organization in an urban setting. Sixty-six percent of patients surveyed were female, 43% were white, and 45% were African American. The physician sample (n=64) was 63% male, with 56% white, and 25% African American.

Conclusions Our data suggest that African American patients rate their visits with physicians as less participatory than whites. However, patients seeing physicians of their own race rate their physicians’ decision-making styles as more participatory. Improving cross-cultural communication between primary care physicians and patients and providing patients with access to a diverse group of physicians may lead to more patient involvement in care, higher levels of patient satisfaction, and better health outcomes.

Note the use of “race-concordant”, which means patient and doctor had the same race. This is in fact a simple coding of the interaction effect between patient and physician race.

Bonus: really nice p-values in those findings. No worries, the study only has ~1900 citations.

Oh, and final point. From a public health perspective, affirmative action probably mostly kills blacks and Hispanics. People prefer to befriend and date others who are the same race, and this ethno-centrism also applies to patient’s choice of physicians. As such, the incompetent black and Hispanic physicians are mostly treating and thus harming black and Hispanic patients, who would have been better off with a white or Asian doctor. 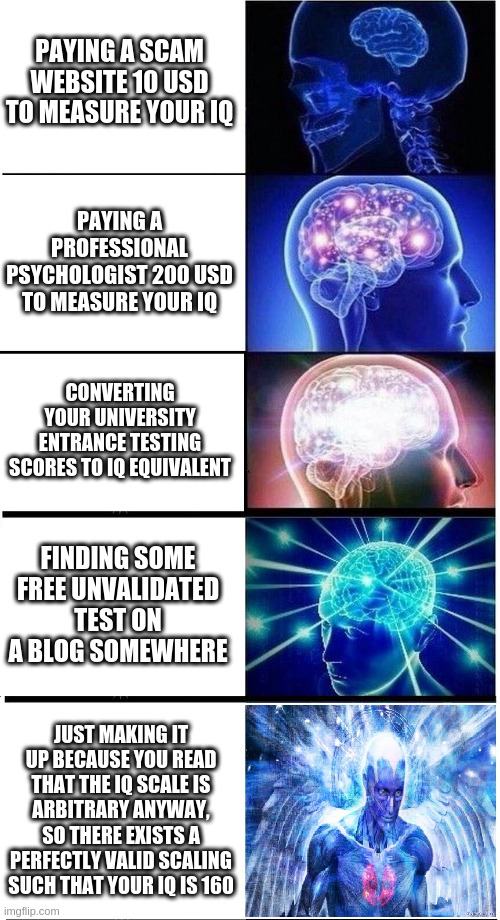