I was asked about survey data by various kinds of experts on race and intelligence. Happy to oblige, of course.

Sean Last has already reviewed some of these last year, I quote from him:

The most recent survey of intelligence researchers comes from Rindermann, Becker, and Coyle (2020) who emailed 1237 researchers who had either published intelligence related work in an academic journal or who were a member of an organization related to the study of individual differences in intelligence. Rindermann et al. asked participants what portion of the Black-White IQ gap they thought was due to genes. Of the 1237 people emailed, 265, or 20%, responded.

The response rate of Rinderman et al.’s survey, 20%, is somewhat low. It could be that the people who did not answer the survey would have responded in the same way who as those who did, but it is also possible that there was a systematic difference between those who chose to respond and those who chose not to.

It seems likely to me that if a difference existed it would bias the results in favor of environmentalism. This is just speculation, but the most obvious answer-related reason I can think of for not answering this survey is the politically incorrect nature of saying that genes are involved in the black-white IQ gap.

That being said, I wouldn’t be surprised if these results are reasonably unbiased since researcher’s names were not released with their responses.

Prior to Rindermann, the last survey of intelligence experts was Snyderman and Roth (1987) who mailed 1,020 academic psychologists, sociologists, and behavioral geneticists, asking them, among other things, whether the Black-White IQ gap was due to the environment, genetics, or both.

Of those mailed, 661 responded to the survey, giving it a response rate of 65%. In total, 45% of respondents said the Black-White IQ gap was due to genes and the environment, 24% said there wasn’t enough data to say, 17% didn’t respond, 15% said it was due only to the environment, and 1% said that it was due entirely to genes.

Synderman and Roth’s primary weakness is the vagueness of their question. Ideally, they would have asked participants to name the exact proportion of the Black-White IQ gap they thought was due to genes. However, they had a much higher response rate than Rindermann et al did. Taken together, these surveys provide reasonably strong evidence that most experts reject the view that the environment explains all of the black-white IQ gap.

Prior to Synderman and Roth, the most recent survey I am aware of is Friedrichs (1973) who, in 1970, surveyed 526 members of the American Psychological Association, asking them to rate their agreement with the following statement from the IQ researcher Arthur Jensen: “It is a not unreasonable hypothesis that genetic factors are strongly implicated in the average Negro-white intelligence difference. The preponderance of the evidence is, in my opinion, less consistent with a strictly environmental hypothesis than with a genetic hypothesis.”

The response rate for the survey was 65% and most respondents rejected a genetic explanation.

However, the question Friedrichs asked was heavily loaded because it associated the viewpoint with a controversial figure during the height of their notoriety, and the quote was not worded in a particularly innocuous way.

The earliest relevant research I am aware of comes from Sherwood and Nataupsky (1968) who had two people independently rate the conclusions of 82 researchers who had published work on racial intelligence differences. These researchers also filled out a survey which was then used to see what demographic variables predicted a researcher being more or less likely to support hereditarian conclusions. The two raters had a very high degree of independent agreement (r=.94) supporting the validity of their measure. Their frequency of each result can be seen below.

This research found that older researchers were more likely to publish environmentalist research, supporting the suggestion that environmentalism was more popular in the past.

Thanks a lot to Sean for finding these two old surveys. I didn’t know about them and I had read extensively on the Arthur Jensen affair of the 1960-1970s.

They were mainly interested in why social psychologists generally dislike evolutionary psychology (answer: it’s not left-wing):

The arguments articulated in this chapter are based primarily on data collected from members of the Society of Experimental Social Psychology (SESP) in an IRB-approved survey conducted in July of 2015. These results are supplemented by several decades of our observations and inferences from interactions with fellow social psychologists. Membership in SESP is limited to people who are five years post-PhD and are judged to have made a significant contribution to social psychology. There are slightly more than 1,000 SESP members, most of whom are North American. We surveyed 901 of these members, avoiding people known to have significant administrative duties, known to be retired and no longer actively involved in social psychology, and known to emphasize an evolutionary perspective in their own work. We received 335 responses to our survey, for a response rate of 37.2%. Of these respondents, 33.4% were female (which is representative of the gender distribution of the society it- self ), the average age was 51.5 years, and the average time since completing the PhD was 22.8 years. The complete survey and the raw data are available at https://osf.io/ebvtq/.

Many scholars have argued that social psychologists are on the political left (Haidt, 2011; Inbar & Lammers, 2012; Redding, 2001), and our survey of SESP members corroborates this claim. When asked whom they had voted for (or would have voted for) in the 2012 U.S. presidential election, 305 of our respondents chose Barack Obama (the candidate on the political left), and only 4 chose Mitt Romney (the candidate on the political right). The sample was also skewed with regard to opinions about issues such as abortion and gun control; the mean response was within two points of the liberal end of an 11-point scale and only five individuals (less than 2% of our sample) scored on the conservative side of the scale midpoint.

The first issue we examined was whether perceptions of evolutionary psychology are tied up in racial/ethnic concerns, perhaps because of some of the ways that evolutionary theory has been misused/misunderstood in the past (e.g., Social Darwinism). To address this issue, we asked SESP members how likely they thought it was that members of some ethnic groups were genetically more intelligent (Mean = 26.4%, Mode = 10% likely) or athletic (Mean = 45.1%, Modes = 20 and 50% likely) than members of other ethnic groups. Responses to this item did not predict the residual tendency to endorse evolutionary social psychology, suggesting that SESP members are not rejecting evolutionary social psychology because of their concerns regarding research on ethnicity and race.

So, even among the far left social psychologists, there was a nontrivial among of support for genetic causation when asked anonymously. But we don’t stop there. They posted the data, and we are not lazy. So, I did some plots. Full output: https://rpubs.com/EmilOWK/race_social_psychologists 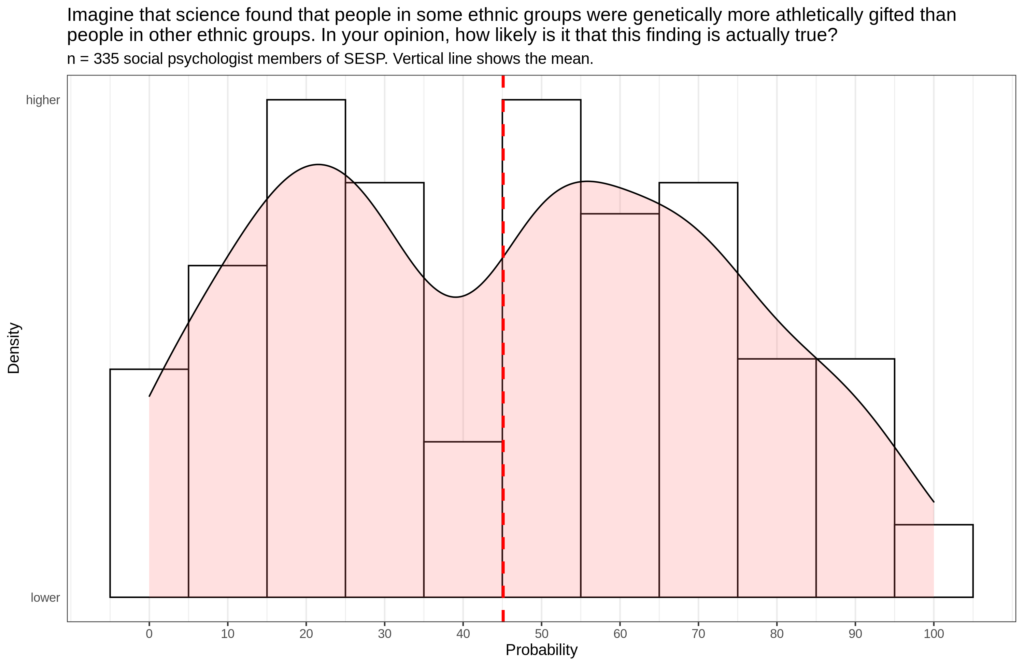 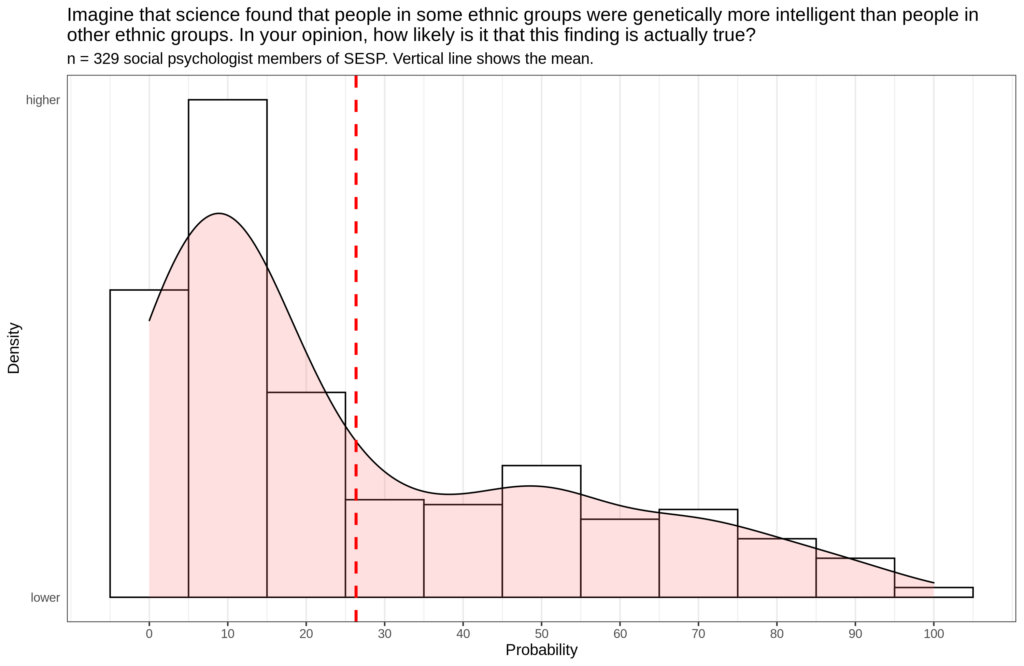 So, interestingly, despite Saini and Rutherford’s efforts, they aren’t even remotely close to convincing their own scientific supporters about the race and athleticism relationship. There is also a substantial number of hereditarian-leaning social psychologists. At least, insofar as we can tell from this suboptimal question. The opinions on these also correlate with self-placement on ideology, but given the massive range restriction, not much can be seen!

Even among a sample of anthropologists, we find 8-14% (BC4=genetic, BC10=Ashkenazim intelligence) who endorse genetic component to race/ethnic differences.

This is a new very well done survey of anthropologists. There’s a bunch of them already on race, but this one is larger and includes two questions on causation of polygenic traits of interest.

We compiled a list of 1,632 anthropologists in all doctoral anthropology programs in the United States using AAA’s Anthro Guide 2013–2014. We included additional faculty on departmental websites and eliminated all invalid, repeating, or unverifiable emails, for a revised list of 1,553 professors.After an email and follow-up in October 2016, we received301 usable surveys, for a 19% response rate.5We hope that our focus on faculty in doctoral programs affords a glimpse into the likely direction of the field, given their role in training future anthropologists. Table 1 reports relevant characteristics of our sample, including demographics and respondents’ self-identified political orientations.Substantively, our survey addresses questions grouped into the following four thematic categories: (1) science and epistemology, (2) moral relativism and advocacy, (3) biology and culture, and (4) controversial legacies. Table 2 lists the questions.As can be seen, we crafted the questionnaire while being attentive to the aforementioned splits over epistemology, activism, and the merits of evolutionary biology. Respondents were asked Likert-type items, that is, whether they“strongly agree,”“agree,”“neither agree nor disagree,”“disagree,”or“strongly disagree”with the 38 statements.6We are cognizant that formulating workable survey questions often invites objections,especially with regard to controversy, so we aimed in our framing to use as familiar and unambiguous language as possible. We begin here with an overview of the findings of the field as a whole, then turn to interpretation of salient and indeed surprising patterns in the data. 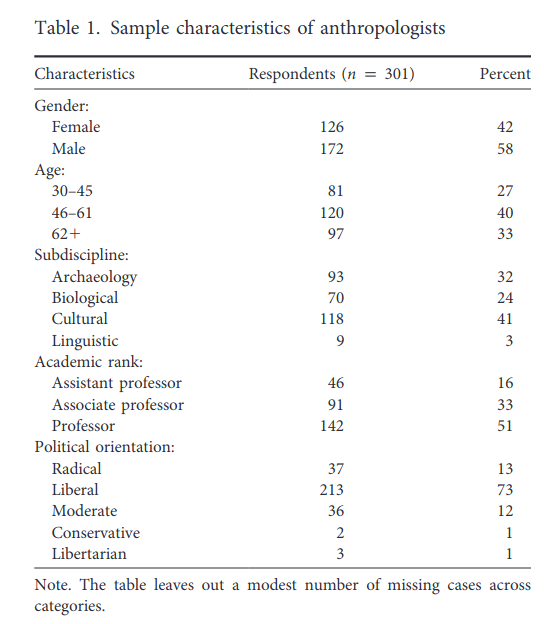 There are two questions we particularly care about:

So the first is a general variant, and the latter is a PC variant — PC because asking about a group with IQs and performance higher than regular Europeans. Results table: 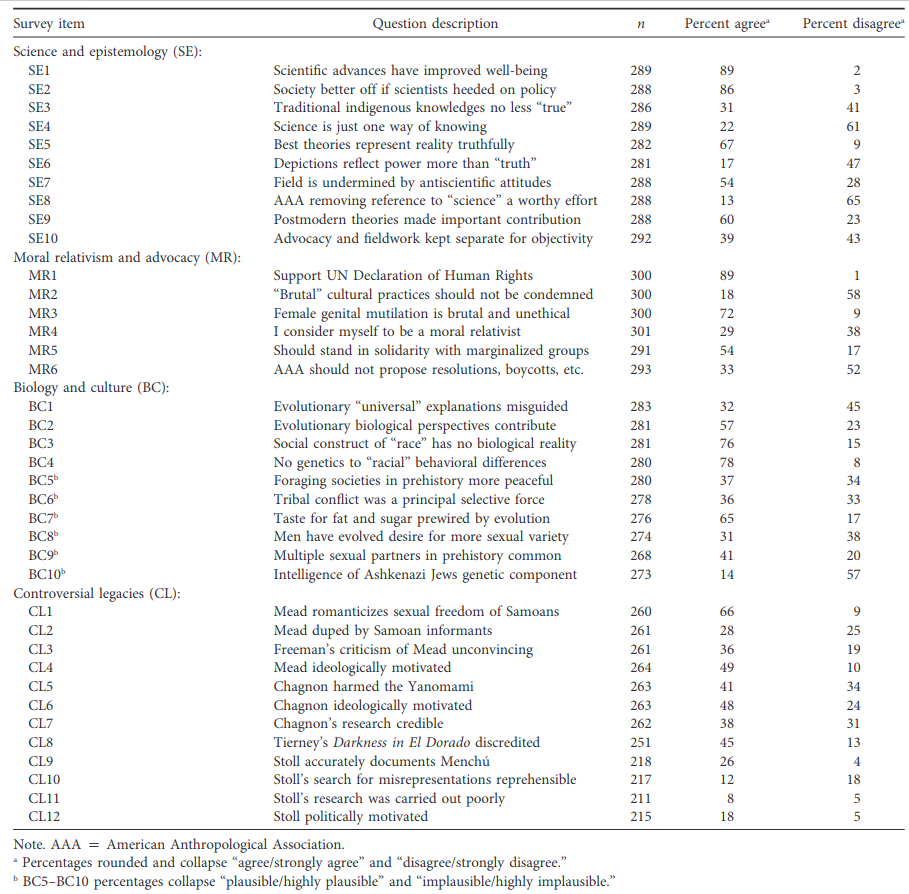 So even they can muster 8% support for the general proposition among the 2% right-wing sample, and 14% for the more PC version. But it gets better, they break it down by type of anthropologist: cultural vs. archaeological vs. biological which is the ranking of their scientificness. Then we see: 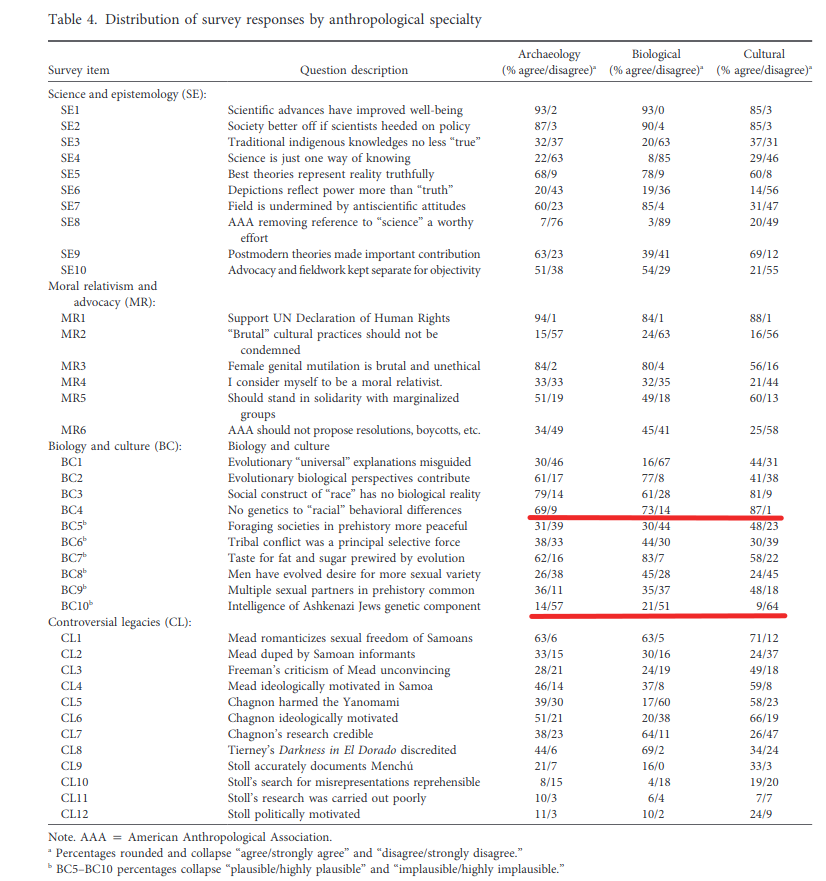 Thus, the more scientific anthropologists are more in line with genetic causation of group gaps.

We can compute these from the General Social Survey. I downloaded the newest (2018) cumulative data file and plotted. We begin simply with the oldest running data series: 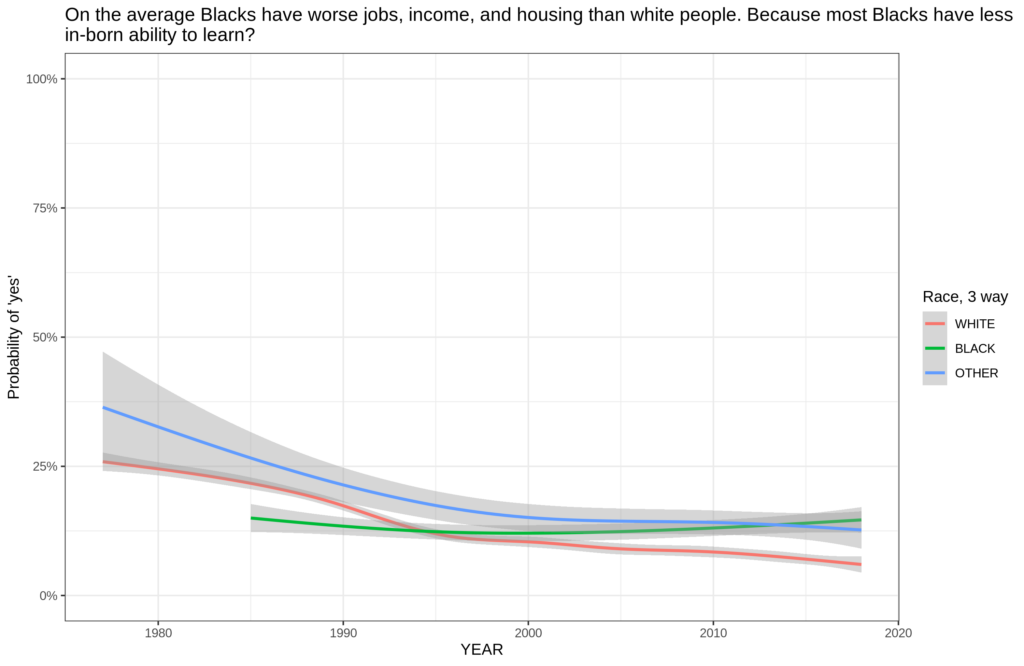 OK, so even in the late 1970s, only about 25% of whites accepted economic hereditarianism. Since 1995, blacks accept it somewhat to now a lot more than whites. That’s very confusing to racism theory. Whoever “other” is, they are also always more accepting.

There is another race variable from later years with more detail: 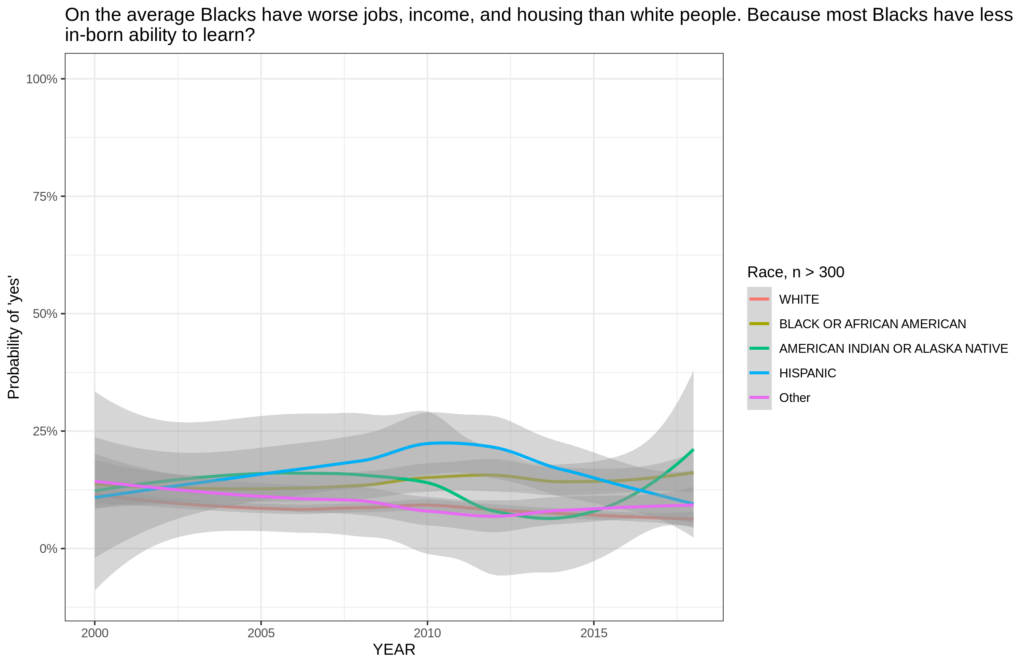 Unfortunately, it is not very helpful. Except that we see here that among the 5 largest groups, whites are the least accepting of ‘inborn’ causation. Let’s drop the time line and just look at all data since 2000 for as many groups as possible:

So here we have it finally, the racism-o-meter. And the winner is… Whi… Eh, Other Pacific Islander? Vietnamese and Samoans. Hmm…

So according to rational belief model, if a view is supported by scientific evidence, it should increase in prevalence among people more familiar with the evidence. Generally, this means 1) smarter people, but especially 2) domain experts. Now the most domain experts on intelligence is, well, intelligence researchers. Multiple surveys of them confirm they are fairly on board with belief in genetic causation. In fact, null-genetics view is a relatively small minority at 16%. Equally, according to political bias theory, people will move their views towards whatever beliefs are deemed more correct by party leaders. In this case, since left-wing politics is dominated the Woke, and the Woke hate group differences, we expect left-wing political ideology to suppress belief in group difference beliefs, especially among the more intelligent (see Kalmoe 2020). And we do see this in our results: the academics (somewhat smart people) with extreme left-wing reviews were fairly against the group differences views. There is also a relationship between political ideology and belief in these, of about r = .50 when there is no range restriction, as in Rindermann 2020 study (see figure below). Furthermore, we can derive the general prediction that if we were to do an actual knowledge test of differential psychology, behavioral genetics, and of course intelligence research, we would see a positive relationship between science knowledge and belief in hereditarianism.

It would be very interesting to see surveys of geneticists and economists, but I haven’t been able to find any surveys. I suspect they are a bit more accepting than the anthropologists. Maybe similar to social psychologists, or more so.