The actual paper: A Mathematical Model of Democratic Elections

“Abstract: Democratic election is the preferred method for determining political administrators nowadays. The
intention is to find the best possible leader in order to improve the group’s competitiveness and success. Though
preferred, democratic election is far from being optimal in this respect, and is increasingly becoming the target
for fraud. A model was developed to scientifically analyze the present electoral system’s insufficiency. It is
based on fauceir assumptions. Its calculations enable principles to be developed that optimize the election
process, while also revealing the limits of elections in societies growing ever more complex, so that in the end
elections have to be replaced by processes similar to what has proved optimal throughout naturally occurring
evolution-natural selection.” (Abstract of the 2012 paper)

It is actually a pretty short paper (7 pages, lots of pics) that is very readable and not particularly technical (it has some standard deviation stuff, probability function, and center of gravity). It is most interesting for its theoretical ideas. The basic idea is that people can be measured, at least in principle, for their leadership abilities (called “capacity quotient”) and that those abilities will form a normal distribution just like IQ. The rational is that the idea is closely related to IQ. It is probably dubious. Most people are not interested in reading up on the various things that one needs to know to be a good leader. I think the distribution is skewed to the left, i.e., most people wud make worse than average leaders. 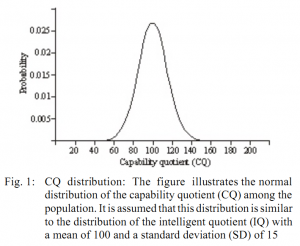 The next idea is that people are completely blind to differences in leadership abilities beyond their own level:

“Next, this objective spectrum is projected
subjectively into  each individual’s mind, given the
empirical knowledge that an individual’s ability to gauge
an other person’s qualities ends at the very point where
their own qualities reside  on the spectrum, or, in other
words, each individual  is blind  to differences in
capabilities better than their own. Again for simplicity, we
define a rule of distortion that, depending on one’s own
position on the spectrum, everything that is left of this
position is reflected almost correctly, while all individuals
right of one’s position on the spectrum are regarded as no
better than oneself. In physics this corresponds to a low-
pass filter (Fig. 2 and 3).”

This is based rather speculatively (and not properly recognized as being speculative) on research by Dunning and Kruger (paper in the beginning). It is correct that people are not good at recognizing skills beyond their own and tend to overestimate themselves, but they are not completely incapable. I also think that there is a reverse effect when the difference in ability between the judge and the person being judged is very large. In other words, i think that a normal person wud judge a person that was very capable of being a good leader as being a worse than average leader. This is becus average people are not familiar with the various reform ideas that a good leader wud introduce, and are probably hostile to such reform ideas. I am thinking about reform ideas such as: spelling/language reform, democracy/meritocracy/voting reform, copyright+patent laws reform, recreational drug laws reform, etc. Most of these wud be seen as ‘bad’ by average people, but not so much by much above average people. If one factored this factor into the model in some way (any Maple programmers reading this are encouraged to contact me!) then the effect on choosing better than average leaders wud be even smaller, perhaps nonexistent, or *shudder* negative! I dont know for sure without running the data.

Some of the other parts are more dubious but still cool:

“The more an individual’s capabilities are shifted to
the left of the  spectrum the more convinced that
individual will be that all people are the same. This is the
objective reason why socialist sociological theories are
more deeply rooted in less-educated people. Being aware
of this fact, communist parties sought support among
blue-collar workers, whom they called the working class
(KPCC, 1961; Honecker, 1967; Ponomarev, 1970).”

Austrian economics: worse than expected — Review of Democracy, the God that failed (Hoppe)