Very useful book. I had read about it in multiple sources. It is a history of attempts to cure the retarded and in general raise intelligence. The answer to the question “how much can we boost intelligence?” is still, as Jensen gave in 1969 (!) “not much”.

In 1962 a little-known chemist, Nikolai Fedyakin, working in a small techno­

logical institute in an isolated region of Russia, produced from ordinary

incident is drawn from Franks’s [1981] fascinating book, Poly water). While

liquid, and over a period of about a month this secondary column of liquid

grew to about 1.5 mm in length. This new liquid had a higher density than

the presumably pure liquid from which it had spontaneously separated, and

it had other remarkable properties as well.

After Fedyakin had published his finding we hear little more about him.

work and published a number of additional experiments describing this

remarkable new anomalous water, or polywater (a polymerized form of

water), which was said to be a new and more stable form of water; for even

when removed from the capillary tube, polywater continued to exhibit its

peculiar properties and somehow must have retained its unusual molecular

and the solid that did form was not ice. One possibility that was repeatedly

water at all. But Deryagin and others were extremely careful and dismissed

the idea that the results were due to impurities. From 1962 to 1966 Deryagin

and his colleagues published 10 papers, refining their methods and using

When in 1966 Deryagin presented his findings to international societies,

scientists outside the Soviet Union began to show greater interest, and

additional mysterious results were reported. One scientist called the find­

ings the most important physical-chemical discovery of the century, and

many agreed. A letter published in the prestigious British journal Nature

helped to spread the word, and by 1968 the mass media had been infected,

first in Germany, then in Great Britain and the United States.

The structure of this new form of water was heatedly debated. Confirming

experiments indicated that the spectra of anomalous water were different

than those of ordinary water. The U.S. Office of Naval Research, sensing

an important area of research (think of the military applications), contrib­

uted financial support, and many scientists shifted their line of research in

order to study polywater, frequently with support from various federal

granting agencies. In 1969, a publication in Science, the American equiva­

lent of Nature, confirmed the existence of this newly found substance, and

spectroscopic analysis gave no evidence for any contamination from the

capillary tubes or by oils or greases. Heated debate and increased activity

ensued, and the Western press hastened to claim American priority for this

revolutionary discovery. A warning was published in Nature that polywater

too late; the more stable poly water will grow at the expense of ordinary

water. In time, all water will be converted into polywater! This in spite of

few millionths of a gram. Nevertheless, the popular press underscored the

dangers, and entire scientific meetings were given over to the subject.

Elaborate theories were introduced to explain the structure of polywater.

The publication list was substantial. From 1962 to 1974, in the United

States alone there were 115 research publications and 112 popular articles,

comments, and reviews, and there were 285 polywater-related publications

Inevitably, the truth won out. In late 1969, in an article in Nature, the

suggestion was again raised that polywater was nothing more than water

contaminated by soluble components of the glass or quartz capillaries

despite the great care taken to keep the water pure. Because there were

difficult to analyze, but a 1970 paper in Science reported that polywater

contained a number of inorganic substances, including 20- to 60% sodium,

as well as potassium, chloride, sulfate, and traces of other elements. An

international conference on polywater was called in 1970, for by now

almost every issue of Science and Nature contained something about

polywater. At the conference, Deryagin maintained that careless work

accounted for the presence of contaminants, but many scientists who had

defended the existence of polywater began to recant. In 1973, Deryagin

impurities rather than to polymeric water molecules.

Of the 107 comparisons on Raven’s test, 5 significant differences favored

there were no reliable differences. It is very clear that experience in Follow

Through programs had no effect on intelligence, as measured by the

Assessment of the “planned variation” aspect of Project Follow Through

also produced unexpected results. A major goal was to compare the

effectiveness of different educational models, but the results indicated

that differences between sites using the same model were much greater

than differences between the models! Apparently our theories are rela­

tively insignificant compared with the practical effects of the inter­

An analogy of the https://en.wikipedia.org/wiki/Dodo_bird_verdict

The reason for it is the same: the theories these educational ideas were based on were mostly wrong, just like in psychotherapy. If a true theory turns up, it shud have differential validity (just like CBT for psychotherapy).

In their follow-up through ages 14 and 15, the project workers obtained

IQs on 89% of the original sample. The results are shown in Figure 1, where

apparently the “waves” have been combined. The IQs at ages 3 to 10 are

derived from the Stanford-Binet, 1960 form, whereas at age 14 they are

from the WISC. These results are typical of the course of IQs in many early

intervention programs: There is a sharp initial rise in IQ for the preschool

children, followed by a gradual decline until there are no longer any

differences between control and experimental groups. Notice that here, as

in the Early Training Project, the experimental/control difference begins to

adjusted upward because the WISC generally measures lower than the 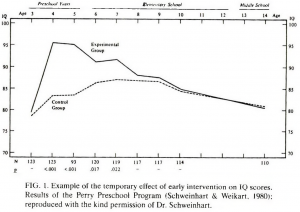 Good figure to refer to. Compare with the know well known fact that heritability increases with age.

leap beyond their data to make exorbitant claims, that the entire field of

some areas of psychological research are “harder” than others. Certain

domains of psychology, interested in preventing and improving retarded

intelligence, have received substantial funding, commensurate with the

human importance and difficulty of their mission. But their publications

indicate that, in this area at least, we are still in the dark ages, and dark ages

Paper: Characteristics and Problems of the Gifted neural propagation depth and flow motivation as a model of intelligence and creativity