For those who have been living under a rock (i.e. not following my on Twitter), John Fuerst have been very good at compiling data from published research. Have a look at Human Varieties with the tag Admixture Mapping. He asked me to help him analyze it and write it up. I gladly obliged, you can read the draft here. John thinks we should write it all into one huge paper instead of splitting it up as is standard practice. The standard practice is perhaps not entirely just for gaming the reputation system, but also because writing huge papers like that can seem overwhelming and may take a long time to get thru review.

So the project summarized so far is this:

This is where we are. Basically, the data is all there, ready to be analyzed. Someone needs to do the other part of the grunt work, namely running all the obvious tests and writing everything up for a big paper. This is where I come in.

The first I did was to create an OSF repository for the data and code since John had been manually keeping track of versions on HV. Not too good. I also converted his SPSS datafile to one that works on all platforms (CSV with semi-colons).

Then I started writing code in R. First I wanted to look at the more obvious relationships, such as that between IQ and ancestry estimates (ratios). Here I discovered that John had used a newer dataset of IQ estimates Meisenberg had sent him. However, it seems to have wrong data (Guatemala) and covers fewer relevant countries (25 vs. 35) vs. than the standard dataset from Lynn and Vanhanen 2012 (+Malloyian fixes) that I have been using. So for this reason I merged up John’s already enormous dataset (126 variables) with the latest Megadataset (365 variables), to create the cleverly named supermegadataset to be used for this study. 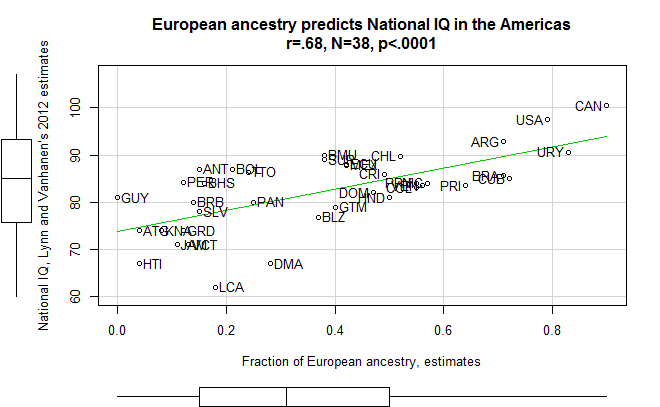 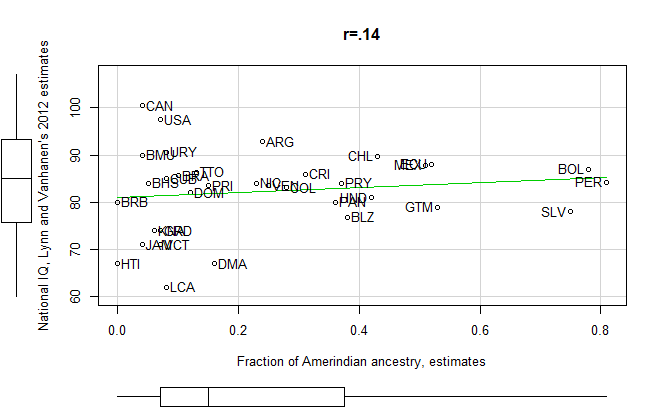 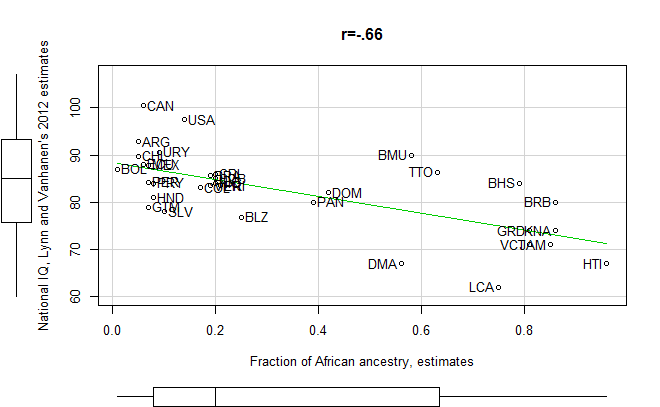 So the reader might wonder, what is wrong with the Amerindian data? Why is about nill? Simply inspecting it reveals the problem. The countries with low Amerindian ancestry have very mixed European vs. African which keeps the mean around 80-85 thus creating no correlation.

So my idea was this, as I wrote it in my email to John:

Hey John,I wrote my bachelor in 4 days (5 pages per day), so now I’m back to working on more interesting things. I use the LV12 data because it seems better and is larger.

One thing that had been annoying me that was correlations between ancestry and IQ do not take into account that there are three variables that vary, not just two. Remember that odd low correlation Amer x IQ r=.14 compared with Euro x IQ = .68 and Afr x IQ = -.66. The reason for this, it seems to me, is that the countries with low Amer% are a mix of high and low Afr countries. That’s why you get a flat scatterplot. See attached.

Estimates of IQ directly from ancestry
But instead merely looking at it via correlations or regressions, one can try to predict the IQs directly from the ancestry. Simple create a predicted IQ based on the proportions and these populations estimated IQs. I tried a number of variations, but they were all close to this: Euro*95+Amer*85+Afro*70. The reason to use Euro 95 and not, say, 100 is that 100 is the IQ of Northern Europeans, in particular the British (‘Greenwich Mean IQ’). The European genes found in the Americans are mostly from Spain and Portugal, which have estimated IQs of 96.6 and 94.4 (mean = 95.5). This creates a problem since the US and Canada are not mostly from these somewhat lower IQ Europeans, but the error source is small (one can always just try excluding them).

So, does the predictions work? Yes. 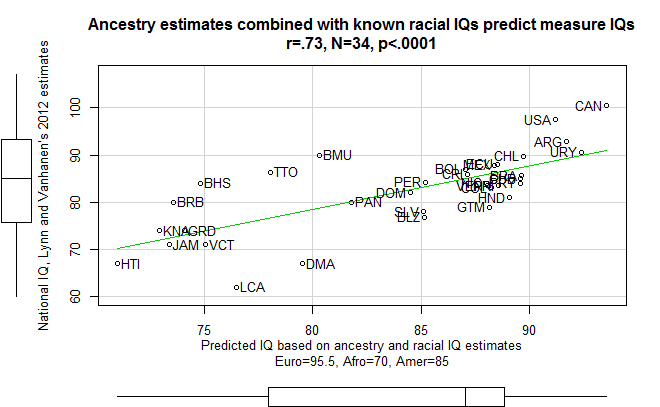 Now, there is another kind of error with such estimates, called elevation. It refers to getting the intervals between countries right, but generally either over or underestimating them. This kind of error is undetectable in correlation analysis. But one can calculate it by taking the predicted IQs and subtracting the measured IQs, and then taking the mean of these values. Positive values mean that one is overestimating, negative means underestimation. The value for the above is: 1.9, so we’re overestimating a little bit, but it’s fairly close. A bit of this is due to USA and CAN, but then again, LCA (St. Lucia) and DMA (Dominica) are strong negative outliers, perhaps just wrong estimates by Lynn and Vanhanen (the only study for St. Lucia is this, but I don’t have the norms so I can’t calculate the IQ).

I told Davide Piffer about these results and he suggested that I use his PCA factor scores instead. Now, these are not themselves meaningful, but they have the intervals directly estimated from the genetics. His numbers are: Africa: -1.71; Native American: -0.9; Spanish: -0.3. Ok, let’s try: 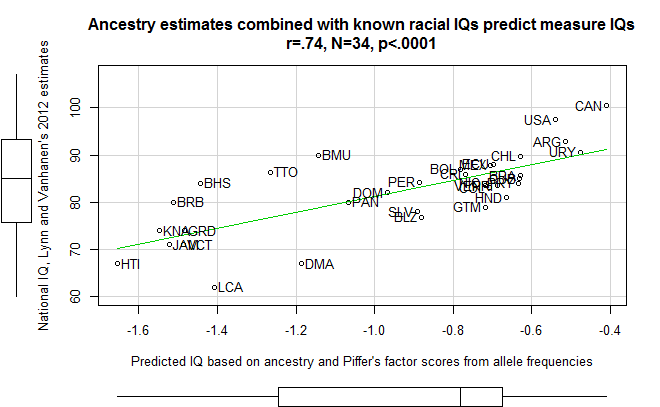 Astonishingly, the correlation is almost the same. .01 from. However, this fact is less overwhelming than it seems at first because it arises simply because the correlations between the three racial estimates is .999 (95.5