In the review of a paper submitted to ODP some time ago, the issue of a general extremism factor in religion came up. Unfortunately, Dutton deleted the submission thread, so the discussion is forever lost to history (possibly could be recovered from backups of the forum, but not worth the trouble; Yes I looked at the Wayback Machine with no luck).

Specifically, the topic was if and how one could rank order Christian denominations on a more/less extremist scale. Much discussion about them actually assumes this pattern but as far as I know, it has not yet been examined empirically. I see two ways to examine it empirically:

1. A person-level approach
Person-level data where their beliefs re. a number of matters are given as well as their denomination. This allows for the calculation of mean acceptance rates of these beliefs within each denomination. These mean acceptance rates may then be factor analyzed to see if there is a general factor. For this to work, one would need at the very least 3 religious beliefs of central importance re. extremism (e.g. young earth creationism, stance towards homosexuals, atheists, abortion, sex outside marriage, freedom of speech wrt. religious criticism). Furthermore, one will need a number of different denominations, I’d say as least 10.

2. A denomination-level approach
Alternatively, one could examine it if one could find official beliefs from each denomination re. a range of issues. Critically, these must be expressible in numerical forms because that is required for factor analysis to work. Because the beliefs of persons belonging to a denomination often conflict with official beliefs (e.g. in Catholicism), the first approach is probably better.

Religious beliefs among Muslims
I was recently reminded of the above due to re-seeing Pew Research’s large-scale study of the beliefs of Muslims in their home countries. The dataset is publicly available and is fairly massive: 250 variables and a sample size of 32.6k. The questions cover socioeconomic variables as well as a large number of questions about stuff like Sharia:

We see that there is a wide variety of beliefs, both within and between countries. Because persons can be grouped by country, this makes it possible to conduct factor analysis both at the case-level (within each country or pooled) and at the country-level. Islam does not have that many denominations, so a denomination-level analysis does not seem possible.

Predictive validity in country of origin studies
My studies of immigrant performance in Denmark, Norway, Finland and the Netherlands have shown that Islam prevalence in the homeland has some predictive validity for the socioeconomic outcomes of the migrants. If some of this predictive validity is due to religious conflict or religious extremism, then the degree of extremism in the home country should be a moderating (interaction) variable. It doesn’t initially appear to be the case because the major outlier with regards to socioeconomic performance is usually Indonesia, but as we can see above, they seem to be fairly extremist in their beliefs, at least with regards to Sharia.

A very quick look
Examining the factor structure of the religious beliefs require a number of hours dedicated to re-coding variables. This is because for some questions, they were only asked if they interviewee answered a particular way to an earlier question. I don’t have time to do this right now. I’m hoping posting this will inspire someone else to dig into it (write me an email/direct tweet/etc.).

However, to show that the idea is fruitful I did a little analysis. I used the following variables:

They were picked because they stood out to me as useful when I was scrolling down the list of variables, not because I examined all variables and handpicked these. There should be many more useful variables (good! because we like to extract general factors from indicators of a wide variety).

I re-coded them all so that higher values correspond to more extreme religious beliefs as judged by me, e.g. unacceptability of children marrying Christians (Q37-38). “Don’t know” and “refusal” were coded as missing. One could recode “don’t know” as the mean of each scale instead, perhaps, but this would require some more work from me.

Then factor analysis was run as usual. Results are shown further below. A general factor seems confirmed. I hereby dub it general religious factor (GRF), hopefully no one has used that term or letter combination yet (not true according to Google!). There was a lot of missing data however because not all interviewees wanted to answer all questions and not all questions was asked in all countries. We can impute this data (takes 11 mins on my computer, large dataset!). This does not change the general pattern of the results (good, otherwise the imputation would be introducing error), but it does allow us to calculate a mean GRF score for every country (i.e. mean of each case from that country; not taking weights into account). 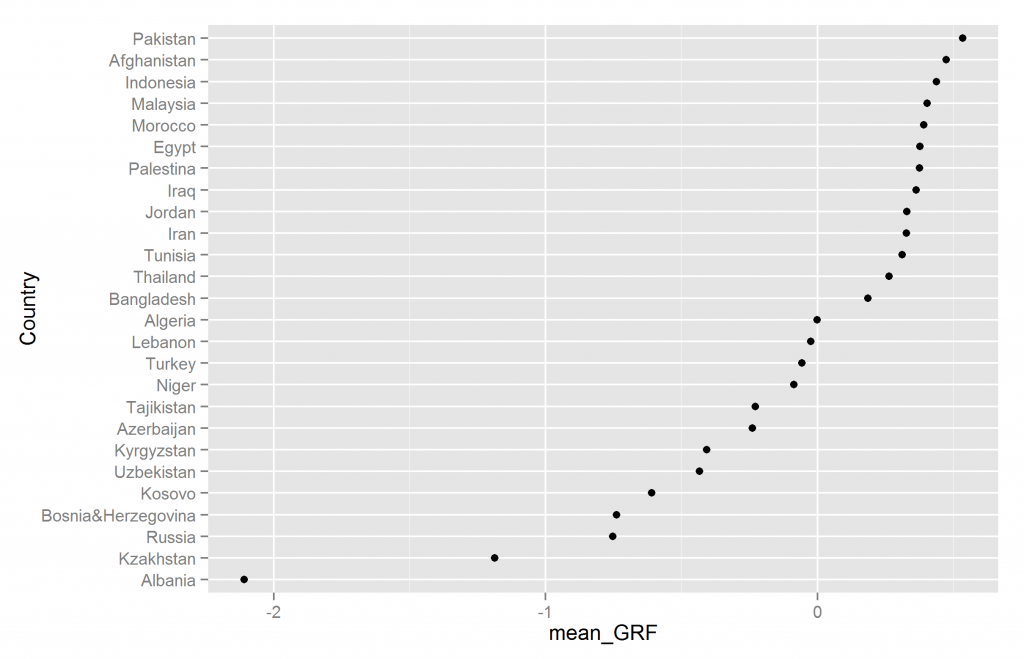 Aside from Indonesia, which I had heard was less extremist, these results are not that surprising. The Muslim populations in central Asia and Europe are less extremist than those in MENAP.

Country-level GRF
Next up is calculating the country-level data. To do a country-level analysis, we need the mean score for each variable for each country. This is fairly tedious to calculate by hand or low-level code, but Hadley has made it fairly easy with plyr (or dplyr). This reduces the dataset to a 26 x 17 matrix from the original 32.6k x 17. I factor analyzed it as before. For comparison, we plot the loadings together: 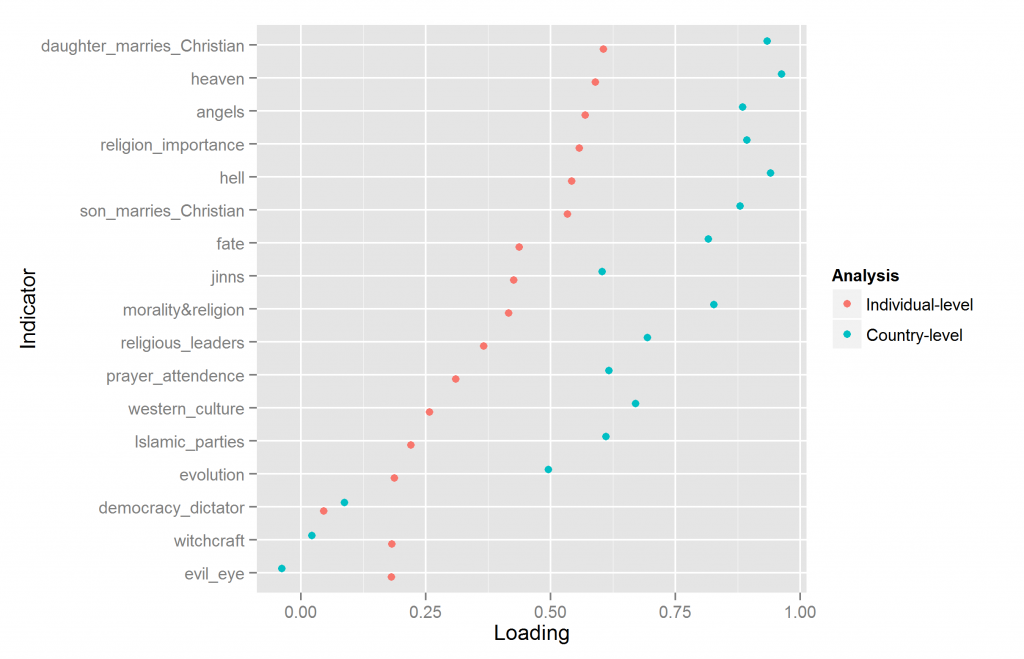 Aside from the generally stronger loadings at the country-level (common finding), loadings are fairly similar. Factor congruence is .98, correlation is .87. At the country-level, only one variable has a negative loading and only slightly (believing in the existence of evil eyes, a belief not central (included in?) to Islam as far as I know). 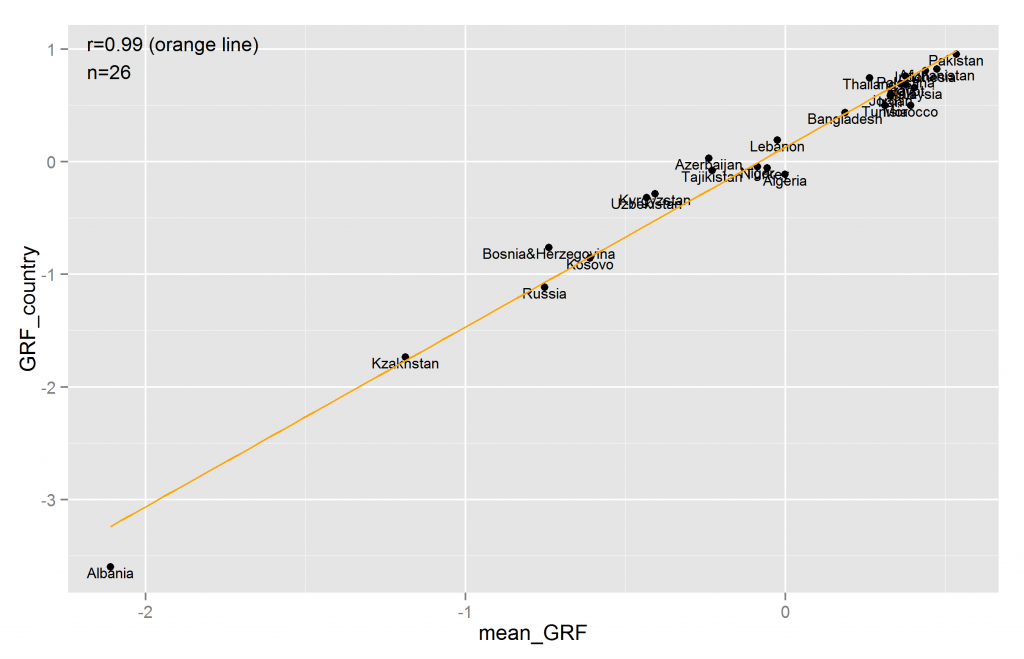 The findings are essentially the same whether we analyze at individual-level and then aggregate (x-axis), or aggregate and then analyze (y-axis). This is not a spurious finding as loadings can change quite a bit between levels depending on the way the data are aggregated.

There is a lot more one could do with this but I will leave it here for now. If someone knows of a suitable open access/science journal to publish this in, let me know. I could use Winnower, but I want some input from people who actually study religion in a comparative religi(on)ology.