The topic came up whether people who believe in one conspiracy theory also believe in other theories. Probably, but let’s find some data!

The first question was “There has recently been a good deal of interest in the assassination of President John Kennedy. Do you think it likely that President Kennedy was killed by an organized conspiracy, or do you think it more likely that he was killed by a lone gunman? Sixty-nine percent of the respondents thought it likely that Kennedy had been killed by a conspiracy, 14% by a lone gunman and 17% volunteered that they were uncertain. These figures are close to those in the New York Times/CBS News national survey (Times, 1992) which used very similar question wording.

The respondents were then asked their opinions about nine other conspiracies which had been in the news lately. A four point scale was used, ranging from “definitely true” and “probably true” to “probably false” and “definitely false.” “Don’t know” was not offered as an alternative, but was recorded when the respondents volunteered it. This question wording encouraged respndents to give their best guess as to the truth of a conspiracy, while relying the distinction between “probably” and “definitely” to distinguish between hunches and strong beliefs. The items and the weighted percentages are in Table One.

Responses to Survey Items on Conspiracies

3. “The AIDS virus was created deliberately in a government laboratory.”

7. “The FBI was involved in the assassination of Martin Luther King.”

8. “Ronald Reagan and George Bush conspired with the Iranians so that the American hostages would not be released until after the 1980 elections.

The author himself notes:

Belief in Conspiracies as a Generalized Dimension

There is remarkably little psychological literature on belief in conspiracy theories. Graumann (1987: 245) observed that this is a “topic of intrinsic psychological interest that has been left to history and to other social sciences.” Historians (Groh, 1987) and sociologists (Lipset and Raab, 1970) find that conspiratorial thinking has been central to anti-semitic and other author­itarian belief systems, and to many social movements in both Europe and the United States. A well known historical discussion by Hofstadter (1965) argued that there is a distinct paranoid “style” in American politics. Despite this historical evidence, conspiratorial thinking was not part of the author­itarianism syndrome as originally conceptualized by Adorno, et al. (1950), and has not been addressed in the subsequent research on author­itarianism or related social psychological constructs.

Given this lack of prior empirical research, our first goal was to determine to what extent there is a generalized tendency to believe in conspiracies. The matrix of correlations between the nine conspiracy theory items is shown in Table Two. The table shows a moderate to high level of correlation between many of the items, including several that have no strong logical or topical connection. Most of the correlations are statistically significant, as indicated in the table. A factor analysis determined that the first principal factor explained 37.8% of the variance common to these items. (For the white respondents alone, the first principal factor explained 32.5% of the variance; for the black alone it explained 39.9%). These findings offer strong support for the hypothesis that belief in conspiracies is a generalized ideological dimension.

If we factor analyze the matrix, we get this (Standard): 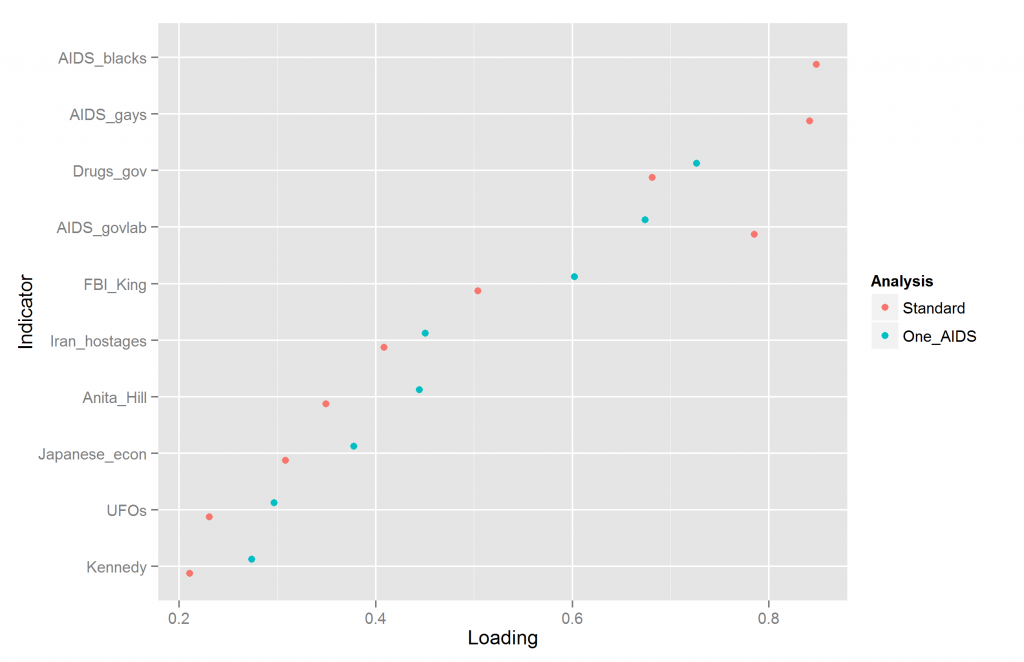 The problem being that there is a cluster of AIDS beliefs which dominate the general factor (general conspiracy theory belief factor, GCTBF??? CTF). One could make them into a scale with matrix algebra William Revelle tells us, but I’m not sure how to do this. If someone knows, write to me.

One cannot just create the scale using the case-level data because these aren’t given by the author. Instead, however, one could use a hierarchical solution, which gives the boring result that there is an AIDS group and an everything-else group. So, a final solution is simply to remove one of the AIDS variables. I removed the ones that are most about targeting a specific group (gays and Africans). The last is problematic because Africans form a substantial part of the sample and presumably people are influenced about whether their own group is the target of the conspiracy theory. The result is also shown above. Interestingly, the results are pretty similar, so perhaps there is something special about the AIDS or drugs conspiracy beliefs to the conspiracy belief nexus.

What correlates with the general conspiracy theory factor (CTF)?

Correlates of Belief in Conspiracies

These ten items were used to construct a summated scale of Belief in Conspiracies. This scale had a reliability coefficient (alpha) of .78, confirming that the items have enough variance in common to justify treating them as a scale for this population. The scale was then used to investigate some of the correlates of belief in conspiracies as an attitude dimension.

Belief in Conspiracies was not significantly correlated with gender, educational level or occupational category. There was a weak (r = -.21) negative correlation with age (all correlations mentioned in the text are significant at the .001 level). Attendance at the movie JFK was not correlated with Belief in Conspiracy scores. There was a strong correlation (r = .44) with minority status (defined as white=1, hispanic=2, black=3) and with black race as a dummy variable (r = .42).

The minority status variable was treated as linear for purposes of correlational analysis since this made sense conceptually (hispanics are less stigmatized as a minority than are blacks) and empirically (hispanics were intermediate between whites and blacks in their scores on the variables used in this study). Although the Census treats race and Hispanic ethnicity as two different variables, the sociological reality, at least in New Jersey, is that these are three distinct social groups.

Belief in Conspiracies was significantly correlated (r = .43) with a three-item scale of “Anomia” (alpha = .49) made up of items taken from the General Social Survey of 1990. These items measured the belief that the situation of the average person is getting worse, that it is hardly fair to bring a child into today’s world, and that most public officials are not interested in the average man. These items tapped into feelings of discontent with the established institutions of contemporary society which were widely observed by pollsters and pundits in 1991 and 1992. A comparison of scores from this sample with those from the national 1990 sample confirmed that Anomia in this sense was higher in 1992 than in 1990.

The Belief in Conspiracies scale was significantly correlated (r = -.37) with a three-item scale of trust (alpha = .57), which asked whether respon­dents felt that they could trust the police, their neighbors or their relatives. The Belief in Conspiracies scale was also significantly correlated (r = .21) with the item “thinking about the next 12 months, how likely do you think it is that you will lose your job or be laid off.”

Presumably, the minority status is a proxy for cognitive ability and lack of trust etc. The lack of results with education level or occupational category is odd, since these are correlated with cognitive ability. My guess is that it is because of the age variance in the sample and the increase in educational attainment over time and because age x CTF is negative (young people believe in more of them, and I hope this is an age effect, not a cohort effect!). This makes the educational attainment variable noisy. I have no particular hypothesis regarding the occupational variable. 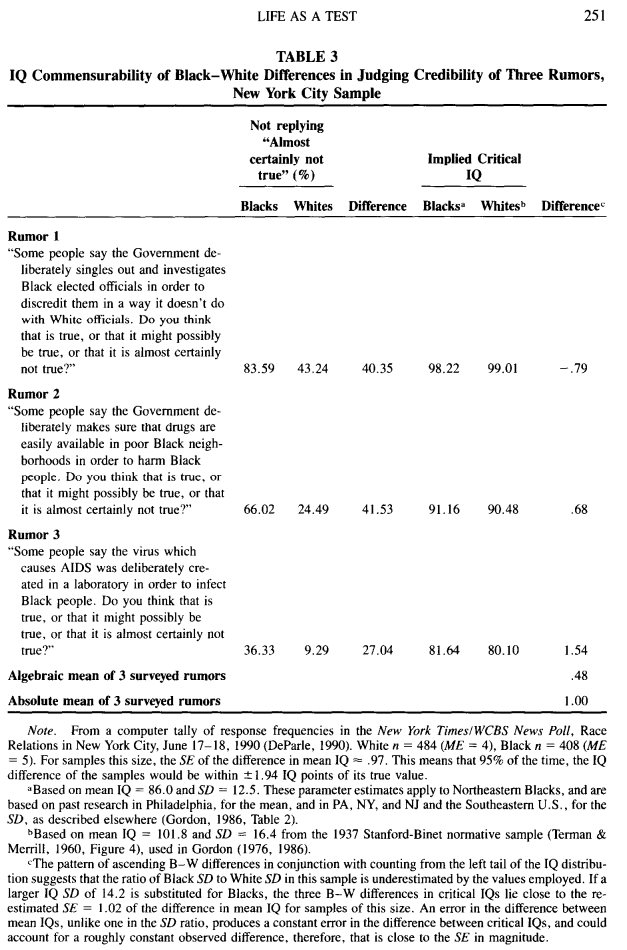 Gordon’s model is that believing in a specific theory (test item) is a probabilistic function (something like probit or logistic) of one’s own cognitive ability. Because the probability of getting a particular item right (i.e. not believing in it), this means that there is a critical IQ at which the probability is 50%. Because the items are not equally hard, this critical IQ is different for different items and this controls how many believe in them. Crucially, however, is that this function is identical or highly similar across groups, who just happen to have different distributions of IQs that go into the functions. The results in his own paper fit fairly well.

Scott Alexander on the isolated demand for moral rigor and genetics