(Broad-strokes modeling of how to think about immigrant performance. Some references are gone because they were written using the Zotero plugin, which I later uninstalled. I have re-added those I could recall.)

Consider the model below: 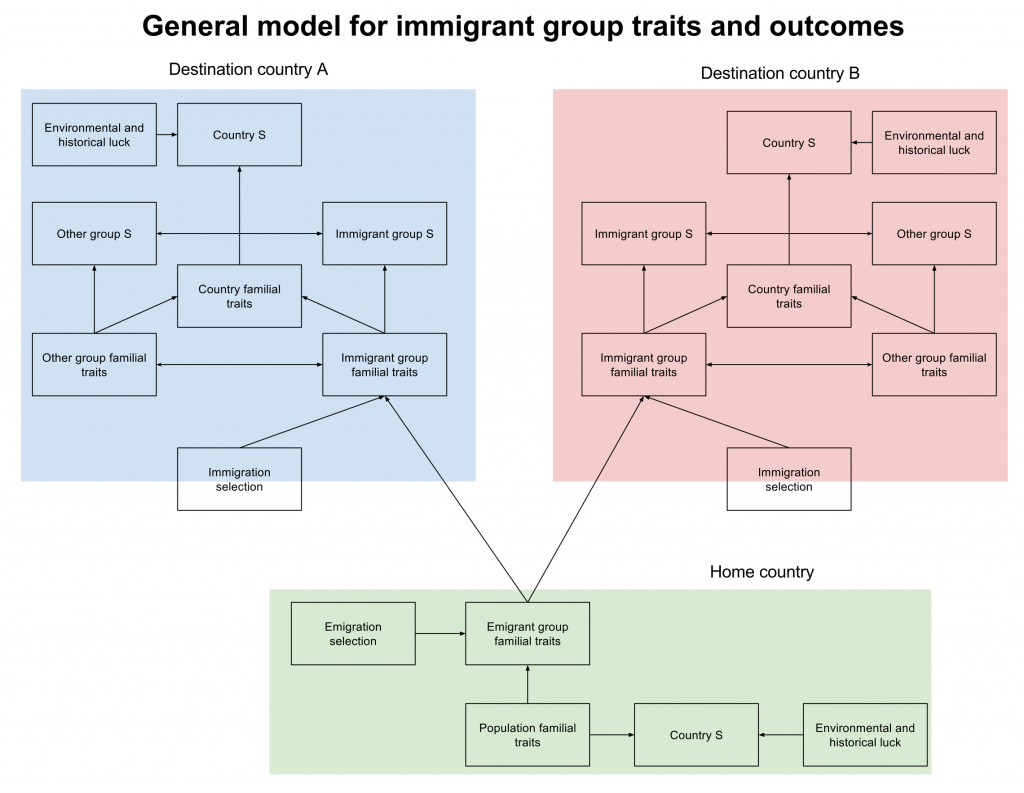 Something much like this has been my intuitive working model for thinking about immigrant groups’ traits and socioeconomic outcomes. I will explain the model in this post and refer back to it or use the material in some upcoming paper (nothing planned).

When persons leave (emigrate) their home country, there is some selection: people who decide to leave are not random. Sometimes, it is not easy to leave because the government actively tries to restrict its citizens from leaving. This is shown in the model as the Emigration selection→Emigrant group familial traits link. Emigration selection seems to be mostly positive in the real world: the better off and smarter emigrate more than the poorer and less bright.

Worse, it is possible that immigration selection in a given country depends on the origin country, i.e. a country-country interaction selection. This wasn’t included in the above model. Examples of this are easy to find. For instance, within the EU (well, it’s complicated), there is relatively free movement of EU citizens, but not so for persons coming in from outside the EU.

The S factor score of the home country (the general factor of socioeconomic outcomes, which one can think of as roughly equal to the Human Development Index just broader is modeled as being the outcome of the Population familial traits and Environmental and historical luck. I think it is mostly the former. Perhaps the most obvious example of environmental luck is having valuable natural resources in your borders, today especially oil. But note that even this is somewhat complicated because borders can change by use of ‘bigger army diplomacy’ or by simply purchasing more land, so one could strategically buy or otherwise acquire land that has valuable resources on it, making it not a strict environmental effect.

Other things could be having access to water, sunlight, wind, earthquakes, mountains, large bodies of inland water & rivers, active underground, arable land, living close to peaceful (or not so much) neighbors and so on. These things can promote or retard economic development. Having suitable rivers means that one can get cheap and safe (well, mostly) energy from those. Countries without such resources have to look elsewhere which may cost more. They are not always strictly environmental, but some amount of their variance is more or less randomly distributed to countries. Some are more lucky than others.

There are some who argue that countries that were colonized are better off now because of it, so that would count as historical luck. However, being colonized is not just an environmental effect because it means that foreign powers were able to defeat your forces overwhelmingly for decades. If they were able to, you probably had a poor military which is linked to general technological development. There is some environmental component to whether you have a history of communism, but it seems to still have negative effects on economic growth decades after.

For immigrant groups inside a host country, however, the environmental effects with country-wide effects cannot account for differences. These are thus due to familial effects only (by a good approximation). To be sure, the other people living in the destination/host country, Other group familial traits, probably have some effect on the Immigrant familial traits as well, such as religion and language. These familial traits and the Other group S then jointly cause the Immigrant group S. This is the effect that Open Borders advocates often talk about one aspect of:

Wage differences are a revealing metric of border discrimination. When a worker from a poorer country moves to a richer one, her wages might double, triple, or rise even tenfold. These extreme wage differences reflect restrictions as stifling as the laws that separated white and black South Africans at the height of Apartheid. Geographical differences in wages also signal opportunity—for financially empowering the migrants, of course, but also for increasing total world output. On the other side of discrimination lies untapped potential. Economists have estimated that a world of open borders would double world GDP.

A path model is always complete which means that all causal routes are explicitly specified. All the remaining links are non-causal, but nodes can be substantially correlated. For instance, there is no link between the home country Country S and immigrant group S but these are strongly correlated in practice. I previously reported correlations between home Country S and Immigrant group S of .54 and .72 for Denmark and Norway.

Most of my studies have looked at the nodes Population familial traits (sub-components Islam belief and cognitive ability) and Immigrant group S (or sub-components like crime if S was not available). Often this results in large correlations: .54 and .59 for Denmark and Norway (depending on how to deal with missing data, use of weighted correlations etc.). Note that in the model the first does cause the second, but there are a few intermediate steps and other variables, especially Emigrant selection (differs by country of origin which reduces the correlation) and Immigrant selection (which has no effect on the correlation).