I had noticed this problem before and tried to build a simulation to show it. Unfortunately, I ran into problems due to not knowing about mathematical statistics (see here).

Suppose the situation is this:

So, we have a causal network where X1 causes both X2 and Y. We also model the measurement error aspect of each variable.

Now, suppose that we don’t know whether X1 or X2 causes Y, and that we plug them into a multiple regression model together with Y as the outcome. If we measured all variables without error, the model would find that X1 predicts Y and that X2 doesn’t.

However, suppose that we can measure X2 and Y without error and X1 with some error. What would we find? We would find that X2 seems to predict Y, despite we knowing that it has no causal effect on Y at all.

For instance, we can simulate this situation in R using the following code:

Multiple regression can also be visualized using path models. So let’s try that for the same models as above. R: 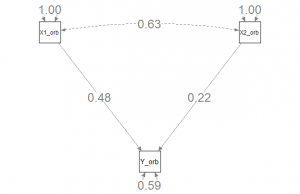 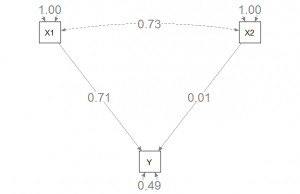 Thus, we see that these show about the same numbers as multiple regression. I think the difference is due to them using different methods of fitting the numbers (sem() uses maximum likelihood by default). So, we have a general problem for our modeling: when our measures have measurement error, this can impact our findings and not just in the way of finding smaller numbers as with zero-order correlations.

One could set up some causal networks and try all the combinations of measurement error in variables to see how it affects results in general. From the above, I would guess that it tends to make simple systems seem more complicated by spreading out the predictive ability across more variables that are correlated with the true causal variables (false positives).