Disclaimer: Some not too structured thoughts.

It’s commonly said that correlation does not imply causation. That is true (see Gwern’s analysis), but does causation imply correlation? Specifically, if “→” means causes and “~~” means correlates with, does X→Y imply X~~Y? It may seem obvious that the answer is yes, but it is not so clear.

Before going into that, consider transitivity. Wikipedia:

Is causality transitive? It seems that the answer should be yes. If A causes B, and B causes C, then A causes C. With symbols:

(the ⊢ symbol means therefore). If causality is transitive, and causality implies correlation, then we may guess that transitivity holds for correlation too. Does it? Sort of.

The transitivity of correlations

If we know rVC and rUV, the upper and lower limits of the possible range of values of rUC are given by the following formulas: [combined to one]

(I rewrote this using rxy, ryz and rxz instead)

It may come as a sad surprise to many to see how very wide is the range of possible values of rUC for any given combination of values of rVC and rUV. The ranges of rUC are shown in Table 8.1, from which it is clear that concurrent validity inspires confidence only when the two tests are very highly correlated and the one test has a quite high criterion validity. Because it is rare to find criterion validities much higher than about .50, one can easily see the risk in depending on coefficients of concurrent validity. The risk is greatly lessened, however, when the two tests are parallel forms or one is a shortened form of the other, because both tests will then have approximately the same factor composition, which means that all the abilities measured by the first test that are correlated with the criterion also exist in the second test. The two tests should thus have fairly comparable correlations with the criterion, which is a necessary inference to justify concurrent validity. 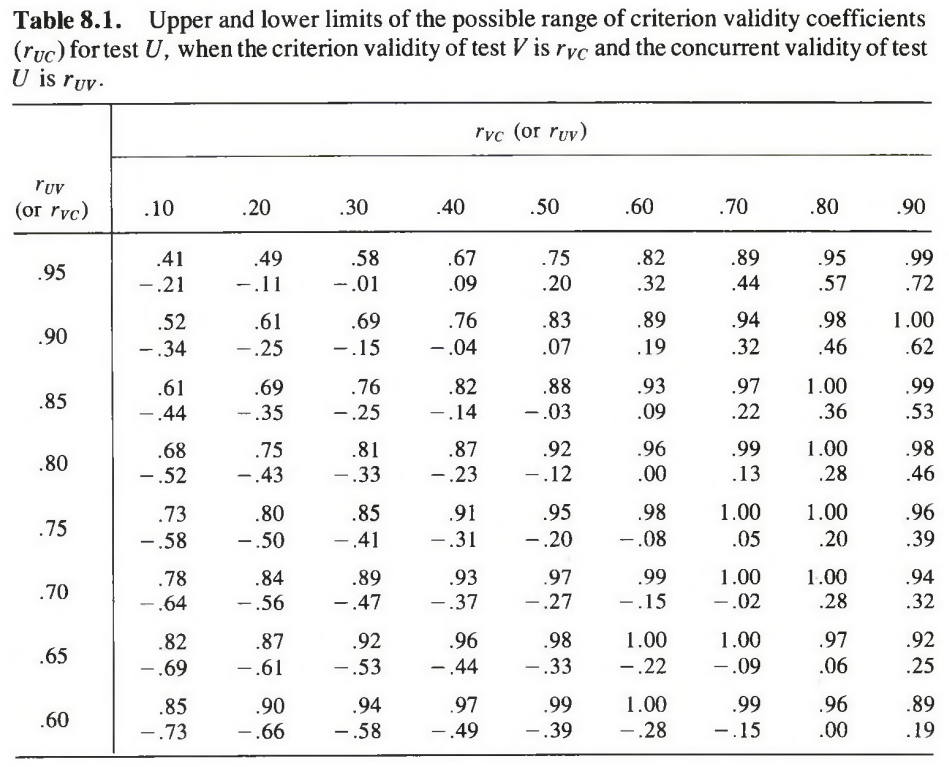 So, the next time you see someone arguing thru (multiples) steps of transitivity for correlations, beware! Given A~~B at 0.7 and B~~C at 0.7, is still possible that A~~C is 0.0!

Visually, one can think of it in terms of variance explained and overlapping circles. If the A and B circles overlap 50% (which is r≈.71) and the same for B and C, then the question of what A~~C is depends on which whether the overlap between A and B is also the area that overlaps B and C. Because the areas are about 50% each (0.72 = 0.49), both complete overlap (r = 1) and no overlap with a slight remainder are possible (slight negative correlation).

Probably, because this argument often comes up, I should make a visualization.

Thanks to Ron for pointing out the error in the original equation I wrote. It was a mistake on my part. I also recalculated Jensen’s table in R, given below. 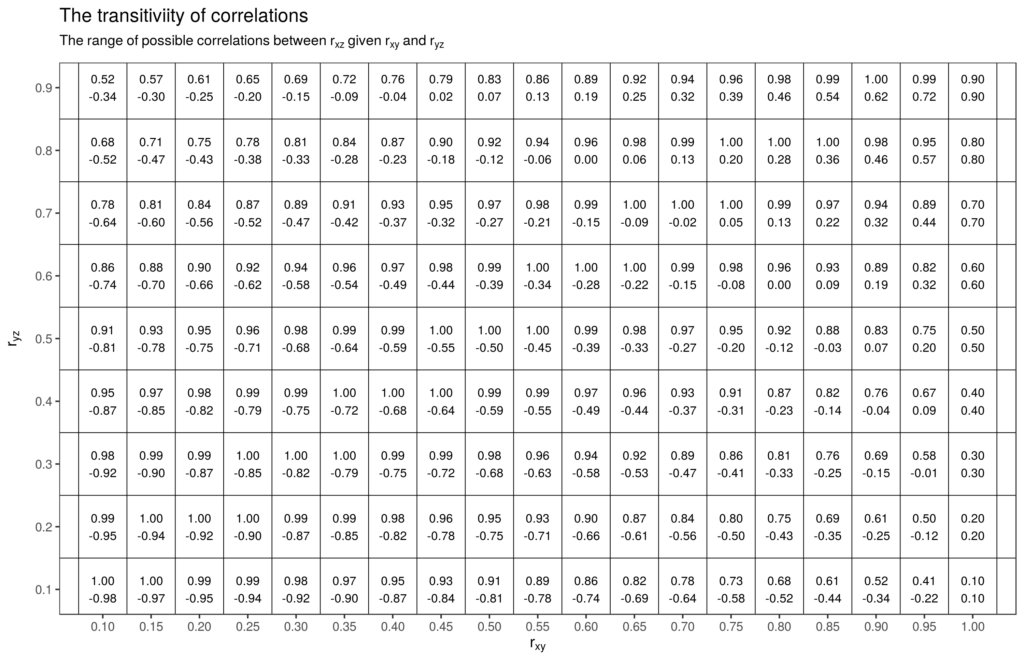