In the interest of publishing null findings: I tried estimating US state IQs from the mean cognitive ability for users in the OKCupid dataset. However, this did not work out. This was a far shot to begin with due to massive self-selection and somewhat non-random sampling.

Actually, what I really wanted was another way to estimate county-level IQs, since Add Health refuses to share that data. But before I could do that, I needed to validate the estimates for something else. The scatterplot can be seen below. The NAEP is from Admixture in the Americas, so it is based on a few years of NAEP data. 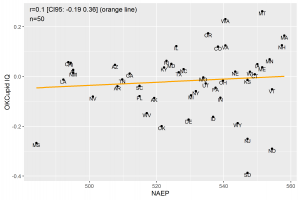 This assumes you have loaded the OKCupid data as d_main and have already calculated the cognitive ability scores.

IQ can be increased by more education but can intelligence? Does it matter?