There is a lot of research on the link between crime and cognitive ability. (For criminal outcomes, see the problems in my previous post.) E.g.

Is the Association between General Cognitive Ability and Violent Crime Caused by Family-Level Confounders? 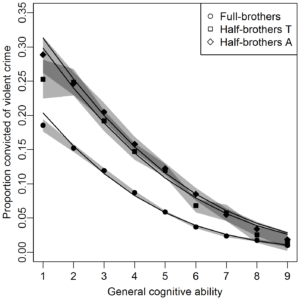 I note that the reduction in the link between siblings is in line with cognitive ability being confounded with other traits that influence crime such as self-control. This idea was also suggested by Peter Frost.

Intelligence and criminal behavior in a total birth cohort: An examination of functional form, dimensions of intelligence, and the nature of offending

The current study contributes to this literature by examining the functional form of the IQ-offending association in a total birth cohort of Finnish males born in 1987. Criminal offending was measured with nine different indicators from official records and intelligence was measured using three subscales (verbal, mathematical, and spatial reasoning) as well as a composite measure. The results show consistent evidence of mostly linear patterns, with some indication of curvilinear associations at the very lowest and the very highest ranges of intellectual ability.

I note that this study did have crime by type and could have analyzed for a general factor, but did not. I also don’t see any numeric values for the strength of the relationships in the article, but one could derive estimates from the reported statistics, I think. E.g. their Table 1 gives the SD of number of crimes committed as 2.67. Assuming the pattern is entirely linear (close approximation), we can take the value of the highest and lowest groups and see how far they are apart in SD on both variables and divide these to get the individual-level correlation. In this case, mean crime by lowest 9-tile is 1.19 and for highest is 0.33 (found in Table A4 at the end). So for crime the d for lowest vs. highest is (1.19-0.33)/2.67=0.32. Their d for cognitive ability is about (9-1)/2.18=3.67. Then we divide and get 0.32/3.67=0.09, the estimated correlation.

Since this is too small (expected value around 0.20), there is probably some bias in these estimates. For one thing, the number of crimes does not follow a normal distribution so using means and SDs is misleading. One should use medians and MADs (robust alternatives). SDs are very sensitive to outliers because they are based on squared values (a common feature of all methods based on squared values such as OLS regression [which minimizes the mean squared error]). Because we divide by the crime SD, this makes the estimated correlation too small. As a quick test of this idea, I simulated some power low distributed data in R (rlnorm) and calculated the SD and MAD: 2.20 and 0.88 (using the default values for simulating data). We see that the MAD is much smaller. We can use this for a quick and dirty re-estimate for the above using the ratio of the SD and MAD, which is 0.88/2.20=0.40. So: 0.32/(3.67*0.40)=0.22, which is in the right ballpark, but still based on means, not medians. Based on some more playing around, it seems that using medians increases the d value by about 70% compared to medians, which would reduce the above estimate of 0.22. However, I cannot calculate how much because they do not give the medians by group. I don’t know. Maybe trying to use normal distribution statistics to estimate a correlation for obviously non-normal data is not a good idea, even if one does use the robust versions. :p

The study I want done and my predictions

What I want to do is something like this:

I believe in making predictions before seeing the data, preferably numeric predictions. I wish to make the following public predictions in case someone does such a study.