Consider the findings from the large UK study I recently blogged (Akarlin blogs it too):

Some of these have steep declines. It’s not just an artifact of the FLynn effect, age really has a strong negative effect on cognitive abilities. Consider the rates of dementia and age: 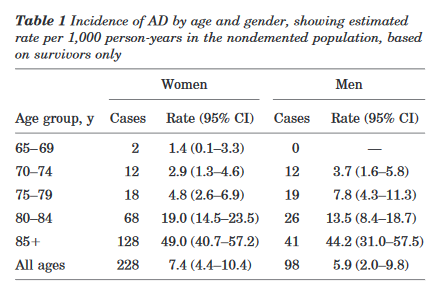 So, by age ≥85 some close to 50% of persons alive have dementia (not counting those that already died of dementia!).

My impression is that most ending aging research is related to non-brain aging just because this is easier. I only follow the field at distance, but my impression is that in the next few decades we will more or less completely beat every non-brain disorder using methods such as bioprinting to replace bodyparts, immunotherapy, early cancer detection/prognosis methods based on genomics similar to NIBT, nanomedicine, and targeted genetic engineering. Problem is that these methods generally do not work well for the brain because 1) we can’t just replace the brain, 2) the blood brain barrier makes it pretty difficult to do stuff in the brain. The best solution I can come up with is a radical one: replace the blood-brain barrier with a better version, presumably based on nanotechnology. This way, we gain control of what enters the brain and what does not. But I suspect this will be a pretty difficult task because the human body’s internal communication systems are extremely complex.

I worry that there will be large gains in lifespan but little improvement in fixing cognitive aging. The result is that society will have a lot of fairly useless old people (we are moving towards that already due to subreplacement fertility). Due to progress in robotics, I think we will be able to handle this, but it’s not a too bright future and reminds me of the WALL-E scenario. If we look at the largest causes of death, we see that 2 of the top 5 for old people are brain related (dementia and strokes), and there seems to be little progress in cures for them.